As CNN's most famous host announces his retirement, a look back at his glory days 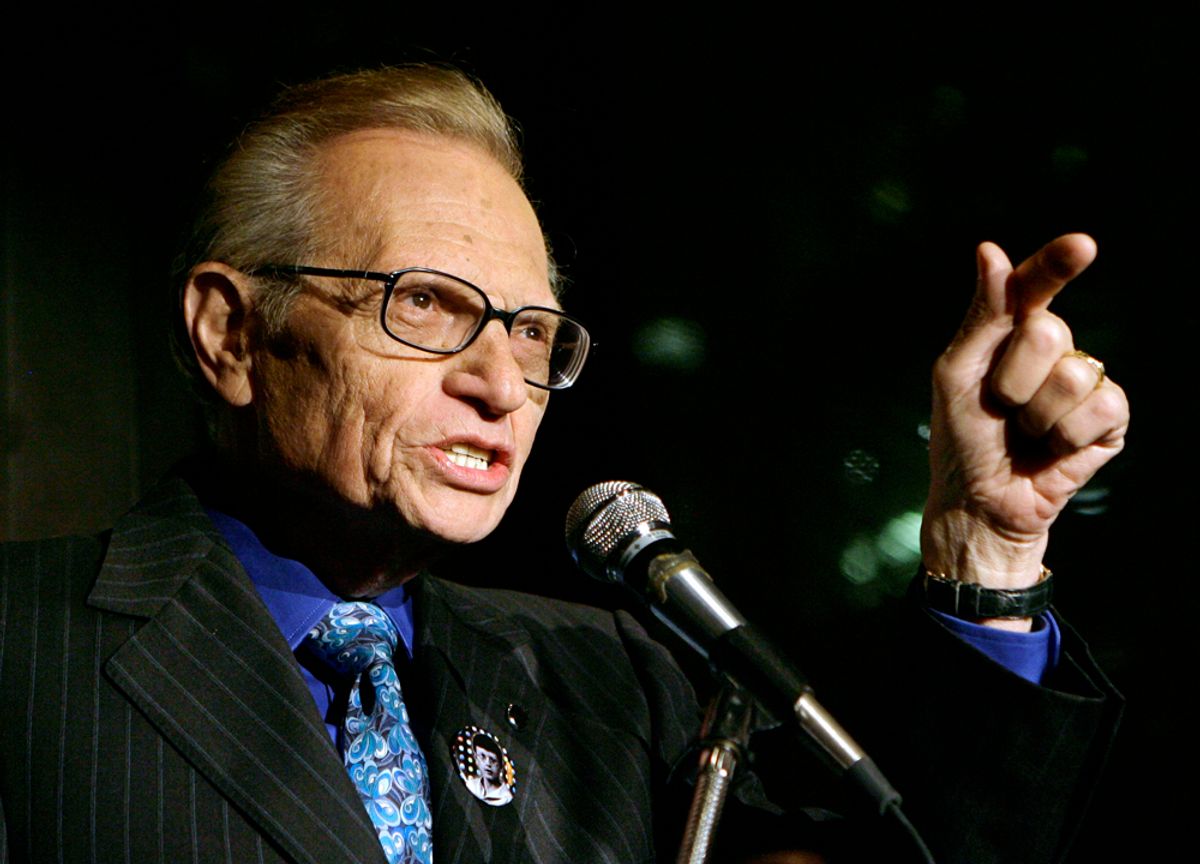 Larry King, as you might have already seen, just announced that he'll give up his nightly CNN show this fall, putting an end to months -- years, really -- of speculation over when (and how) the broadcasting legend would make his exit.

The move, of course, feels long overdue. King has been eclipsed in the ratings by shows on cable channels that didn't even exist when he began at CNN, and his style seems positively archaic. But while you'd never know it if you were introduced to his show this century -- when a typical political discussion would involve Ben Stein, James Carville and a formulaic talk radio host or two -- there was actually a time not too long ago when Larry King drove the national political conversation.

His show began on CNN in 1985, five years after Ted Turner christened "the news channel," and long before the births of Fox News and MSNBC. King was an instant hit, but -- at least in terms of politics -- his transformative moment didn't come until Thursday, Feb. 20, 1992. Politics was in the air: Two nights earlier, Paul Tsongas had held off Bill Clinton in the New Hampshire primary, leaving the Democratic presidential race unsettled. On the Republican side, a suddenly vulnerable George H.W. Bush had been humbled by Pat Buchanan's strong showing (nearly 40 percent of the vote). The country was restive, thanks to a stubborn recession, and none of the candidates seemed to be catching on.

Against that backdrop, King looked at his guest, a diminutive 61-year-old Texas billionaire, and asked him if he might consider seeking the presidency that year. "I'm not asking to be drafted," H. Ross Perot replied, but "if you (the people) want to register me in all 50 states, I'll promise you this: Between now and the conventions, we'll get both parties' heads straight."

Perot's dare struck a chord. Within weeks, an army of volunteers had mobilized in every state, distributing petitions and collecting signatures to put Perot's name on the ballot as an independent. Most of them had never heard of him before he sat down for his King interview. The movement grew. By late spring, Perot was running ahead of both Bush and Clinton in general election trial heats -- uncharted territory for a modern independent candidate. Every story on television and in print that sought to explain the Perot phenomenon started in the same place: Larry King's show.

For the rest of the '92 campaign, King played host to some of the race's most pivotal moments. When Bush and Clinton appeared, the whole media world seemed to stop. What would they say? Would there be another Perot moment? The Perot story fundamentally changed the way his show was regarded. King wasn't a quirky nighttime host anymore; he was a brand-new national media powerhouse.

In the middle of the summer, Perot cracked up and backed out of the race. But by late September, he wanted back in. He called his volunteers to Dallas and invited big names from both the Clinton and Bush campaigns. If the volunteers were impressed with either party's presentation, Perot said, he'd stay out of the race. But if they weren't, he'd get back in. Oddly, the Bushies and Clintonites played along. Just about every reporter in the world was in Dallas for the meeting, but when it was over, Perot said nothing to them. The only interview went to Larry King.

In the final days of the race, Bush sat down for the full hour. He was trailing, but his numbers were -- for the first time -- showing some signs of life. But his old nemesis, Iran-Contra special counsel Lawrence Walsh, had just that day reindicted Caspar Weinberger. All of the old questions about whether Bush, as Reagan's V.P., had been "in the loop" were back. King asked him about it a little, but Bush deflected his queries. But then he went to a caller, who began grilling the president relentlessly -- names, dates, obscure details, penetrating questions. It was George Stephanopoulos, Clinton's press aide. Bush called it a setup. King shrugged and said Stephanopoulos just happened to get through on the 800-number. Either way, the president's last hopes for a comeback win were snuffed out.

King's been a key part of CNN's coverage of every election since 1992. Though his role -- on the network and in the national conversation -- seemed to diminish every time. But he had his moment, that's for sure.