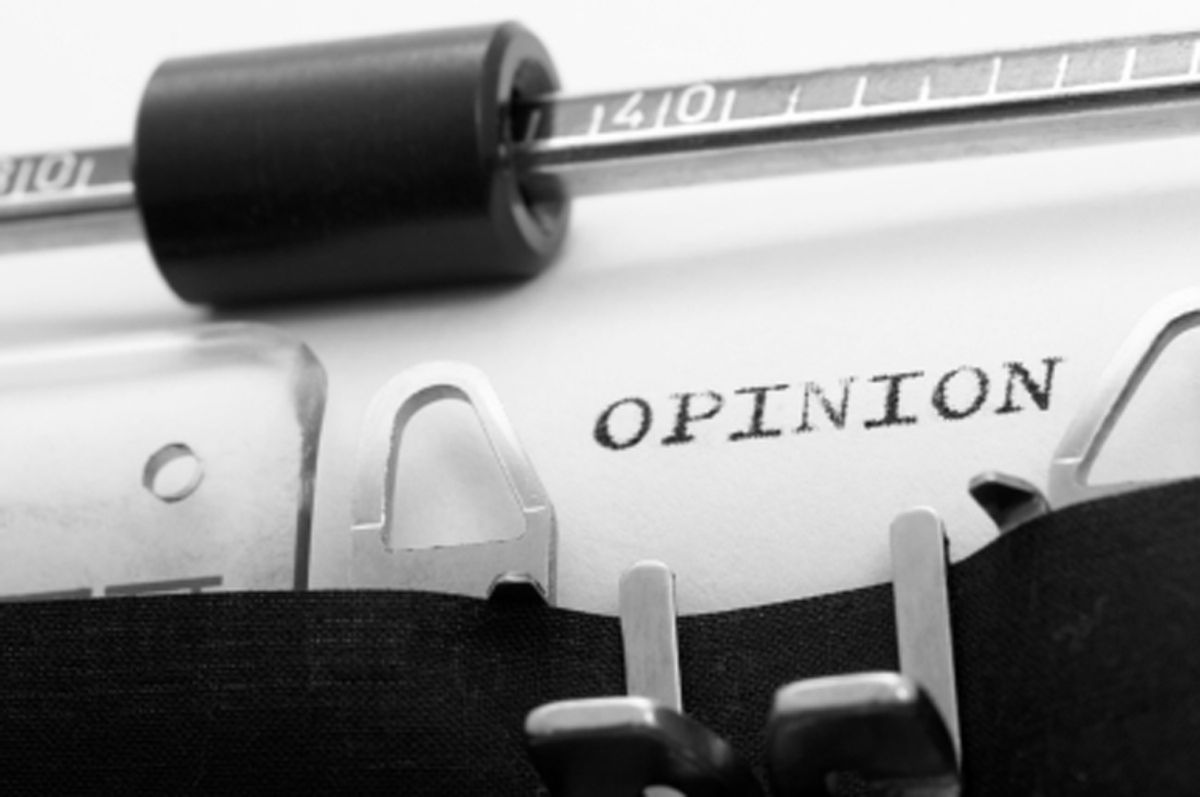 You're probably already sick of Weigelgate (and if you don’t know what that is, here’s a primer from Weigel himself so that you can commence becoming sick of it), but there has been at least one development in this saga that's worth exploring further: the very public rift it has opened in the Washington Post offices.

On one side stand the Post’s ombudsman and the assorted staff writers who've been speaking to Jeffrey Goldberg off the record; on the other, Post reporter-bloggers Ezra Klein and Greg Sargent. One side dismisses bloggers like Weigel, Klein and Sargent as partisan hacks; the other responds that their openness about their beliefs confirms, rather than compromises, their integrity as journalists.

It’s not hard to see the implications of this argument for journalism in general. Weigelgate has instigated a long-overdue fight within the bowels of a major newspaper over the relative merits of traditional, self-consciously impartial reporting and opinionated coverage. It’s an old skirmish, but not one that has ever been fought with this level of intensity, before such a wide audience. And perhaps now that it’s out in the open, we can expose the misguided, antiquated ideology its supporters have dubbed "objective journalism" for what it really is.

Because, make no mistake, it is an ideology -- one predicated on the notion that human beings can educate one another on complex, hotly contested issues without using any sort of subjective or ideology-based language or ordering principle. Maybe this isn’t an unreasonable argument to make a priori, but by now, experience should have taught us that the opposite is true. Human language is too complex, too subjective, and too ambiguous to express non-mathematical propositions in wholly mathematical, objective terms. Human perception is too impressionable and susceptible to self-editing for it to capture, much less perfectly reproduce, a completely unslanted cluster of objective facts. And when journalists behave as if these things are untrue, it distorts their coverage in curious, frequently unacknowledged ways.

In fact, I wrote about one of those ways last week, in a column about the national media's insistence on framing the Gulf oil spill as a campaign narrative. This needlessly constricts a reporter’s critical assessment skills, forcing her to instead use recycled campaign narratives as a crutch. These campaign narratives are themselves ideological, in that they privilege the interests of the political elite (public image, electoral advantage) over the often far more urgent interests of the public (in this case, an economically and environmentally blighted Gulf Coast). In choosing who to cater to, the reporter must make a subjective, values-based decision; her professional code of conduct then requires that she mask these values as simple empirical reasoning.

The problem with an ideology that pretends to be simple fact is that its very nature mires frank, productive exchanges about values in digressive meta-arguments over whether or not those values are, in fact, values at all. Worse, it forces the reporter into a state of unreflective complacency. Intellectual honesty regarding our own beliefs and values demands perpetual self-scrutiny and interrogation in a way that simple factual propositions like “I am reading this on a computer,” or “2 + 2 = 5” obviously do not. When reporters confuse the two, it allows absurd beliefs to fester and grow malignant.

The solution is to follow the example set by Weigel, Klein, Sargent and countless others: acknowledge your own biases. Disclose them to your audience. Never shy away from advancing an argument that is open to contradictory interpretation, but be prepared to defend it and, when necessary, admit error and adjust your beliefs accordingly. But never relinquish a reporter’s skepticism, and never accept anything anyone says uncritically. Never accept anything you say uncritically.

In the interest of following my own advice, I should confess that this argument is a little self-serving. I am an admirer of all three of the bloggers cited in the previous paragraph, and to some extent their success has served as a model for my own career ambitions. And when I write, I don’t want to have to subordinate my own voice and thought processes to a set of arbitrary, restrictive guidelines. How am I supposed to develop as a writer, or deepen my understanding of a subject, when institutional pressures force me to pretend I don’t hold opinions?

That leads me to the most mystifying question in this whole debacle: Why would Goldberg’s sources so vehemently defend a system that stunts their growth? Sadly, I think it is likely for the same reason that they chose to defend this system anonymously: Once your most closely held values are publicly disclosed, you are expected to be able to defend those as well. And so what these anonymous attack dogs likely saw as a valiant stand for good old-fashioned journalism turns out to be an act of cowardice.