The dog that wants to be a gyro

What happens when the hot dog meets the diner? A garlicky, Greek-inspired hot dog is born 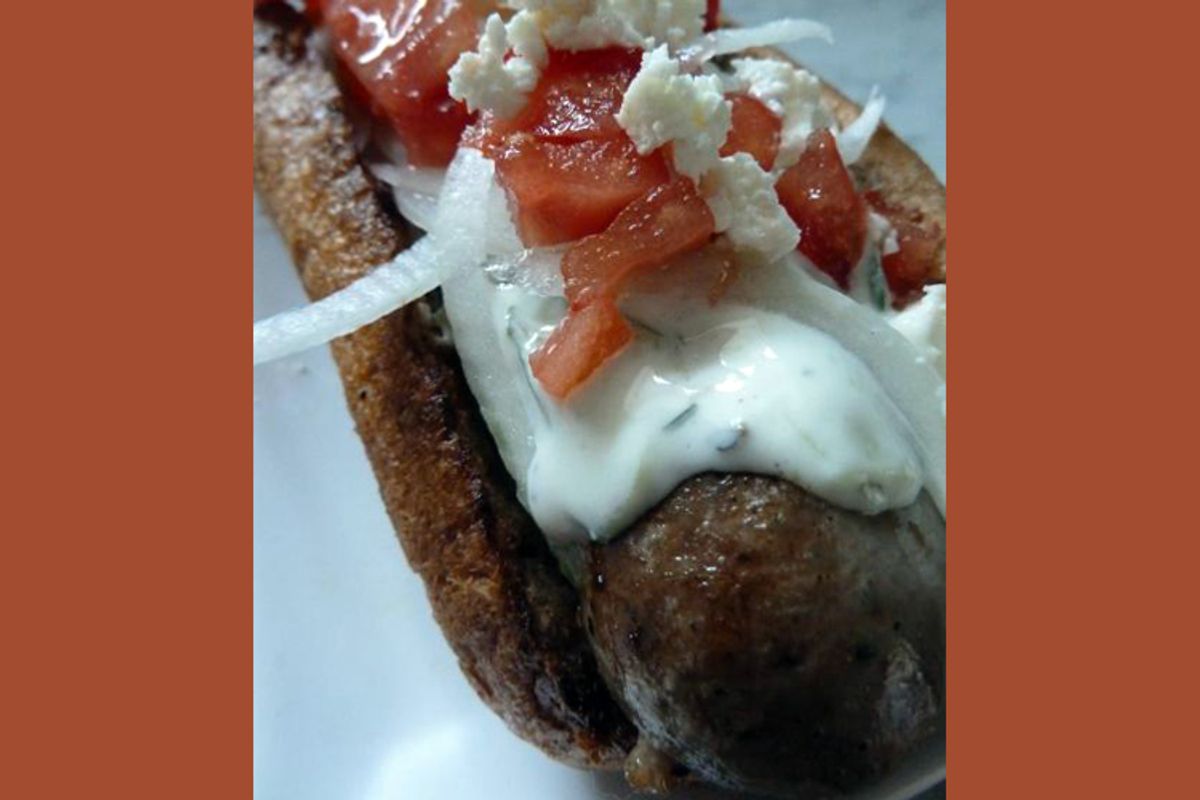 Hot dogs are as all-American as you can get. They conjure up images of 4th of July barbecues, camping (though I've never actually had one roasted on a twig over a campfire), and street vendors selling them from carts under blue and yellow umbrellas on city sidewalks.

Another all-American culinary institution is the diner. Having grown up on Long Island, I am familiar with the form. There is a diner at the center of every town, and it's where families gather for birthdays, graduations or just as a weekly ritual. Nothing fancy, but rather the reassurance of the familiar: laminated menus listing items ranging from breakfast to steaks, a shiny chrome exterior and an interior outfitted with vinyl booths and formica tabletops, bright overhead lights and a tall glass case displaying desserts. Besides the comforting unfussiness of diners, an added bonus is that many of them are open into the wee hours of the morning, or even around the clock.

Diners trace their roots as far back as the late 19th century, when they took the form of horse-drawn wagons. The first recorded diner, in 1872, served hot food to the employees of the Providence Journal in Rhode Island. But the institution of the diner also owes a lot to America's Greek immigrants, particularly on the East Coast. According to historians, Greek immigrants developed the modern diner from the kaffenion, traditionally a hole-in-the wall where men gather to talk over coffee and shots of ouzo. When 350,000 Greeks immigrated to the United States between 1900 and 1920, they brought this tradition with them, and it evolved over time to what we consider the all-American diner today. Just as our population has grown more and more diverse, these days, many Greek diners are changing ownership into the hands of newer immigrants from Asia and Latin America.

The hot dog and the diner have more in common than simply their places in the American appetite. Their connection is Coney Island. I am not referring to that part of New York known for its boardwalk and Nathan's hot dogs, but instead to the specific type of diner popular in Michigan where the "Coney Island" hot dog was created. In other parts of the country, this is known as a chili dog. It's also called a hot dog with "Greek Sauce," in recognition of its immigrant creators. Besides the Coney Island hot dog, the other popular menu item at Coney Island restaurants is the gyro, the Greek pita-wrapped sandwich of shaved lamb combined with tzatziki, tomatoes and onions. That's my kind of sandwich: savory, garlicky and tangy.

To mingle these two parts of the American culinary landscape -- the hot dog and the diner -- I have envisioned a Greek Hot Dog. I am not reinventing the Coney Island/chili dog, which is already well-known and much-loved. Instead, I am bringing to this 4th of July barbecue a hot dog with the flavors of the gyro. It combines spiced lamb sausages and tzatziki, and is garnished with sliced onion, tomato and crumbled feta.

As they say in Greece, Opa!