This action-packed third installment is more vampire movie and less languid romance. Is that what Twihards want? 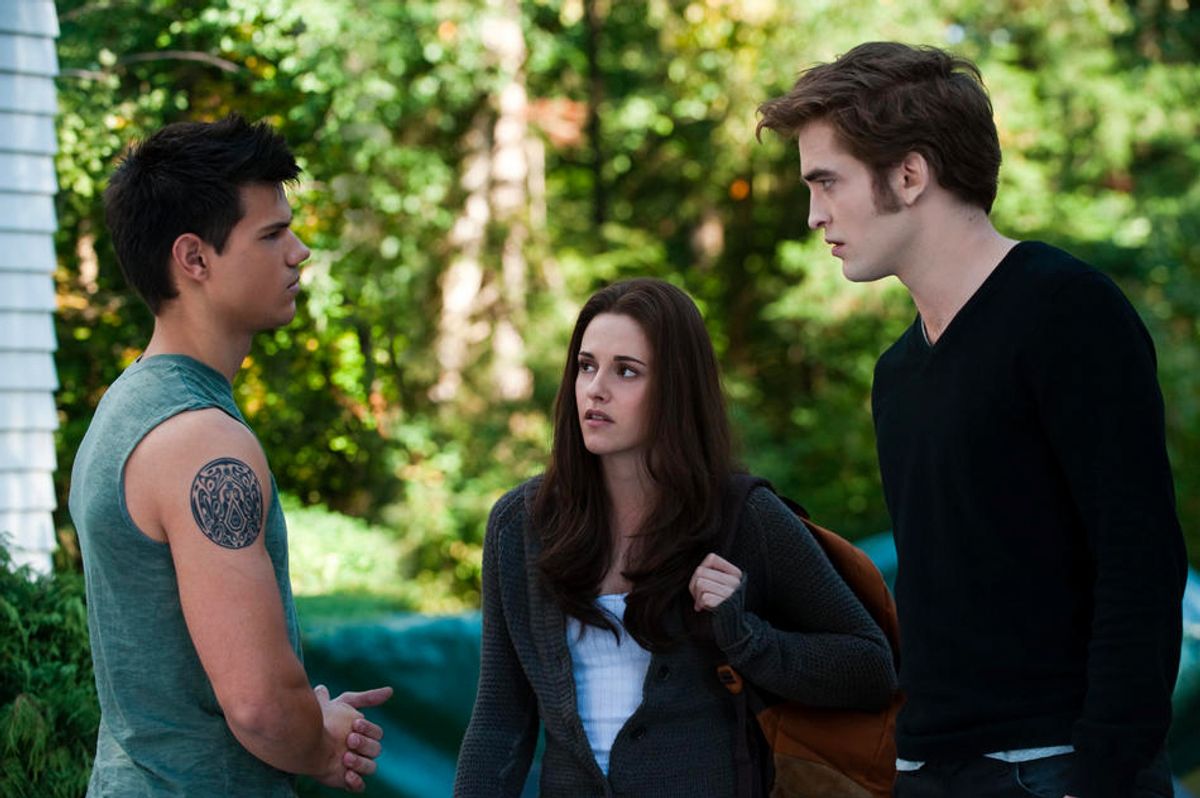 Amid the impenetrable forest of marketing and fan culture that comprises the "Twilight" universe, ranging from official merchandise to pornographic knockoffs, it's gotten a little difficult to tell what role the actual stories play. Are Stephenie Meyer's quartet of novels, and their even more ultra-popular Hollywood adaptations -- now reaching the third of what will reportedly be five movies -- just a mangy little poodle being wagged by an enormous tail?

OK, the release of "The Twilight Saga: Eclipse," an action-packed middle chapter supervised by little-known English director David Slade ("30 Days of Night") is a necessary hook, as we used to say in the news business, to which the series' fans can attach their lustful ravings. But does it matter whether the movie is good or bad? Or is it sufficient for Keds-wearing, faintly tomboyish Bella Swan (Kristen Stewart), disaffected high school doyenne of Forks, Wash., to be permanently, swooningly suspended between her two competing versions of Elvis? In case you actually need some elaboration, I refer to the fey, courtly and slightly feminine Elvis in the guise of undead Edward (Robert Pattinson) and the manly, muscular, swaggering Elvis in the guise of American Indian werewolf Jacob (Taylor Lautner).

On the evidence of the previous film in the series, "New Moon," which grossed more than $700 million worldwide despite having less action and suspense than your average Hungarian art film about two guys, a wheelbarrow and a broken-down coal furnace, it definitely doesn't matter much. As a cynical-minded female friend recently suggested, nobody ever went broke trying to convince girls and women that somewhere out there are gorgeous guys who believe in monogamy, fidelity and chastity, and who will love them forever (literally, in Edward's case), despite a veritable mountain of countervailing evidence.

Now, it's a relief to report that "Eclipse," at least to this Twiloutsider's eyes, is a vastly better movie as well as a more familiar and recognizable one. It's a geek-friendly genre flick, with plenty of CGI effects and fight sequences, along with extended detours into the back stories of rural Washington's undead and shape-shifter populations, and the tense relationship between them. Melissa Rosenberg's screenplay even has a few flashes of comedy, and develops an emotional power that goes far beyond the depressive, lovesick languor of "New Moon." Rival swains Edward and Jacob not only must forge an uneasy alliance to save Bella from hostile vampire marauders, they also become curiously intimate during a long night spent together with her in an isolated, snowbound tent.

Not that there ain't plenty of denial going on here, mind you. Bella is arguably a bit less passive in "Eclipse," but she still can't get anything she wants. Edward still won't "change" her (i.e., turn her into a vampire), or at least not yet, nor will he take her virginity before they're married. "I come from another era," Pattinson murmurs out of those wild-cherry lips in that cream-cheese-frosting face, dropping to one knee to tell her how their courtship would have gone, back in the quasi-mythical past, when he would have taken her on chaperoned strolls, stolen a few kisses, gone into her father's study to ask for her hand. (Vampires always seem to come from the gentlemanly class of yore; you just don't see fat, beer-soaked, illiterate 19th-century laborers turned undead.)

Stewart continues to battle her role to a draw, lending an air of contemporary, exasperated girlness to one of the most featureless female characters in fictional history. But "Eclipse" is less Bella's movie than Edward's -- Pattinson's performance here is delicate, restrained and specific, and he never resorts to the cliché-Yank accent of so many British actors -- and for that matter less Edward's than Jacob's. Whether the shift is strategic or just the result of Lautner's aging process -- the actor is no longer jailbait, ladies! -- Jacob finally has a little 'tude and sexual swagger to go with his newfound wolfiness.

In "New Moon" Lautner struck me as almost cartoonishly young, with a hint of baby fat in his cheeks and impressive pectorals. Now he has a leaner, crueler look, and when he tells Bella -- after making a move and being rebuffed -- that he'll never kiss her again unless she asks him to, I wanted to give him a high-five and a friendly nudge in the ribs. Way to crush all resistance, dude! As smooth as that maneuver is, Jacob's killer argument that he's Bella's only prospective lover who is actually still alive still doesn't make much headway with her.

We learn a lot more about Jacob's ridiculously wholesome Indian tribe in "Eclipse" -- they look more like an '80s boy band fresh from a Wheaties photo shoot than like representatives of our continent's most marginalized people -- and also more about the pre-vampire lives of Edward's clan, especially one-time Confederate officer Jasper (Jackson Rathbone) and Rosalie (Nikki Reed), former belle of Rochester, N.Y. I can't say that Slade or his actors seem all that comfortable with these picture-book historical flashbacks, but "Eclipse" does a reasonably good job of introducing the moral-theological armature always necessary to vampire yarns. The purpose of stories about how unhappy immortal beings are, one might argue, is to help reconcile us to the fact that we are unlikely to join them.

If "New Moon" had no story to speak of, "Eclipse" almost has too much. It's a much better problem to have. Inside all this grandiose narrative superstructure lies the story of Edward's final confrontation with the beautiful-but-evil undead redhead Victoria (Bryce Dallas Howard), who may be behind the rise of a gang of undisciplined, ultraviolent vampire "newborns" in nearby Seattle. This produces a lively array of fight sequences, first between Edward's Cullen clan and Jacob's shape-shifting werewolf-Indians, and then between their emergency alliance and the vicious interlopers. (Newborn vampires are more vicious and dangerous because "some of their human blood still flows through their tissues." Eww, gross! But kind of cool!)

Where "New Moon" director Chris Weitz seemed utterly out of his depth with the vampires vs. werewolves action element -- dawww, look at the puppy! Look at the puppy! -- Slade delivers a highly competent genre movie, much less treacly and dreary than Meyer's books and by far the most entertaining of the series to date. (What Bill Condon, the director of "Dreamgirls" and "Gods and Monsters," will bring to the fourth and fifth installments remains a fascinating unknown.) If that's a highly conditional verdict -- and it sure is -- that still makes "Eclipse" one of the better multiplex options of this legendarily dismal summer. Oh, and me personally? While I'm more the pallid, indoor, frock-coat type by personality, relationships demand contrast. Bella belongs with the rugged, shirtless, outdoor Elvis. Team Jacob, all the way.