This just in: Elena Kagan is funny

The media comes to a shocking realization: The Supreme Court nominee is both humorous and a lady -- imagine that 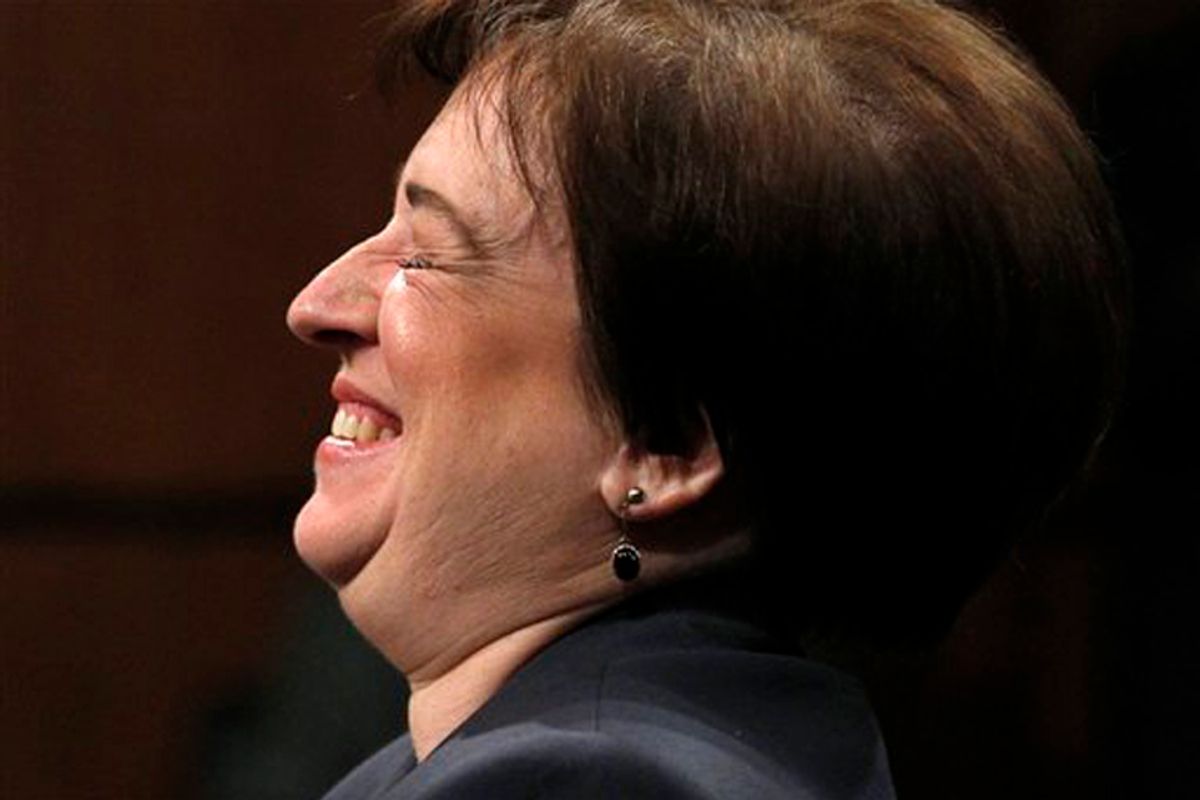 Several news outlets have posted highlight reels of Elena Kagan joshing with senators left and right. Even the staid Christian Science Monitor joined the fray by discussing how the Supreme Court nominee was "drawing giggles, laughs and even some outright guffaws." Four paragraphs in, they feel confident in delivering a pronouncement: "Kagan is funny."

This is newsworthy? Cue reference to that infamous Christopher Hitchens essay in Vanity Fair, in which he started from the premise that women weren't funny, or simply not as funny as men, and proceeded to pretend to investigate why. (His answer? Men don't get laid if they can't make a lady laugh, but all ladies have to do to attract similar attentions is stand there. Boffo for them.)

The subtext of all "Women: Funny? Discuss" pieces seems to be that women can trade on their sensuality or their humor but not both. Should we pile on with a list? Paula Poundstone, Ellen DeGeneres, Fran Lebowitz, Nora Ephron -- the criteria for a career in comedy used to be that you not be conventionally attractive in the eyes of conventional men.

And this subtext is certainly apparent in the media coverage of Kagan so far, veering as it has from is-she-or-isn't-she speculation about her sexual orientation to more general nimrod partisan head-scratching about why she and other prominent females in the Obama administration weren't, you know, a little cuter.

Both those memes now exhausted, this new take on Kagan seems almost to have inspired relief among those who found her haircut, her careerism, and her life choices mystifying. It's as if the collective media brain slapped a collective hand to forehead in delayed recognition. Oh, I get it now! Kagan's the funny fat chick! Cool!

Though attitudes are slowly changing, Tina Fey herself must be bored with reading profiles that wink wink nudge nudge over how she's surprisingly do-able for a smart, funny lady. (I'm bored just typing that sentence.) For reasons that elude me, American culture loves throwing out these binary options and then feigning -- or is it real? -- surprise when the world proves three-dimensional. That we're still having this conversation speaks to the genius of the Bechdel Test for Women in Movies. People fed a steady pop culture diet are not accustomed to images of well-rounded women -- let alone women who don't fret much over men, Oscar gowns, low-fat yogurt, yoga mats, babies or Sephora.

But I don't think we'll ever get past it. Hitchens likened a woman laughing to a woman about to climax ("I am talking about that real, out-loud, head-back, mouth-open-to-expose-the-full-horseshoe-of-lovely-teeth, involuntary, full, and deep-throated mirth; the kind that is accompanied by a shocked surprise and a slight (no, make that a loud) peal of delight.") Well, sure. But then there's also cover-your-mouth-and-point laughter, which most men typically don't enjoy eliciting.

If men continue to find women's humor novel or noteworthy, one suspects it's because they still worry that the laughter might be directed at them. Which is perhaps the subtext's subtext here. The power to ridicule is no small thing.

Megan Hustad is the author of How to Be Useful: A Beginner's Guide to Not Hating Work," published by Houghton Mifflin.