Lindsey Graham is not going out with Ricky Martin 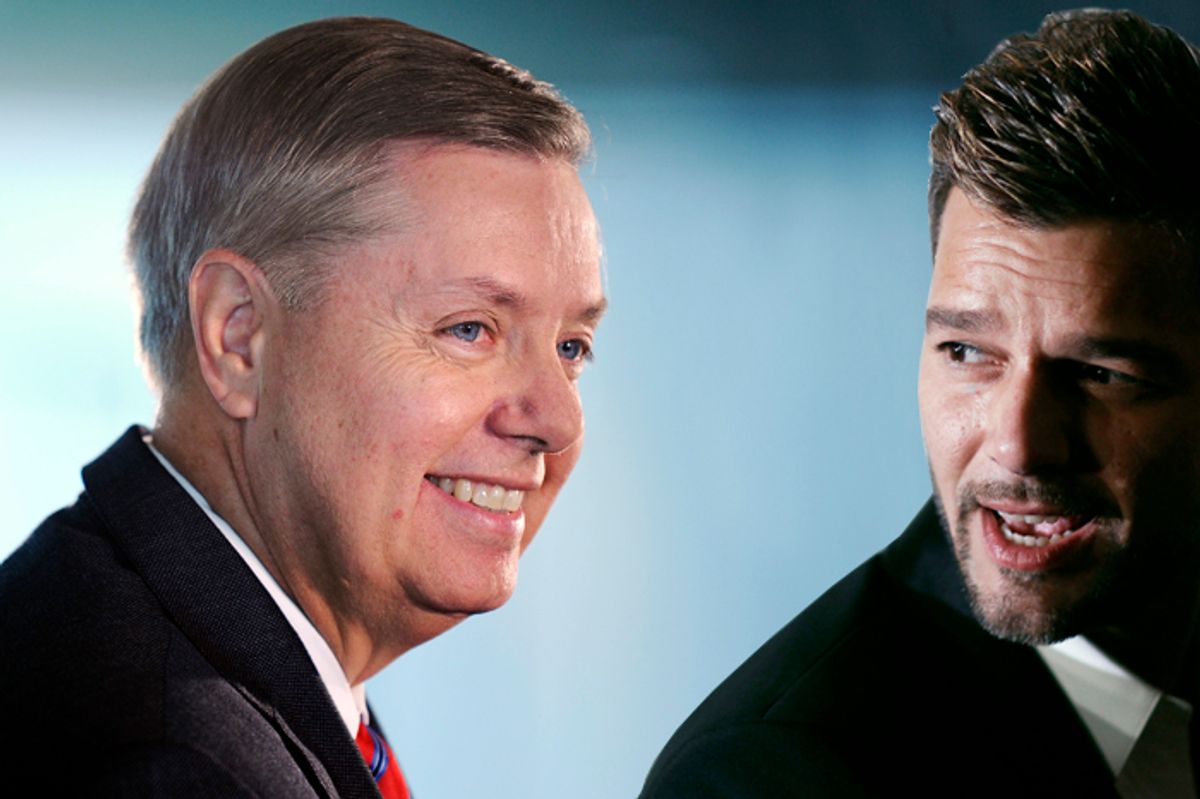 US Senator Lindsey Graham (R-SC) smiles during an interview at the Newseum in Washington, October 1, 2009. The interview is part of the first day of the First Draft of History event, held by the Atlantic Magazine and the Aspen Institute to bring together newsmakers, historians and journalists. REUTERS/Jonathan Ernst (UNITED STATES POLITICS) (Â© Jonathan Ernst / Reuters)
--

Lindsey Graham isn't gay. Just FYI. He has said so, himself, to the New York Times:

During a South Carolina Tea Party rally this spring, one speaker created an uproar by postulating that Graham supported a guest-worker program out of fear that the Democrats might otherwise expose his homosexuality. (Graham smirked when I brought this up. “Like maybe I’m having a clandestine affair with Ricky Martin,” he said. “I know it’s really gonna upset a lot of gay men — I’m sure hundreds of ’em are gonna be jumping off the Golden Gate Bridge — but I ain’t available. I ain’t gay. Sorry.”)

So that's that! Stop insinuating that the never-married 54-year-old senator is having an affair with the recording artist who pretended to be straight for years, for the sake of his career.

Other gems from the New York Times Magazine profile of Graham: he is obsessed with polling, all Republicans hate him for not thinking the President is a socialist Muslim, and while he seems to regret John McCain's right-ward lurch, he is relishing the attention that comes from being The Official Reasonable Republican of the United States Senate. Do you know how many times he has been to the White House? He seems to talk to Rahm Emanuel hourly!

“The president has said very nice things about me off the record to other reporters,” Graham recently told me, and a senior administration official confirmed that the White House places particularly high value on Graham.

And yet... he has not helped the White House pass any legislation.

Lindsey Graham has never delivered GOP votes on anything. And he never will, because no one in the Republican caucus has any respect for him. He cannot even deliver the vote of his best friend, John McCain.

He will not do anything to get immigration reform or energy legislation passed, this Congress or the next. And he actually seems to understand this! Which makes him smarter than Barack Obama and Rahm Emanuel.

The other fun thing we we learn about Lindsey Graham is that "it is widely believed by those close to him that he is incapable of manipulating a coffee machine, an oven, a toaster or a can opener." (We don't learn anything about how he kept lying about fighting in the Gulf War.)

So, to sum up, there are three common myths about Lindsey Graham: that he's gay, that he's a Gulf War veteran, and that he's a useful White House ally. None of them are true!