This week's Taliban attack on a NATO airfield underscored an ugly dilemma for the newly confirmed U.S. commander 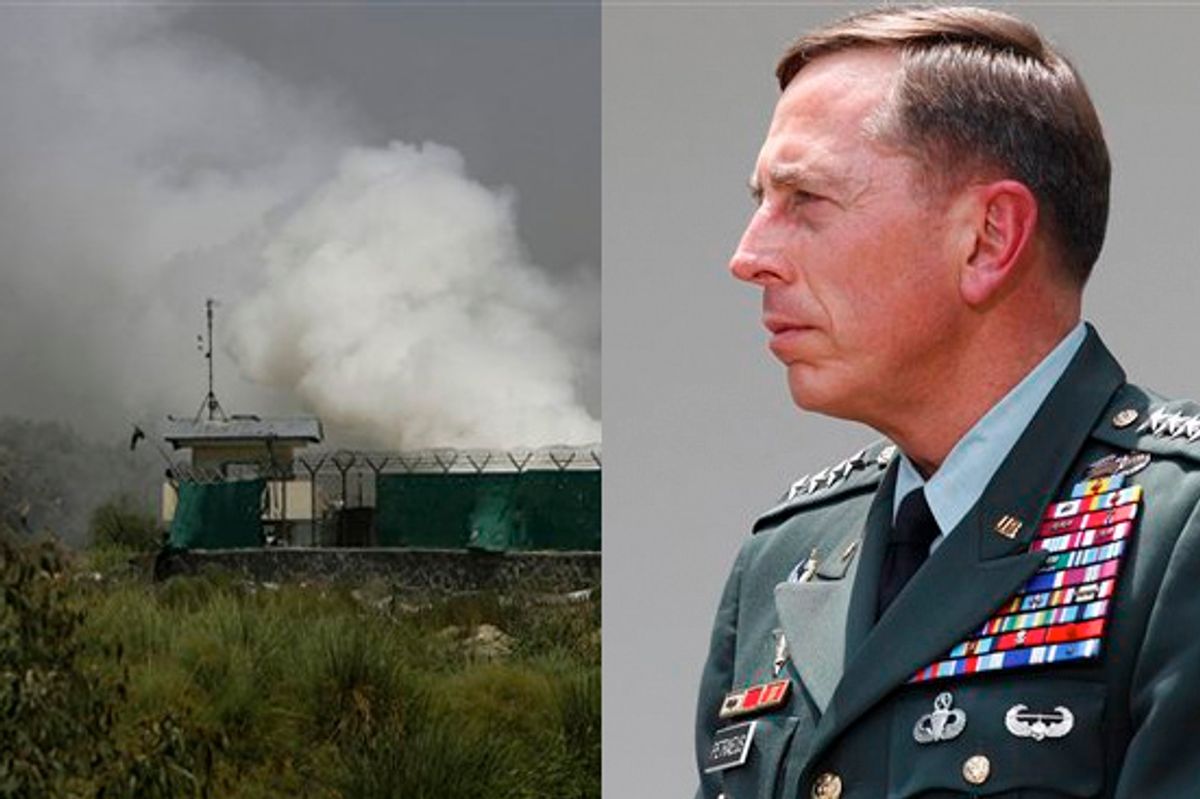 Smoke rises outside an airfield used by Afghan and international forces in Jalalabad, east of Kabul, Afghanistan, Wednesday, June 30, 2010. Militants set off a car bomb and stormed the entrance to the airport and eight insurgents died in the ensuing gunbattle, authorities said. (AP Photo) (AP)
--

The Taliban wants David Petraeus to know it can strike at will. On Wednesday, in an attempt to send a message to the soon-to-be head of U.S. and NATO operations in Afghanistan, Taliban fighters attacked a NATO base in Jalalabad.

Al-Jazeera reports that a suicide bomber detonated a car outside of the compound’s gate, near its airfield, while a number of other Taliban gunmen assaulted the base with AK-47 and RPG fire. There are conflicting reports as to whether the insurgents managed to breach the perimeter of the base. According to NATO’s International Security Assistance Force (ISAF), eight Taliban fighters died in the skirmish.

The attack, which was similar to one carried out on the Bagram airfield on May 19 and another launched three days later at the Kandahar airfield in southern Afghanistan, raises significant questions about the environment U.S. and NATO forces face. In the words of an ISAF spokesperson, "Violence [in Afghanistan] is really at an all-time high." June, with its 60 U.S. casualties, has been the deadliest month of fighting since the war began nearly a decade ago.

While these numbers continue to rise, a high-level review of the rules that constrain U.S. and NATO forces within Afghanistan appears to be forthcoming. In his Senate confirmation hearing Tuesday, Petraeus promised to "look very hard" at the rules of engagement set out by his predecessor, Gen. Stanley McChrystal, and said that it was a "moral imperative" to grant troops "all the support they need when they are in a tough situation." However, he also made a distinction between McChrystal’s rules and strategic direction and their current implementation; the former he supported and the latter he took issue with suggesting that some units have been overly "bureaucratic" in their implementation.

Petraeus appears to be making an attempt to assuage the very real concerns of some of his troops, who feel that the rules they are expected to abide by -- rules the people shooting at them are not subject to-- are unnecessarily putting them in harm’s way. But, Petraeus also has to appear to stay the course in terms of counterinsurgency (COIN) fundamentals, such as making extensive efforts not to kill innocent people. The tricky part is that the main argument against McChrystal’s rules of engagement is not that they are too bureaucratic; it's that they are overreaching and potentially dangerous.

Petreaus really can't have it both ways on this issue. If he actually responds to the demands of so many of his troops on the ground and relaxes the rules of engagement -- something he seems hesitant to do -- then U.S. forces run the risk of killing more Afghan civilians and, in turn, providing rhetorical fodder that the Taliban and al-Qaida would certainly use for recruitment. But if he chooses the "less bureaucratic" version of McChrystal’s COIN approach, June's status as the deadliest month in the history of the Afghanistan war probably won't last for long.