How food gets assigned a gender 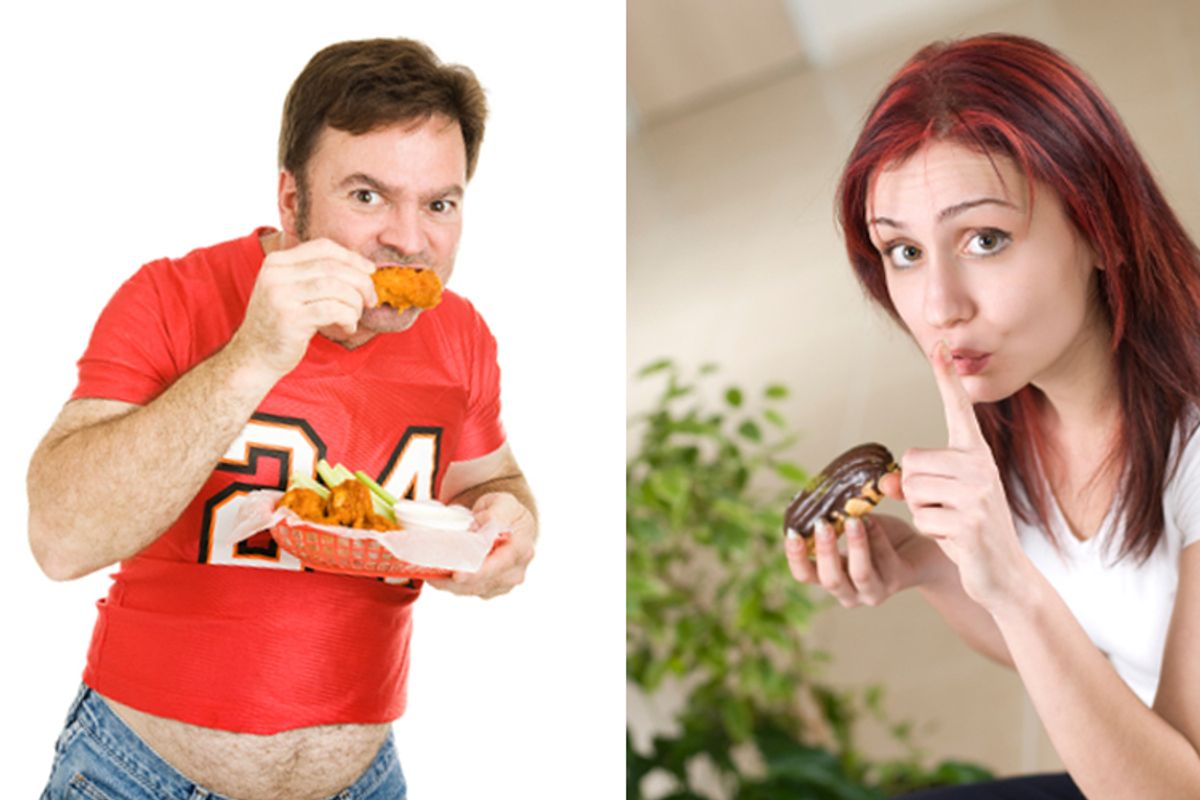 Bros may have stopped icing bros, but we’ve yet to see the last of the sexist idea behind the game — that a man can be humiliated by being forced to chug a drink associated with girls. Girls soon started Busching girls, replacing the bottle of Smirnoff Ice with cans of Busch beer. This time, the idea was to embarrass women by making them drink bottles of a vile brew otherwise seen in the hands of manly men.

So what is it with certain foods (and drinks) getting the boys vs. girls treatment? There may be a few male stars — like Joaquin Phoenix and Tobey Maguire — who are vegetarians, and women may be joining the ranks of bloody-aproned butchers, but in the American consciousness, real men still don't eat quiche and women stick with chocolate, tofu and yogurt. This could easily be the handiwork of the evil geniuses on Madison Avenue, but might these clichés also arise from some long-buried grain of truth? Are genetic differences responsible for our gendered eating? How many of our eating patterns come from gender socialization, and how many are hereditary? And why is it that food rarely seems to be categorized this way outside the U.S.?

Marcia Pelchat is a sensory psychologist specializing in food and beverage selection at the Monell Chemical Senses Center. Women, she said, are genetically predisposed to prefer sweeter tastes, with greater sensitivity to bitterness. As a result, cocktails and alcoholic drinks aimed at women tend to be sweet — as an attempt to mask the burn — and colorful (because, you know, pink will make anything more palatable). Drinks for men, on the other hand, tend to let the bitterness take the fore: "Men who drink hoppy drinks don't just not notice the bitter taste, they actually like it," Pelchat said.

Others, like Yale University’s David Katz, said some of our gender-driven eating can be explained by evolution. Men, as hunters, see meat as a reward and also need more protein than woman in order to build muscle mass. "Men and women have differences in physiology which might have to do with access to different kinds of food," said Katz, who is the director of Yale’s Prevention Research Center. That is, the different caloric requirements of men and women may be because we had differing access to foods as cavemen and cavewomen. We’re only continuing along those patterns today.

Another factor, Katz said, is the different hormonal composition of men and women. Women's craving of certain foods during pregnancy, and, in some cases, before their periods, might also explain why they prefer to eat different foods throughout the year.

One of the foods that’s classically gendered — and adheres to both Pelchat’s theory of the feminine sweet tooth and Katz’s explanation of hormone-related food cravings — is chocolate. In the American imagination, in particular, a craving for chocolate has always been the exclusive preserve of premenstrual women and post-breakup slumber parties. (Really, how many times have you heard a man say he's dying for a box of Kisses?) A 1999 study by Debra Zellner, a psychologist at Montclair University, found that 50 percent of American women craved chocolate, while only 20 percent of men reported doing so.

But beyond the borders of the United States, the story is different. The same study found that in Spain, men and women craved chocolate equally — about 25 percent, while in Egypt, neither sex craved chocolate, with both sexes showing a high preference for salty foods.

Elsewhere in the world, studies have found that instead of girls, it is boys who like candy and sweets. Lucy Cooke, a researcher at the University College in London found that school-age British boys showed a clear preference for sugary and fatty foods, meats, and eggs, while girls were more willing to eat fruits and vegetables.

And when I took my work home, I realized that my husband and I — both of us grew up in India — have eating habits that fly in the face of all these studies. My husband has an insatiable sweet tooth, can't go to bed without his nightly Mars bar, and diligently spends hours in the fruit aisle. I, on the other hand, am a complete dairy fiend, love my protein, adore a good whisky, and wouldn't notice if Ben & Jerry's stopped producing Cherry Garcia tomorrow (my husband would react with some emotion). And when I tried to think of differences in eating habits between men and women in India, I was unable to come up with anything conclusive — for every woman who likes chocolate, there's a man who likes it too, and for every man who is rabidly carnivorous, there's a woman who can out-meat him.

As I thought more about global dietary practices, it occurred to me that the U.S. has perhaps one of the more gender-segregated eating cultures in the world. (Can you imagine a French woman saying she stays away from red meat or a French man saying that chocolate is chick food?)

So while it seems possible that some food preferences could be put down to gender, it's obvious that American culture has a way of exacerbating them.

Brian Wansink is the director of Cornell University's Food and Brand Lab, the author of Mindless Eating: Why We Eat More Than We Think, and all-around food psychology genius. People, he said, are more likely to eat a food when they associate with it qualities they'd like to see in themselves. So a man who wants to be strong and masculine is more likely to eat a food described as strong and masculine — hence the prevalence in American culture of meat as a manly food. Besides, he said, America has some of the most psychographically segmented advertising in the world — all messages that the food we eat is subconsciously saying something about us. "The reason we can view food as a commercial product is because we've never had a major starvation or a food shortage. We've always had an abundance of food," he said. In India, it occurred to me, food was sacred, an elemental life force that provided sustenance, a resource we rarely took for granted. In the U.S., instead, it was an extension of one's identity, a phenomenon made possible by the United States' unique history of unrivaled luxury.

Despite the current obesity epidemic, American women, and specifically rich American women, tend to be very weight conscious — yet another factor that affects eating choices across genders. The same calorie consciousness is not societally required of men, said Paul Rozin, a psychology professor at the University of Pennsylvania.

But might things be changing? After all, women are charting brave new culinary landscapes — they're brewing beer and drinking it in larger quantities than ever before, and meat, say many women, is the new black. Rozin didn't seem to think so. The family meal, he said, is important in terms of men and women eating the same food. "And as the family continues to splinter, or as people continue to eat out more often, men and women will order different foods." But ever the optimist, I'll continue to wish for advertisements that see me as belly first and boobs later.