9.5% unemployment and the Reagan-Obama parallel

The jobless rate was exactly the same at this point in Reagan's presidency. But will the comparison hold up? 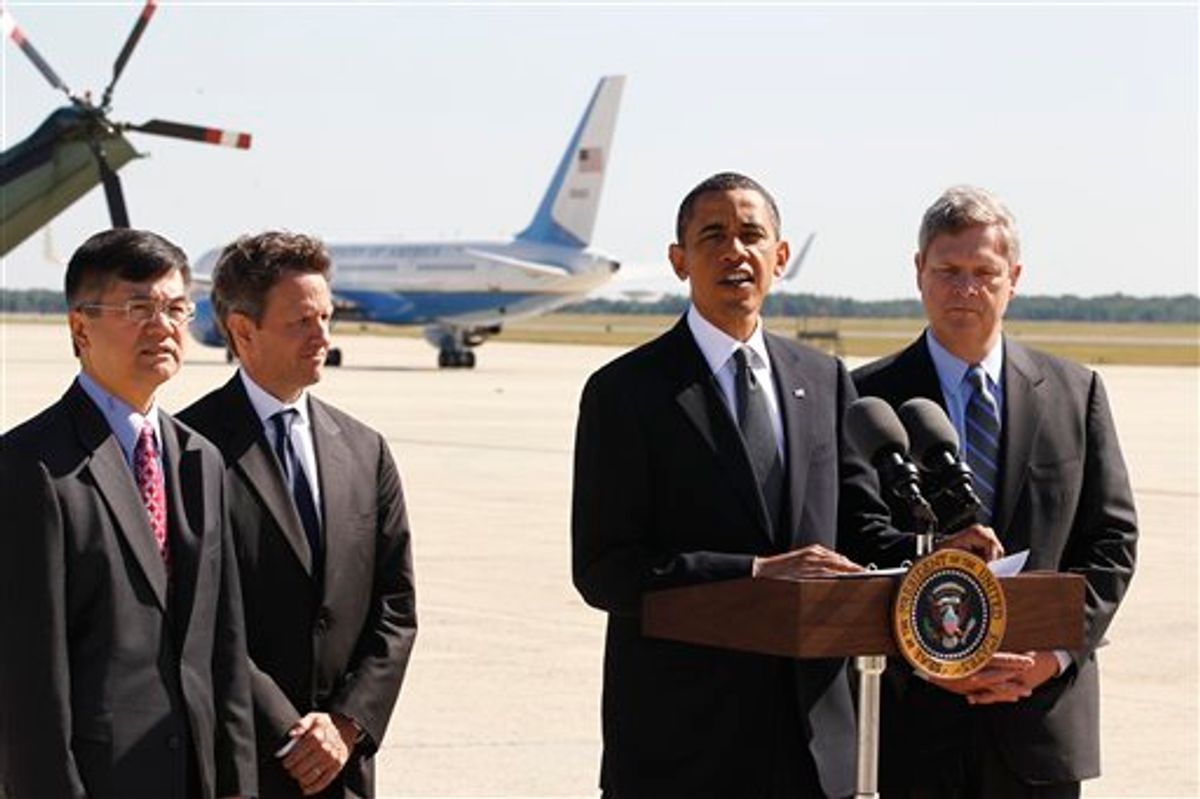 As you may know, I am fond of drawing parallels between Barack Obama's presidency and Ronald Reagan's. The basic nature of their appeal is similar (even if they appeal to wildly different segments of the electorate), they both began as candidates of their party's bases, and they both came to office under similarly dire economic circumstances --and with the same immense expectations.

This is why I haven't been too alarmed by the rough poll numbers that Obama and the Democrats are now facing. The example of Reagan -- the last president to face double-digit joblessness -- showed that this kind of second-year struggle was essentially inevitable (as are the potentially significant losses Democrats face in this November's midterms).

The real question for Obama, then, is whether the economy will rebound in the third and fourth years of his presidency, as it did during Reagan's. A measurable drop in the unemployment rate in 2011 and 2012 would revive American confidence and rally most swing voters back to Obama. Obama, like Reagan, is someone who most Americans instinctively like and want to support. Good economic news will let them go with their instincts.

With that in mind, there is -- on the surface -- encouraging news for Obama in the June unemployment data released this morning: At 9.5 percent (a slight drop from May), the jobless rate is almost exactly where it was at this point in Reagan's first term. (The June 1982 rate was 9.6 percent). Moreover, the growth in unemployment over the first 18 months of Obama's presidency is essentially the same as it was during Reagan's. When Obama took office, the jobless rate was 7.6 percent; for Reagan, it was 7.5%. This, more than anything else, explains why Obama's political position in the summer of 2010 is so similar to what Reagan's was in the summer of '82. And it suggests that Obama could still enjoy the dramatic political rebound that marked the second half of Reagan's first term.

Now, the bad news for Obama: At this point in Reagan's presidency, a recession was still raging, and unemployment was still surging. It ended up topping out at 10.8 percent in December '82, then began falling precipitously. By Election Day 1984, it stood at 7.4 percent -- essentially identical to what it had been on Election Day 1980, but such a marked drop from its '82 peak that voters rewarded the president with a 49-state landslide.

Today, we are told, the actual recession is probably over, and the rapid growth in the unemployment rate actually stopped months ago. For most of 2010, it has held steady in the 9.7 percent range, with no signs of a steep drop on the horizon. Yes, the 9.5 percent figure reported today is the lowest mark in a year, but it's largely be a function of hundreds of thousands of unemployed Americans giving up the job hunt. The Obama administration is touting the creation of some new private sector jobs; they'll need far more of that in the future to match the Reagan recovery.

Paul Krugman has been writing that the effectiveness of the stimulus plan enacted last year has essentially been maxed out -- and that without more public spending soon, high unemployment will last well into the future. If he's right, then my Reagan-Obama parallel will no longer be valid.