Enter a world of fandom and possibility, featuring a gay Edward Cullen, a "Gossip Girl" crossover -- and much more 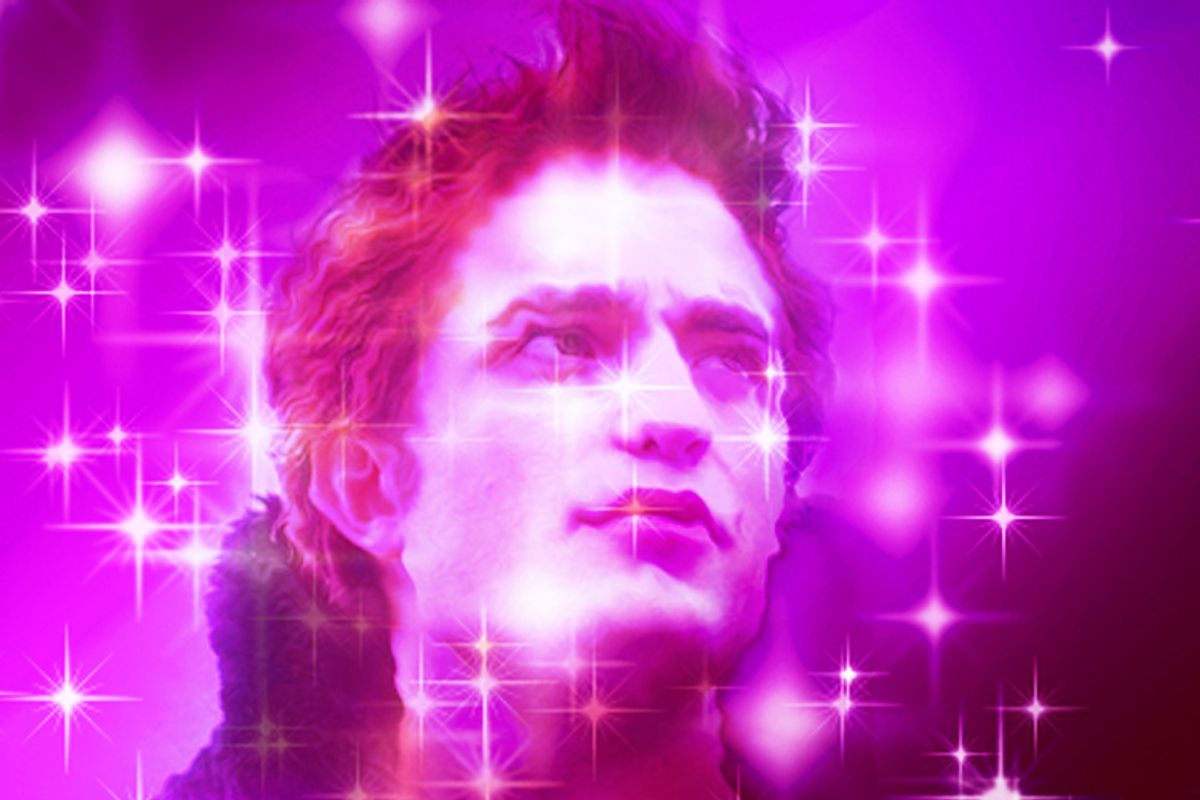 We offer a taxonomy of popular "Twilight" fan fiction below, with excerpts of the most fascinating and raunchy entrants (much of it culled from the fan fic site Twilighted, which requires registration). Be warned: Some of these tales are not for virgin eyes. But they do offer a clue about the enduring mega-success  of "Twilight": These characters inspire the imagination.

It's not surprising to discover that the Bella-Edward love affair is the engine that powers much of its fan fiction, whether the narrative turns them into humans or CEOs of multimillion dollar corporations (though usually the storyteller puts herself in the role of Bella Swan). Whatever the conceit, the smoldering tension remains, resulting in some steamy scenarios. ("The muscles inside the deepest darkest part of me clench?" Yowzah.)

"Do you have any idea how much I want you Bella Swan?" he whispers.

My breath hitches. I cannot take my eyes off his face. He reaches up and gently runs his fingers down my cheek to my chin.

"Do you have any idea what I'm going to do to you?" he adds softly, caressing my chin. The muscles inside the deepest darkest part of me clench in the most delicious fashion. I want to close my eyes ... the pain is so sweet and sharp but I'm hypnotized by his green eyes, staring lustily down at me. He leans down and kisses me. His lips demanding, firm, slow ... molding mine. He starts unbuttoning my blue blouse and slowly he peels it off me. He stands back and stares down at me. I'm in the pale blue lacy perfect-fit bra ... thank heavens ...

-- From "Master of the Universe"

It's doubtful that a franchise created by a Mormon would ever indulge in same-sex love, but nothing can stop such hypotheticals in the world of fan fiction. What if Edward left Bella in the woods and instead made off with Jasper to San Francisco? Things get dirty, to say the least ...

My cock was aching so I undid my jeans and stroked myself as I held Jazz, licking and sucking him. I expect I was clumsy and inexperienced but all I remember is the magic of finally having him in my mouth all hot and hard, just as I'd dreamed. He whimpered then and quivered all over and I took him in as deeply as I could and sucked him and he came in my mouth. He tasted of salt with a slight bitter edge.

I came hard in my hand between his spread legs and then I pulled off my T-shirt and cleaned us up and kissed his belly, doing up his jeans again, and my own. I think I knew he'd need to feel safe as soon as the stoned lust wore off. I slid up beside him, lying in the crook of his armpit, drinking in his musky sweaty smell.

He lay there for a while breathing deeply, eyes shut, then he turned his head and looked at me with those big gray eyes.

"That was fun, but I'm not gay Edward."  Straight to the point, that's my Jazz.

The secondary characters get the limelight

Zeroing in on minor characters is a classic gimmick that has inspired everything from brilliant plays ("Rosencrantz and Guildenstern Are Dead") to long-running sitcoms ("Frasier"). Some Twihards dispense with Edward and Bella's sordid drama altogether, preferring to give voluminous back stories and heroic challenges to the second fiddles...

Lastly, I [Carlisle Cullen] again lifted Esme into my arms and carried her back to the truck. There was no turning back. I had learned a little from changing Edward. I could be more exact, spare her some of the pain. She had lost so much blood, perhaps it wouldn't be three days. I lied to myself, surely with one so on the brink it might be a matter of hours.

I would take her to the cottage. The change could transpire there. Except, I'd have to begin the process here; she'd never be able to endure the ride to the cottage. I laid her in the back of the truck, applied the chloroform, and closed the doors behind us.

I uttered a stifled scream of frustration. This change had to happen more rapidly. I couldn't afford for the venom to work its way through her body slowly with one bite. She'd certainly be dead before the venom fully took its paradoxical effect: taking life as it healed and gave life. It was infuriatingly ironic. Ten minutes ago I was contemplating how I had all the time in the world. Now, time was my enemy.

Forget the anemic one. It's the Wereboy all the way

Bella reached out, took his hand in hers. I'm sorry I hurt you, Jake. I know I made mistakes, bad ones, and I know I could probably apologize for the rest of my life and it wouldn't make up for what I put you through. Just know that I'm here, and I missed you. I really missed you. And I'm sorry. You were my best friend, and I broke your heart. But I've grown up. I'm a different person now.

Jacob pulled his hand free. I've grown up too, Bella. And you're not the only one who is different. He started to walk away, then turned for a brief moment. But I did miss you too.

And then sometimes, there is a story with a riding crop, and the simple act of waxing takes on fascist overtones.

Both of his hands traced across my shoulders, down my arms. One hand slipped between my breasts and dropped to where I was wet and aching.

"This," he said, rubbing my outer lips, "is your responsibility. I want you waxed bare as often as possible. If I decide you have neglected this responsibility, you will be punished."

And again, we had agreed to this.

"In addition, it is your responsibility to ensure your waxer does an acceptable job. I will allow no excuses. Is that understood?"

I didn't say anything.

"You may answer," he said and I heard the smile in his voice.

Meta fan fic, or the love lives of Robert Pattinson and Kristen Stewart

The love lives of R-Patz and K-Stew have spawned their own myth and lore. Who needs OK Magazine to track the celebrity roller coaster lives of the two stars?

Oh, that line is soo good.

I flipped through the final pages of the rewrites with a smile. The script was better this time around. The last time I read it, it had a terrible plot synopsis on the top and some of the lines were way too corny and cheesy. As it is they still have some pretty cheesy lines in it, but I can handle a certain amount of them. Bella has this one line in the meadow where she says, Edward, I'd rather die than stay away from you. The line is very cheesy and stereotypical for a love story, but it's true to the character. I could kind of defend Bella saying something like that. And, in Bella's situation, every time she is near him she risks death; so, for her to say she's rather die is kind of funny considering it has a 50/50 probability rate of happening. It's also ironic in the fact that, in order for Bella to be with Edward forever -- like she wants -- she'd have to become a vampire and die – so her saying she'd die to stay with him is very suiting.

She had been in the City many times before. Working as a fashion model meant traveling all over the world and Rose knew how to work the social scene in about every country she had been to. However, this time she was experiencing New York in a different way. Moving here meant all sort of changes and Rose didn't like it one bit. In Paris, everyone knew who she was. Designers and photographers called her for jobs, not the other way around. Rose was used to being desired and she preferred it that way. Although designers and photographers here would know her name, Rose was painfully aware of the fact that she would have to work hard to land jobs. To top it all off, the high school had informed her that her traveling would not be tolerated as it had been by her Parisian school. Rose sighed, knowing that entailed that she would have to fight even harder to make a name for herself here.

She took another sip of her cocktail, sensing someone approaching her from behind. She couldn't help but roll her eyes, not even bothering to turn around to look at him. She felt his hand on the small of her back and before she could fire a snarky comment at him, he leaned in to speak softly in her ear.

So, are you ready to leave?

Rose turned her head slightly to glare at the guy who had the nerve to talk to her like that. He was an attractive, dark-haired specimen, probably around her own age. He was wearing a dark, plum-colored suit that would have looked ridiculous on anyone else, but somehow he made it work.

What makes you think would I leave with you? Rose asked, giving him the side eye.

Ultimately, it's good to see "Twilight" fans don't always themselves too seriously.

"Please… please tell me this is a joke," Charlie pleaded with the unknown caller. He was very still for a second, then threw the phone across the room. "NOOOOOOOOOO!"  he wailed, ripping his shirt open and falling to his knees.

Billy rolled over to his friend as quick as he could. "Charlie What is it?"

Charlie gazed up at my father, tears glistening in his impressive 'stache. "That was Bella's teacher calling from their field trip in Australia. Apparently, Bella had wandered into the outback away from the group, mumbling something about 'Wuthering Heights,' and was attacked by a pack of dingoes. They tore her to pieces and ate her," Charlie choked out.

"NOOOOOOOOOOO!"  I cried as I tore my shirt open and fell to the ground.