What ever happened to "You're welcome"?

The once mandatory phrase has been replaced by annoyingly casual responses, to which I say: No, thanks! 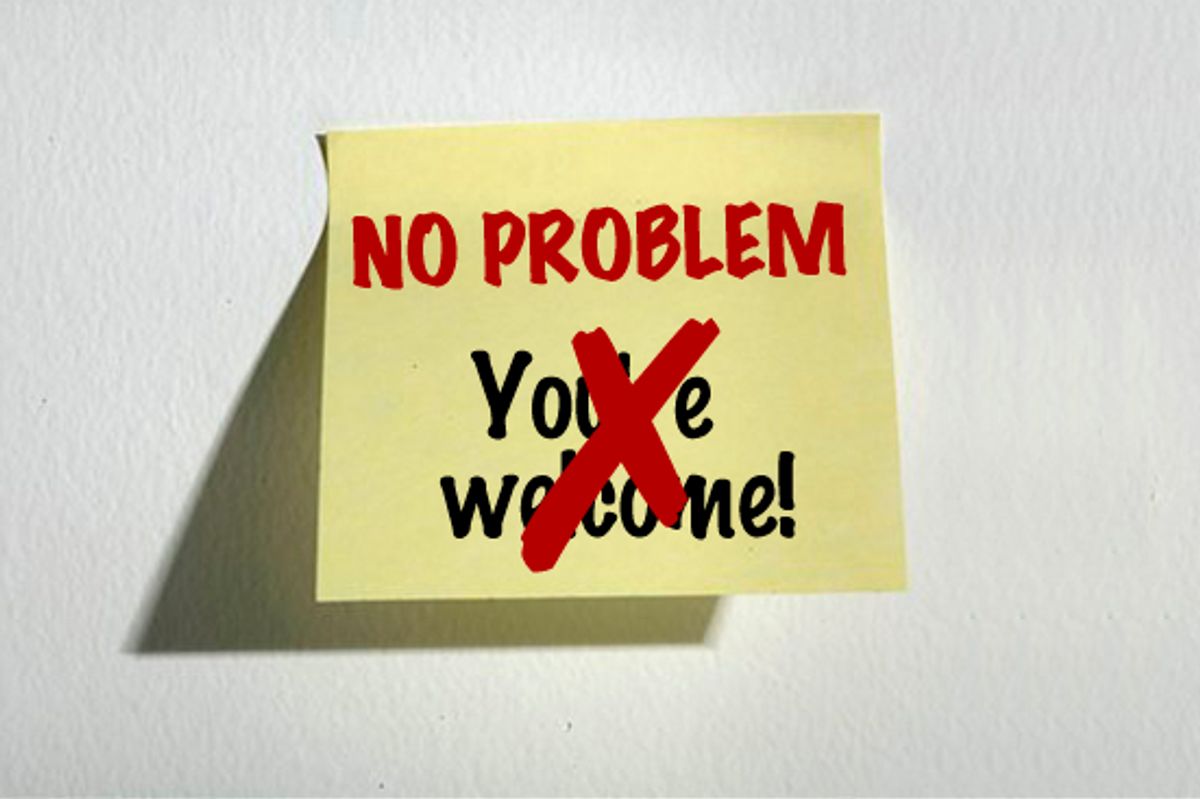 In this photo made Tuesday, Jan. 26, 2010, a Post-It Note, a 3M product, is shown in Philadelphia. 3M said Thursday, 2009 closed on a strong note and it's raising its profit expectations for the new year. (AP Photo/Matt Rourke) (Matt Rourke)
--

So I go to the corner Rite-Aid and buy some batteries, paper towels and shampoo. The clerk bags the goods, hands me my change (coins wrapped inside the receipt and bills in a sweaty, dumpling-like wad) and says, "Here you go."

His response: "Not a problem."

A couple hours later, I order lunch at a coffee shop. The server brings the food. As she sets it on the table, I say, "Thank you."

"No problem!" she replies.

What ever happened to "You're welcome"?

Yes, I know, this is a tiny thing to obsess over. But it irritates me to an extent that cannot be captured in print without the use of capital letters, boldface, italics and multiple exclamation points, none of which would make it past Salon's copy desk. In an ideal world I'd convey my passion by teleporting Jack Nicholson into the room with you so that he could screw his face into a mask of constipated rage, half-clench his fingers as if he were about to strangle somebody, and growl the phrase with the impotent fury it requires: What ever happened to "You're welcome"?

Am I crazy, or have you noticed this, too? Does it throw you off balance just a bit, and make you wonder — as I sometimes wonder — whether "You're welcome" was once common, or whether you only imagined it was common and are only now waking up to the harsh reality that the rest of the civilized world collectively considers "You're welcome" to be a quaint but useless locution — a verbal affectation akin to filling one's everyday speech with obsolete vernacular like "Right on!" or "cockamamie" and "daddy-o"? (Luckily I found allies among friends and family, and at the New York Observer.

Maybe it's my fault. Maybe I create little hothouses in which annoyance can flower by habitually blurting out "Thank you" to people who, as representatives of the commercial establishment, should be thanking me first. But the disappearance of "You're welcome" is a phenomenon not confined to commercial transactions. Just the other day I saw a young man hold open a door for a woman. Woman: "Thank you." Man: "Not a problem."

Since I began irritating friends with this complaint a few weeks ago, I've been informed by people who sincerely believe they have my best interests at heart that language and culture are forever evolving — that certain phrases supplant other phrases, the replacement phrases serve the same function as the originals, and if you let this organic process bug you, you're overcomplicating your life and perhaps contributing to the onset of high blood pressure, kidney stones and whatnot.

They might be right. But that doesn't change the fact that I can't remember the last time I heard "You're welcome" in any daily context save an exchange with familiar, like-minded people who believe, as I do, stubbornly and perhaps irrationally, that "Thank you" should be answered by "You're welcome."

What's my problem with "No problem"? Maybe it's my cranky suspicions that the phrase implies an imposition on the part of the person saying, "Thank you."

"No problem" translates as, "What I did for you was not the sacrifice you so charmingly believe it to be. I hereby release you to get on with your day, blessedly free of guilt."

In other words, "No problem" reverses the terms of the transaction. Rather than your doing a favor for an establishment by shopping there, suddenly the establishment is doing you a favor by having its employees help you, then reassuring you that it was no big deal, seeing as how you were already in the store and all.

I'm similarly annoyed by the man who told that woman it was not a problem to hold the door for her. His response, like the various clerk-server responses mentioned above, reverses the historically accepted terms of a routine encounter. It was once expected that gentlemen would always open doors for ladies because the gesture was more than a gesture. It was a puny vestige of chivalry, a token of appreciation toward the gender that does the whole human race a favor by carrying life inside of it. In this context, "No problem" translates as: "Don't worry, holding that door didn't cost me anything but a few seconds of my life and a handful of glucose molecules — so carry on, lady!"

I asked my friend William Speruzzi to speculate on my problem with "No problem." He said, "Maybe by the employee saying, 'Not a problem,' they are overstating the obvious." I was annoyed, William said, because inside I was thinking, "No, it's not a problem. It shouldn't be a problem. It's your job!"

Another friend, Peter Steinberg, thinks the substitution of "No problem" for "You're welcome" is the result of a cultural shift that can be traced to an influx of citizens whose speech is descended from Romance languages.

"The traditional English language response is 'You're welcome,' i.e., 'Yes, I did something for you, but you sure deserved it," Peter said. "The traditional Romance language response is something like 'De nada'/'It's nothing,' i.e., 'What little I did for you is not worthy of acknowledgment.' In both cases, the thankee is trying to relieve the thanker of any sense of obligation. It sounds 'off' when the Romance formulation is used in English, but if it's meant sincerely, I think it's just as good."

I suppose the sensible thing to do would be to accept Peter's explanation and give myself permission to stop fretting over what is, in the greater scheme, a piddling shift in the dynamics of a typical day, so minor that it's hardly worth ranting about. If I take Peter's advice, I might live longer.

But before deciding to give up and move on, I need to know what you think.

Am I correct in believing that a two-word phrase — very possibly the most direct and unfussy acknowledgment of gratitude in the English language — is fading fast, and might be poised to go the way of dodo birds and 8-track players? And if I am right, is there any compelling reason to lament its passage?

Or should I just take a nice long look in the mirror and admit that I see a grumpy, prematurely old white man who's giving himself agita over things he can't control, and who really should save his money so that he can buy a house with a lawn that he can warn kids to stay off of?

And if you've read this far, thank you.