Libraries get a mall makeover

A Texas branch aims for shoppers -- and thrives. Should the rest of the country follow suit? 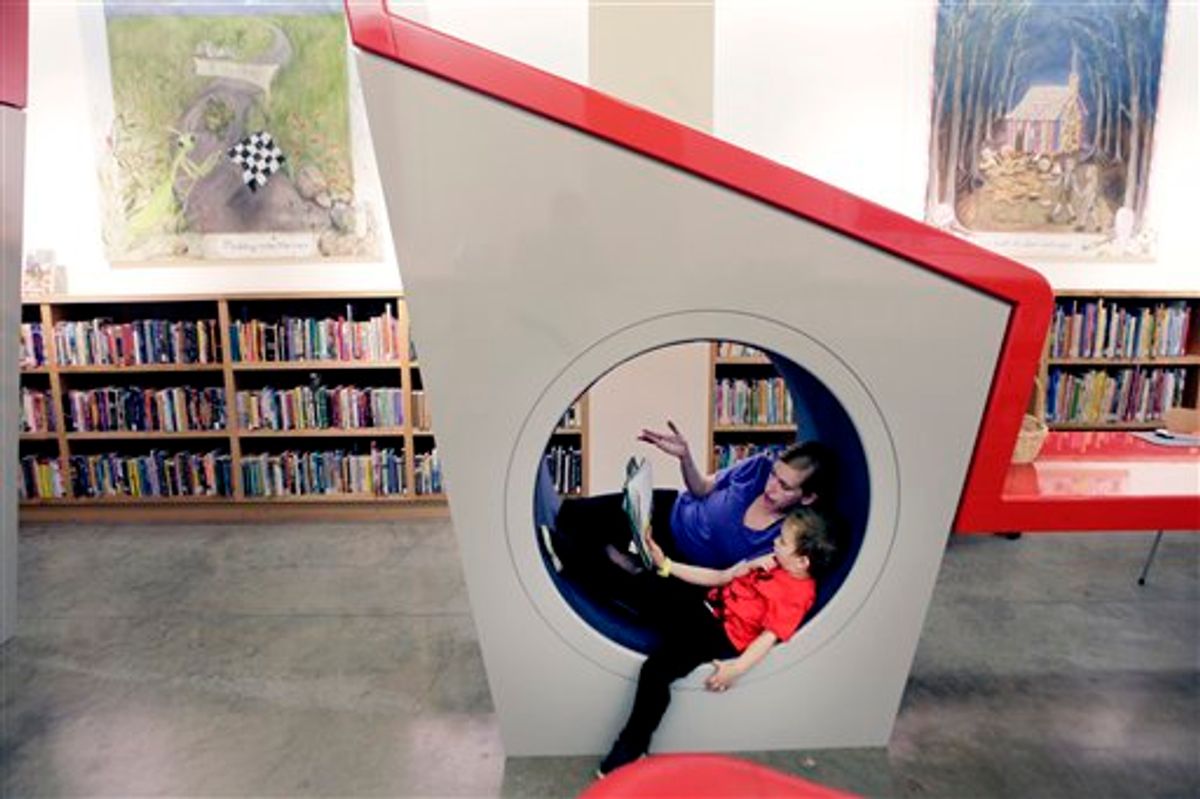 In this photo made Friday, June 25, 2010, Prisilla Gluckman reads to her four-year-old son Oscar Gluckman at Bookmarks, a Dallas Public Library Branch at NorthPark Center mall in Dallas. In the first two months after it opened in NorthPark Center, Bookmarks issued more than 700 library cards. Two years after it opened at the mall, the library for kids 12 and under has an inventory of about 5,000 and circulates as much as branches eight times that size with both adult and children's books. (AP Photo/LM Otero) (AP)
--

Like trucker hats and last week's version of the iPhone, libraries have an image problem. Wait, did you say libraries? Those places with the passed out homeless people and the twenty-year-old editions of the "World Book"? You mean, people actually still go to them? Combine the public reticence to hobnob with vagrants with the imminent obsolescence of books altogether with an economy that's forcing crippling budget cuts, and you might understand why desperate times require dire measures. Like making libraries more like Starbucks.

A Tuesday Associated Press story on the runaway success of a Dallas library located in a downtown shopping mall shows what can go right when you put libraries in the path of receptive consumers. In just two years, the NorthPark children's library has blossomed into a bustling local hub that checks out more books than branches eight times its size. And Dallas isn't the only city innovating the look of the seemingly stodgy institutions. A Wichita library rests inside a grocery store, and the Princeton library offers a bookshop, café and that most irresistible bourgeois hangout -- a greenmarket. Elsewhere, libraries "have built cafes, provided downloadable books or installed drive-through windows." After all, if it can work for McDonald's, which recently tweaked its grim interiors to add comfy chairs and a warmer color palette,  imagine how helpful a revamp could be in enticing people into places that don't even have Happy Meals.

But despite an encouraging bump in library use (overall participation is up nationally in the last decade) numbers don't reflect perception, nor do they save small branches from reduced hours and closing altogether. My own neighborhood branch, on a strip that has neither a bookstore nor a yuppie coffee chain, has already reduced its hours once so far this year.

You'd think libraries would pretty much sell themselves -- the way they let you borrow books and movies and music completely free of charge trumps even Netflix itself. But say "library" and just watch the "you are a dork" look cross people's faces. I can, off the top of my head, think of three times recently that various educated, erudite friends -- one in his twenties, one in his thirties and one in his forties -- regarded my library books like they were rotary phones. "I haven't seen one of those in a long time," said one, chuckling indulgently.

I can understand the prejudice. A trip to the library is a trip out of the way that a click to an online bookstore is not. There's also a not so faintly classist "Can't you afford your own book?" stigma that a cellophane-wrapped cover repesents. And while I may love the risk-free nature of borrowing a novel I might not want to blow thirty bucks on -- or the NYPL's free classes and concerts and the Run-DMC CD I checked out last week -- I know my branch is still a pretty bleak place, and that keeping the "public" in public libraries is a major dilemma to the people who run them. How do you make them inviting spaces for the lounging while discouraging loitering?

A few have come up ingenious strategies like playing classical music to keep patrons who might otherwise be caught napping moving along, but the question of whose space the library is -- and how it's used -- represents an ongoing challenge for attracting patrons.

But watch out, hipsters: The trendiest strategy might be to head to those libraries that don't serve lattes -- at least not yet. Think of the early adopter factor of getting in before the couches and piped in Michael Buble. And while an item with a Dewey decimal number on the spine may not make you look as cutting edge as an iPad does, hipsters, your retro cred will be off the hook.