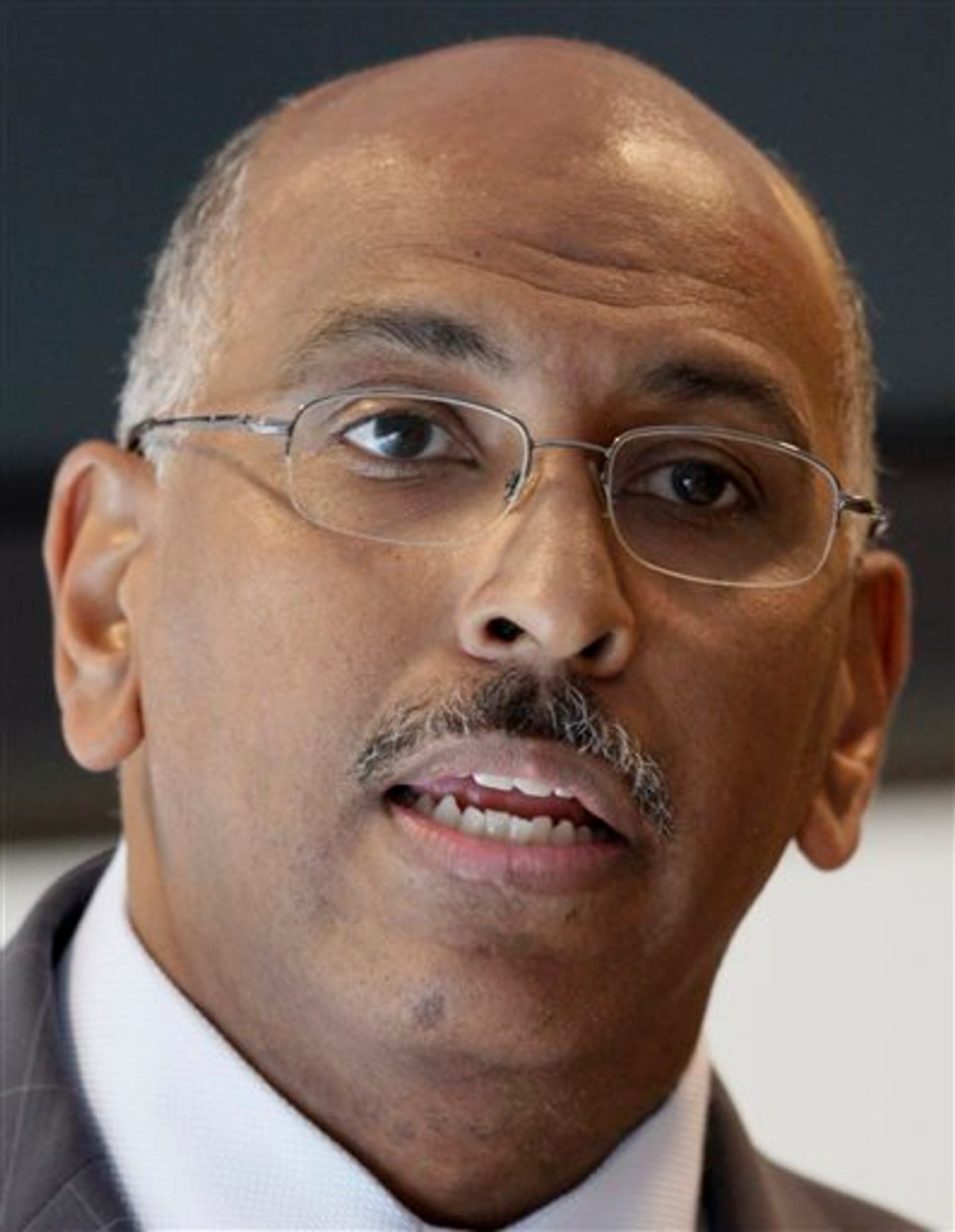 By last March, perpetually embattled RNC chairman Michael Steele had already cultivated a reputation as something of a gaffe machine. But according to Steele, all of his supposed horrific blunders were, in fact, clever feints.

In other words, Steele would have us believe he was playing eleven-dimensional chess all along. Such a claim was always transparently ridiculous, but it seems even more so in hindsight; whatever game he was playing might be more closely likened to Russian roulette. Solo Russian roulette. Now, as he faces an insurrection within the GOP over his anti-Afghanistan War remarks, it appears he finally discovered a live round in the chamber.

Yes, it’s hard not to resist the siren song of sweet, sweet schadenfreude. The Michael Steel Comedy hour, after all, is (was?) one of the few sideshows in Washington politics one could enjoy guilt-free. His misadventures, unlike those of, say, John Boehner, do not have real-world policy consequences. And for liberals, Steele’s Michael Scott-esque ability to say exactly the wrong thing with astonishing frequency was a nice exception to the “Republicans have ironclad message control and Democrats have Joe Lieberman” rule.

No wonder, then, that Republicans have seized the opportunity to try and force Steele out for good; his high-profile humiliations are matched only by the RNC’s incompetent fundraising under his tenure. Despite all of this, Steele was nearly invincible until now, insulated both by RNC bylaws and optics (imagine what a public relations nightmare it would be if the GOP—long haunted by its troubled relationship with white identity politics—forced out one of its few prominent black members, who they appointed primarily to distance themselves from that troubled relationship).

Barring acts of God—or, perhaps, a sex scandal—the only recourse available to the rest of the party was to wait for Steele to say something so repugnant that they could plausibly demand his resignation en masse without leaving any room to interpret this demand as a race thing. Keep in mind that Republicans could not turn on Steele over just any controversial remarks; it would be hard for him to utter a sentence more offensive to our critical faculties and basic human decency than what you hear excreted by Sarah Palin and Rush Limbaugh on a regular basis, and yet the party continues to embrace them both. If the GOP turned on their chairman for the same infractions they made excuses for—and even celebrated—elsewhere, they risked looking like hypocrites, or even alienating their base.

Lucky for them, Steele provided one shining, golden opportunity. He committed the one act the Republican Party finds more vile than consensual gay sex: he unintentionally offered some mild criticism of his party’s own platform.

How deliciously, tragically ironic that Steele made this fatal stumble in doing exactly what the RNC appointed him to do. Forget policy, consistency, or coherence; a good chunk of his job description is attacking President Obama at every available opportunity, and his condemnation of the war in Afghanistan was little more than a pretense under which to do just that. Sadly, when he assumed that the party’s blind hatred of the president would win out over their blind embrace of military conflict in all its myriad forms, he grievously miscalculated.

But if Michael Steele’s reign of error comes to a characteristically ignominious end, that will be far from the greatest pity in this whole fiasco. The far sadder story is the narrowing this represents in mainstream debate over Afghanistan, as the leadership of both major parties concludes that the only acceptable position to take is a stalwartly pro-war one. It’s one thing to watch John McCain reflexively support American military involvement with every country whose name he can correctly pronounce; it’s quite another to see the DNC simultaneously embrace over-heated anti-dissent rhetoric that sounds like it was pilfered verbatim from a Karl Rove-authored internal White House memo circa 2003.

I am not taking a position on the merits of Steele’s claims; assessing the goals and current status of our efforts in Afghanistan is, as Todd Gitlin points out, a mind-bogglingly complex endeavor, and I don’t have the expertise for it. But opposition to the war is not a fringe position, and at least one highly respected foreign policy expert -- Steve Clemons -- has stepped up to defend Steele’s remarks. It appears that in the case of every liberal’s favorite RNC chair, even a stopped clock occasionally says something mildly plausible.

But that clearly isn’t how the vast majority of elected officials on either side of the aisle see it. And so, rather than having a deeply needed debate over the merits of our mission in Afghanistan, they continue to behave as if there is no debate to be had.