Now that the Purple One has declared online music "over," we predict his other brilliant insights into the future 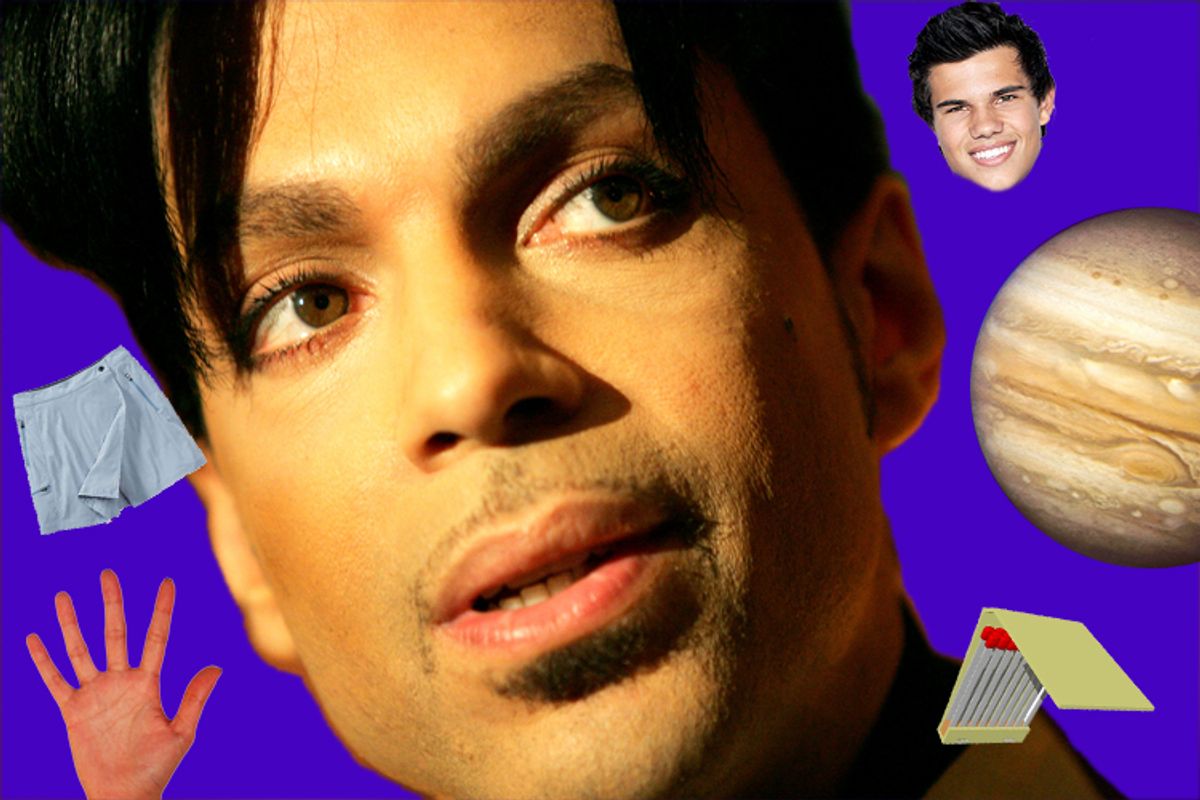 On Tuesday, the Internet was shocked to find itself mourning its own demise after Prince declared to the U.K. Mirror that "The Internet's completely over." Chatroulette, apparently, was just the tip of the iceberg. Explaining why he shut down his website and is releasing his new album "20TEN" on CD only, His Royal Badness continued (about online music sales): "The Internet's like MTV. At one time MTV was hip and suddenly it became outdated. Anyway, all these computers and digital gadgets are no good. They just fill your head with numbers and that can't be good for you." The Internet, no good? Has he ever seen a puppy cam?

In addition to the Internet, MTV, computers, digital gadgets and numbers, the artist formerly known as the Artist Formerly Known as Prince furthermore pronounced that "self-interest is on the back burner now." He did, however, give thumbs up to the Bible, raw vegetables and electric guitars, noting, "I'm convinced all that electricity racing through my body made me keep my hair."

As we sit here exhaling our dying gasps, we the Internet would like to thank our undisputed musical hero for his uniquely magisterial insights. But just as surely as the Purple One loves backless pants and prognostication, we too possess special intuition. Channeling the spirits of Jimmy Jam and Terry Lewis, we herewith offer the unrecorded, unspoken and frequently incomprehensible portions of Prince's Mirror interview (or, at least, how we picture it in our minds), the better to guide all your own future decision-making:

Smoothies: "Smoothies are like the electric guitar of fruit, man. You can take a strawberry and a banana, put them in a blender and bam! They're funkified."

Vampires: "Vampires are sexy and all, but there's something about Jacob. Am I right? Yeahhhh, I'm right." (laughs quietly to self)

The Bachelor: "That Vienna's got a good name. Viennnnnnaaaaaaa. Hard to rhyme, but not as hard as Apollonia. Vienna's better off without Jake. Did you see that pussy on "Dancing With the Stars"? My underpants got better moves."

Jupiter: "Everybody thinks, oh, you're all into Saturn because of the rings thing. But have you seen the great red spot? Now that's some serious anti-cylonic activity."

Skorts: "I see a woman in skirts, I think, why aren't you wearing a romper, pretty lady?"

Disposable lighters: "You got to want the fire. You got to work for it. Matchbooks, you know what I'm saying? You can't write Vanity's phone number on the inside of a Zippo."

Knitting: "I don't want to talk about that. Crochet is where I'm at now."

Hands: "Hands are beautiful, even if you can't put shoes on them."

Table manners: "Look, back in the day, everybody was chewing with their mouths open. But this new generation -- they're not about see food. And you got to put a damn napkin on your lap too. That's the straight up what's what."

Roombas: "If you want something that'll clean your floor while it runs around your house, call Morris Day."

Pens: "Have you ever heard the mating song of a beluga whale? That's what opening a new box of PaperMates feels like."

Vuvuzela: "Have you heard DiCaprio on that thing? I'd love to jam with that cat."