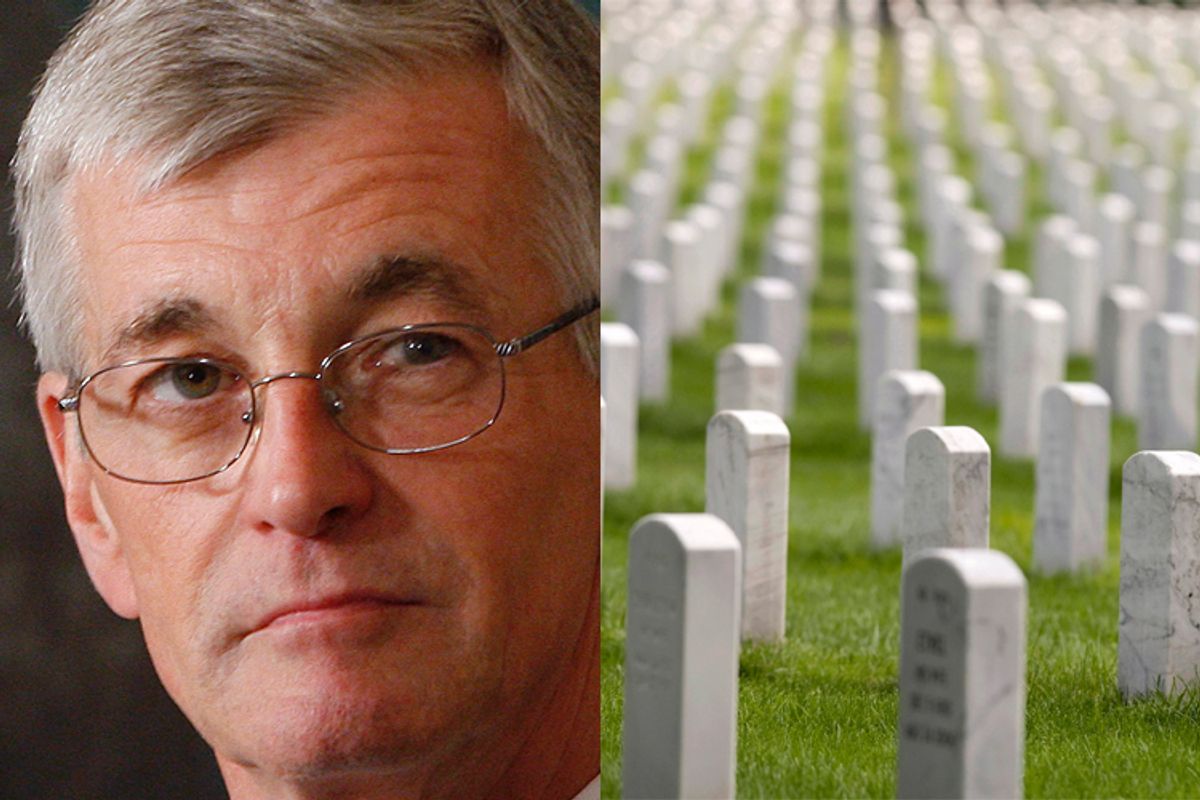 More than two years ago, an employee at Arlington National Cemetery warned Maj. Gen. Richard Rowe, commander of one of two Army offices that oversee the cemetery, about many of the serious problems that would later blow up in a scandal involving misplaced remains and millions in squandered funds.

On June 25, 2008, Gina Gray, who was then Arlington's spokeswoman, hand-delivered to Rowe a binder of materials that detailed "allegations of failure to follow Army regulations, contract fraud, and budget mismanagement" at the cemetery. Gray's lengthy, face-to-face meeting with Rowe is documented in a June 29, 2010, report on Gray by the Defense Department inspector general that was obtained by Salon.

At the time, Rowe was the commander of the Military District of Washington, one of the main Army offices with responsibility for overseeing what goes on at Arlington.

The revelation of Gray's warning to Rowe appears to conflict with testimony by Army Secretary John McHugh before the House Armed Services Committee last week. McHugh pinned blame for the scandal solely on the two top civilians at the cemetery, Superintendent Jack Metzler and his deputy, Thurman Higginbotham. He claimed that Army officials who oversee the cemetery were unaware of the problems, describing Arlington as "somewhat of a satellite sitting off by itself." The information about Gray's binder is one nugget in a 25-page report prepared by Donald Horstman, deputy inspector general for administrative investigations (pdf). The inspector general's office looked specifically into allegations by Gray that cemetery officials fired her in retribution for alerting military officials and Congress of various problems at Arlington. The investigation began after Gray appealed to that office back in October 2008. Pentagon sources say the report has been tied up for months in squabbles over how to handle Gray's case, particularly as the scandal at the cemetery began to unfold over the past year in a series of articles in Salon.

The report chronicles a series of efforts by Gray during her short tenure (from mid-April to the end of June 2008) to draw attention to problems at the cemetery. At first, Gray, in her capacity as cemetery spokeswoman, was mostly concerned about top cemetery officials limiting media access to funerals in cases in which families had agreed to coverage, an apparent encroachment of Army regulations. But by the time she met with Rowe in late June, Gray had become aware of more malevolent problems as well. In a brief telephone interview, she confirmed that her apprehension grew over time as she noticed potential problems at Arlington, for instance when she discovered that cabinets in the copy room inside the administration building also served as a de facto repository for urns awaiting burial.

Among the steps Gray took: In an April 25 e-mail, she warned Ryan McCarthy, special assistant to the defense secretary, about the media access issues, prompting correspondence between top cemetery officials and the secretary's office on that topic. (Gray copied cemetery officials on that e-mail to McCarthy). On June 6, Gray wrote then- Sen. John Warner, R-Va., about the media access problems. Warner responded in a June 24 letter by questioning the Pentagon about Gray’s concerns. On June 25, Gray met with Rowe and delivered her binder with material documenting a growing list of irregularities at Arlington. Cemetery officials fired her two days later.

The inspector general's conclusions are brief and tricky to decipher because key names in the report are redacted. Without much explanation, however, the inspector general determined that while firing Gray was an "obvious failure of personnel management," it was not an act of retribution for her whistle-blowing. A "preponderance of the evidence" suggested that top cemetery officials didn't know about Gray's whistle-blowing efforts, despite all the correspondence about the concerns she raised, according to the report.

Arlington is embroiled in a widening scandal involving misplaced remains and the funneling of millions of dollars to contractors who were supposed to fix the problems by computerizing the cemetery's fallible, paper-laden burial records operation, but who did little or nothing in return for the money.

The spokesman for the Military District of Washington, Lt. Col. Rob Manning, did not respond to questions about what, if anything, officials there did to follow up on the concerns Gray brought to Rowe in 2008.

The Army, which oversees the cemetery, has conducted the only broad investigation so far into the cemetery scandal. Its report was released June 10. No Army brass or high-level Army civilians were implicated in that investigation.