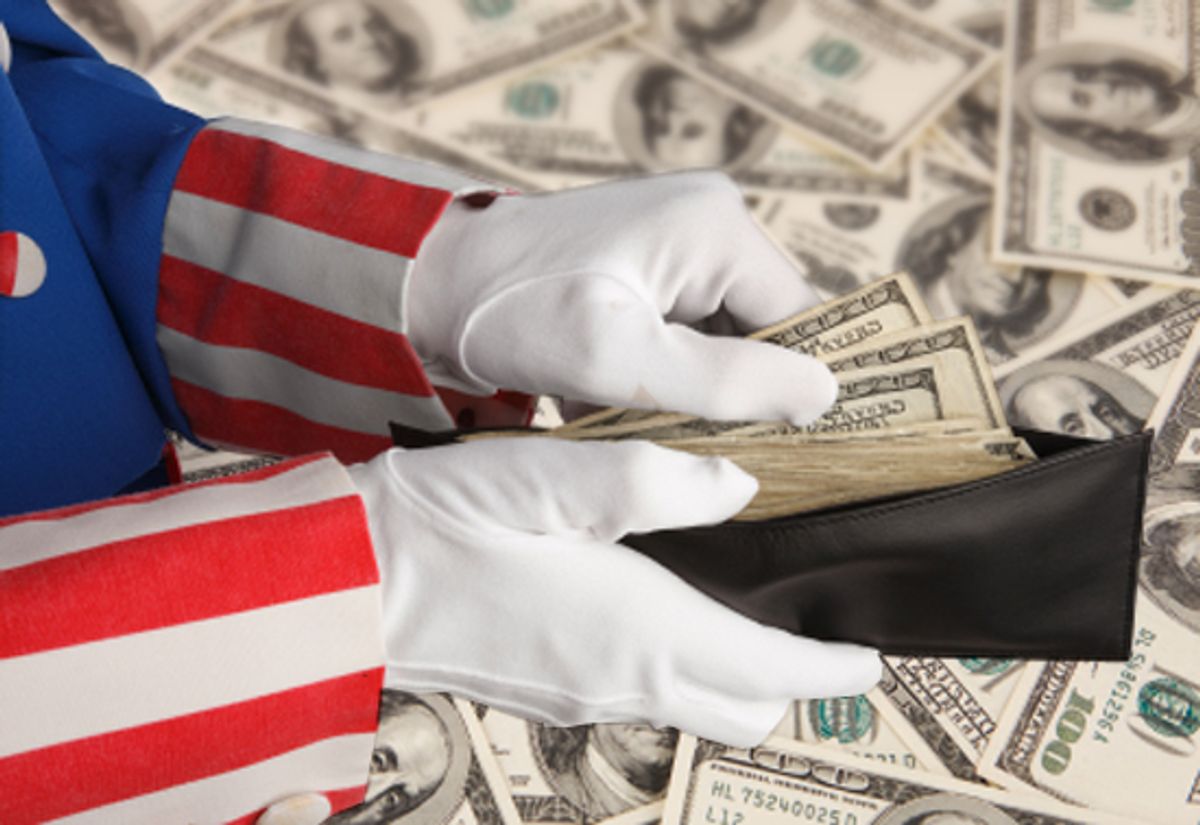 The new conventional wisdom in Washington is that more spending to promote job creation is out of the question, because the public has changed its priorities and is obsessed with the danger of federal deficits.

The actual views of the American people are at odds with the corporate media’s portrayal of a nation of deficit hawks. According to a June 11-13 USA Today/Gallup Poll, 60 percent of Americans favor "additional government spending to create jobs and stimulate the economy." Only 38 percent of the respondents opposed the proposal, while 2 percent had no opinion.

Federal deficits are an obsession with American elites, including many establishment Democrats. But deficit reduction is not the leading priority of the American people. In another USA Today/Gallup Poll, taken March 26-28, the list of issues considered “extremely important” by voters was headed by the economy (57 percent), followed by healthcare (49 percent) and unemployment (46 percent). The federal budget deficit came in fourth, at 45 percent. Note to the Obama administration and Congress: Fewer than half of Americans think that the federal budget deficit is an “extremely important” issue.

Back in March, the only group in which a majority listed the federal budget deficit as extremely important comprised independents (52 percent). The deficit was less important for Democrats (37 percent) and Republicans (47 percent). Inasmuch as supply-side economics is a variant of Keynesianism, it is not surprising that conservative Republicans and liberal Democrats alike should be less concerned about deficits than independents, who seem to share the views on this subject of Ross Perot's followers of the 1990s.

On the basis of that poll and similar ones, many have concluded that in order to reduce the defection of independents to the Republicans in the fall, the Democrats must at least make a show of being deficit hawks. But other polls suggest a different strategy. In the June USA Today/Gallup Poll, majorities of Democrats (83 percent) and independents (52 percent) supported more stimulus spending. Only the Republicans opposed it, by 61 to 38 percent. How can it be argued that Democrats need to appeal to independent swing voters in the fall by denouncing deficits, when a majority of those independents side with Democrats against Republicans on the need for more spending to spur job creation?

Is it possible to be in favor of more federal spending now to save the economy and promote jobs, while being in favor of deficit reduction in the long term? It is not only possible, but necessary. The more rapidly the economy grows, and the greater the number of Americans who are employed, the higher tax revenues will be and the sooner federal deficits can be reduced without measures that would cripple the economy, like raising taxes and cutting spending in the middle of a near depression.

On this issue, President Barack Obama has failed to articulate a position that is both right and popular. Instead of emphasizing that borrowing more to pay for infrastructure investments and job creation now will pay off in greater revenue growth and faster deficit reduction later, he has taken measures like proposing a freeze on deficit spending and supporting the deficit commission, with its right-wing bias. By doing so, he has effectively conceded the right-wing argument that the federal government is spending too much in combating the Great Recession at the present moment, instead of what is in fact true —it is spending too little. (If Obama sincerely believes the former, then he is the wrong person for the job, and economic leadership will have to come from Congress, not the White House).

Further evidence that Americans are more concerned with job creation and shoring up social insurance comes from the AmericaSpeaks "town hall" forums sponsored by deficit-hawk billionaire Pete Peterson. As numerous commentators have pointed out, Peterson must be disappointed if he expected these forums, coming shortly after his associate David Walker’s deficit-fear-mongering "IOUSA" movie and discussion tour, to demonstrate public support for the case he has made since the 1990s, in good times and bad, for major cuts in Social Security and Medicare.

Indeed, an extraordinary 85 percent of AmericaSpeaks participants favored lifting the payroll-tax cap. This option was mentioned by Obama in his 2008 presidential campaign, but despite its popularity with the American people, it is not to be found in mainstream discussions of Social Security, which are instead focused on cutting benefits and forcing elderly Americans to work longer. Obama is partly responsible for this, because his administration ruled out any increases on taxes for people making under $250,000 a year.

Here we have a clue to the oligarchic nature of the contemporary American political system. As observers pointed out during the campaign-year debate about lifting the cap on payroll taxation, only the top 5 or 6 percent of American wage earners would be affected. But that tiny minority includes the overwhelming majority of politicians of both parties, as well as think tank experts, elite journalists and other opinion makers — to say nothing of the donors to both parties. Is it coincidence that affluent members of the bipartisan political class, whose members pay considerably less as a percentage of their income to Social Security than do janitors and maids, want to keep it that way? And is it coincidence that members of the elite political class, who are the least dependent on Social Security for their retirement income, are the most vocal about making the less-well-off majority work longer in order to receive less?

In the Roman Republic, the two parties were the populares, representing the ordinary citizens, and the optimates, representing the hereditary elite that controlled the Senate. Analogies between Rome and the U.S., particularly in foreign policy, should be taken with a grain of salt, but we do seem to be re-creating something like the politics of late republican Rome, right down to a Senate controlled by rich, reactionary optimates and the equivalent of Rome’s slave population in the form of illegal immigrants and indentured servants like H-1B’s who labor on American soil without the civil and political rights of Americans.

The apparent lack of interest on the part of our elected officials in the actual views of the American people about Social Security, stimulus spending and other subjects makes sense, once it is understood that most ambitious Washington policymakers of both parties seek to engage in triangulation between the party of the people (non-elite Democrats, Republicans and independents) and the party of the oligarchy (elite Democrats, Republicans and independents). The politically attractive position is the one that will be least alienating to the non-elite majority and the elite minority, two groups that are given equal weight in spite of the great disproportion in numbers between the two.

If the populares were the ignorant yahoos that the press controlled by the optimates would have us believe they are, then we might welcome the check on mob passions provided by our oligarchic institutions like the U.S. Senate. But when it comes to support for more federal spending to combat the Great Recession and raising taxes on the affluent rather than cutting benefits for the needy as the solution to Social Security revenue problems, sound economic analysis and the preferences of the majority are aligned.

Michael Lind is the policy director of the Economic Growth Program at the New America Foundation and the author of "Up From Conservatism: Why the Right Is Wrong for America."