"The Flooded Earth": Which of our cities can be saved?

New York makes the cut, but Miami and Oakland are endangered. An expert explains our grim, watery future 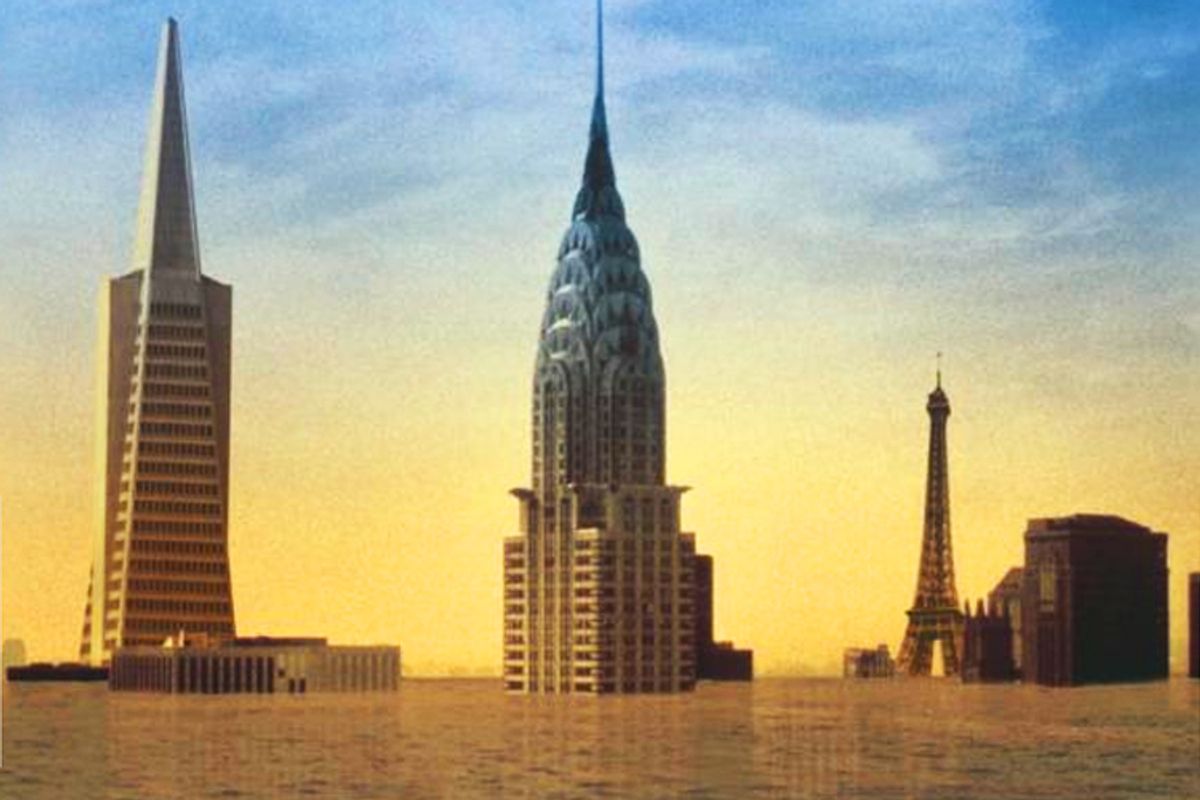 A detail from the cover of "The Flooded Earth"
--

By 2100, the world will probably be a very different place than it is now. It will be warmer, of course. It will also contain an awful lot more water. In recent years, scientists' predictions of sea level rise have been growing considerably more dire, estimating an increase of up to 5 feet by the end of the century, along with widespread coastal flooding, hunger and population displacement. It's rapidly becoming clear that humanity will have to make some difficult decisions over the next decades, most notably about which low-lying cities and landmarks are worth saving. In the flooded future, can we hope to preserve Venice? Or Amsterdam? Or even Miami? And if so, at what cost?

In his new book, "The Flooded Earth: Our Future in a World Without Ice Caps," Peter D. Ward, a professor of biology and earth and space sciences at the University of Washington, takes a look at what the latest predictions in sea rise will mean for the future of human civilization. In the coming decades, he argues, vast swaths of agricultural land will be ruined by encroaching salt water; the increasingly ice-free lands of Greenland and Antarctica will become contested and ever-more valuable, and our coastal cities' spiraling preservation costs will bleed our economies dry. The book is a beautifully written, thoroughly researched and relentlessly terrifying work, and a must-read for anybody with an interest in the environment or the future of our planet.

Salon spoke to Ward over the phone from Seattle about the world's most threatened regions, the future of New York, and why the 21st century will belong to Canada.

Why is the rise in sea level really such a huge deal?

There are three big reasons. There are the economics, because sea level rise is going to cost us a whole lot of money. And then there's food, because sea level rise is going to wipe out an unbelievably high percentage of the agricultural areas that we're extremely dependent upon, deltas in particular -- they are, by definition, at sea level and they produce the majority of the rice on the planet.

And then the third thing is people. A 3-foot sea level rise will cause a large part of Bangladesh, for example, to either disappear or be unfarmable, so you're displacing millions of people physically. This becomes way worse when you couple it with the food part of the equation. The number of people on the planet is expected to be 9 billion by 2050 and steadying out at 9.5 or 10 billion by 2100, so you've got one-third more people and maybe 20 percent less food. You do the numbers.

What are the high and low estimates for sea rise by the end of the century?

The most extreme (that you can put real scientific confidence in) is 5 feet by 2100. The most conservative at this stage is slightly less than 1 meter, or about 2.8, 2.9 feet. The best, most levelheaded predictions and models comes from Stefan Ramsdorf, just outside of Berlin in Potsdam. He's now saying at least 3 feet by 2100, with 5 feet not out of the realm of possibility.

What parts of the globe are at particular risk of disappearing?

Of the big nations, Bangladesh and Holland stand out as the two most threatened. The one that should scare humans the most is Bangladesh, because they're currently the size of Illinois and they have over 120 million people, but they'll probably be double that population by the end of the century. So you have over 200 million people, in a country that's going to lose a third of its land. And where are they going to go? I just can't imagine a scenario where there aren't going to be military clashes.

In the book, you argue that some cities, like Venice, are going to have to be abandoned because it will become too costly to keep them dry. What about American cities?

At 3 feet, 4 feet, or 5 feet, you can save New York. But what the city planners never thought about is that so much of their infrastructure is below the ground and none of them have planned for salt water. Salt water is a completely different engineering hurdle.

Some of the very low-lying cities in the San Francisco Bay aren't savable. San Francisco's got high ground, but a lot of Oakland is really low ground and the entire San Jose region is hugely threatened. You can kiss Miami and Galveston goodbye, and those low-lying areas around Houston. All the Gulf cities. New Orleans, of course, is among the most endangered. I think by 2200 each of those will be in the throes of being abandoned, if not already abandoned.

Some countries are going to be in a better position economically and environmentally, post-sea level rise. Like who?

Canada and Russia. Those are the two big ones. Canadians are going to be in such a sweet position, because along the west coast, they've got the Coast Mountains. Vancouver itself is going to have to field dark times, but they can move up the Frasier River Valley a long way. One of the real interesting things is whether rising sea level is going to cause some massive inflow into the Great Lakes, but I think Canada will be able to engineer its way out of that. The grain belt should bloom. Canada is going to have longer growing seasons, warmer temperatures.

So where does that leave the United States?

American corn-producing regions are projected to be a dust bowl in this new climate. We're supposed to lose a whole lot of that topsoil. The Hispanic population is the fastest-growing segment of American populations, but they’re growing in places that have the most water accessibility problems, like L.A. and Arizona.

As global warming increases we will no longer get snowpacks in many mountain ranges, and we really depend upon snowpack for agriculture. The runoff has to melt in the spring to keep reservoirs for summer agriculture. The Sacramento Valley and the San Joaquin Valley and these guys depend upon the Sierra Nevada, and already that snowpack is disappearing.

One of the biggest dangers of sea level rise that you mention in the book is the storm surge. Why is it so destructive?

We'll be introducing salt-water storm surge to areas of land that have never experienced them. Once you’ve introduced salt water into a marsh or another area, you’ve got a lateral movement of salt water. This is why the San Joaquin Valley is in so much trouble. That water gets into agriculture. Storm surges are a battering ram for human structures, but it's also a battering ram for agricultural fields.

A lot of the book deals with the thinning of ice in Greenland and the Antarctic. Why is the melting of the ice that covers land more dangerous than the melting of Arctic sea ice?

If you melt Arctic ice, it's like melting an ice cube in a glass. You get almost no net change in water level. Whereas every drop of that ice that’s on land causes the sea to go up at the exact volume that you melt. This is why Greenland and Antarctica are really foretelling much of the future of what's going to happen to civilization.

What kind of infrastructure problems can we expect as a result of sea level rise?

I was down with friends in the Florida Keys, and we were looking at these million-dollar houses, which already have the ocean lapping up against them. Pretty soon these properties are going to be a hot potato. The storm surge is going to start getting at them. And then people are going to sell them to the next sucker and the next. Then there's going to be one last person holding that piece of property, which can no longer be sold.

In Washington state, the railroads were built along the shoreline, and while a 3-foot sea level rise won’t touch them, the storm surge will. Many, many cities decided to build their airports over the water: San Francisco, Sydney, Honolulu, multiple cities in Japan and China. How much does it cost to replace a whole airport? It costs tens of billions, and yet every coastal city needs to do just that, not to mention the freeways and the railroads.

One disastrous possibility that you do discuss in the book is that global warming could cause the end of ocean currents -- and water would no longer be circulating around the world.

In the last several years we thought that every mass extinction was caused by asteroids from space, and yet we now know that only the K-T [Cretaceous-Tertiary event] dinosaur-killer was a rock from space. Every one of the others was associated with enormous greenhouse gas production by enormous volcanic eruptions. The poles become appreciably warmer, but the tropics can't heat up any more, so you lose your heat gradient. Ocean currents slow down. You lose your wind, everything. There's no America's Cup, there's no sailboats, there's no kites. Everything goes stagnant, and a stagnant ocean becomes an oxygen-free ocean, and an oxygen-free ocean breeds very bad microbes.

The forecasts for future sea level rise seem to be getting worse and worse. Why is that?

Scientific predictions based on a model always have a huge error range, but because of the politicization of all global warming, whenever scientists get a range of values, they'll go conservative. No one wants to be branded as some sort of flaming political agenda-ist. These estimates aren't going down, because the amount of CO2 going into the atmosphere keeps going up. And in fact we keep shooting over the worst level projections that people were saying two or three years ago. And here's what has everybody worried: We just went through one of the greatest economic downturns, the great recession, in which the U.S., one of the leading polluters, shut down factories, people went out of work, a whole Western economy's shut down, and yet, we did not see a downturn in the amount of greenhouse emissions.

How do you cope with doing this incredibly depressing research? Do you despair?

Here's what I've lately decided: I'm the little kid in "The Sixth Sense" who sees the dead people. I'm getting really sick of being this Cassandra. I mean, it's kind of miserable. I've got a 13-year-old boy and you go through these scenarios like you as I have done and it's pretty upsetting. But on the other hand I try to instill in him that wherever there's challenges, there are opportunities. I tell my kid right now what you can do to save America is to get the best possible education he can and get political.

We cannot have another generation of apathetic people. We baby boomers, of which I'm one, really helped screw up this world.