Everyone at MSNBC is such a baby 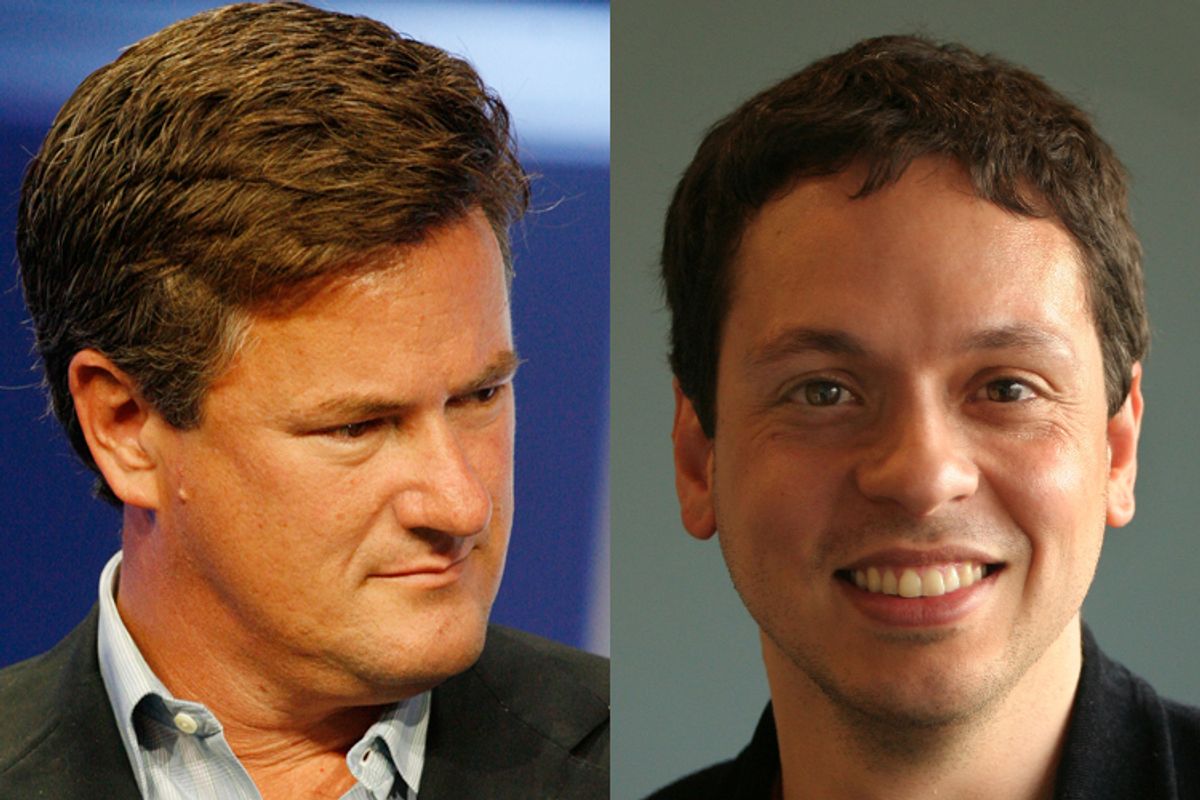 Moulitsas is a prominent and influential liberal blogger and a regular on MSNBC's popular "Countdown with Keith Olbermann," but it looks like Olbermann will no longer be allowed to have Kos on his show, because of this Twitter fight.

Here is what happened: Joe Scarborough "Tweeted" that he was convinced that the media was "negilgent" in covering the Joe Sestak "job" "scandal." Kos responded like so:

markos: Like story of a certain dead intern. RT @JoeNBC: Luckily for the White House, the media has been negligent on this story since Day 1.

This is what Markos is talking about: Back in the summer of 2001, Scarborough, who was divorced at the time, announced his intention to retire from Congress to spend more time with his children. Shortly after that announcement, an intern named Lori Klausutis was found dead in his Florida office.

At the time, the national press was obsessed with Gary Condit, a Democratic Congressmen who was all-but-accused of killing an intern whom he'd been sleeping with. No such attention fell on Scarborough. (Then 9/11 happened.)

Kos was arguing that Scarborough was the beneficiary of a media double standard whereby scandals ginned up by conservative activists receive attention far beyond what they merit. (Kos was also intentionally needling Scarborough.)

Scarborough responded by saying Kos regularly accuses Scarborough of being a murderer, which Kos disputes.

Then, apparently, Kos was told by Phil Griffin, the head of MSNBC, that he is no longer allowed on MSNBC for the foreseeable future.

I'm hoping this will be only temporary and that the situation can be resolved in a mature fashion, but until then I just don't know how one could reasonably expect to be welcomed onto our network while publicly antagonizing one of our hosts at the same time.

I mean... one could reasonably expect that because your hosts should have control over who they get to book on their own shows, right?

Not to mention the fact that half the conservatives who've ever appeared on Morning Joe have "publicly antagonized" Olbermann, or Rachel Maddow, or Ed Schultz. (Like, uh, Andrew Breitbart, who's been on MSNBC plenty of times this year.) (Oh, and Liz Cheney.)

But Griffin seems to want Morning Joe -- the Beltway insider kaffeeklatsch that gets far more media attention than it does viewers -- to be MSNBC's "flagship" show, which means, apparently, making network-wide booking decisions based on whether guests meet the morning show host's approval.

Of course, there have been stories of a certain other MSNBC host attempting to get people banned from the network. I am sure the toughest part of Griffin's job is soothing the massive egos and navigating the clashing personalities at that hilarious middle school of a cable network. But if you give in, they will never learn to play well with others, Phil.