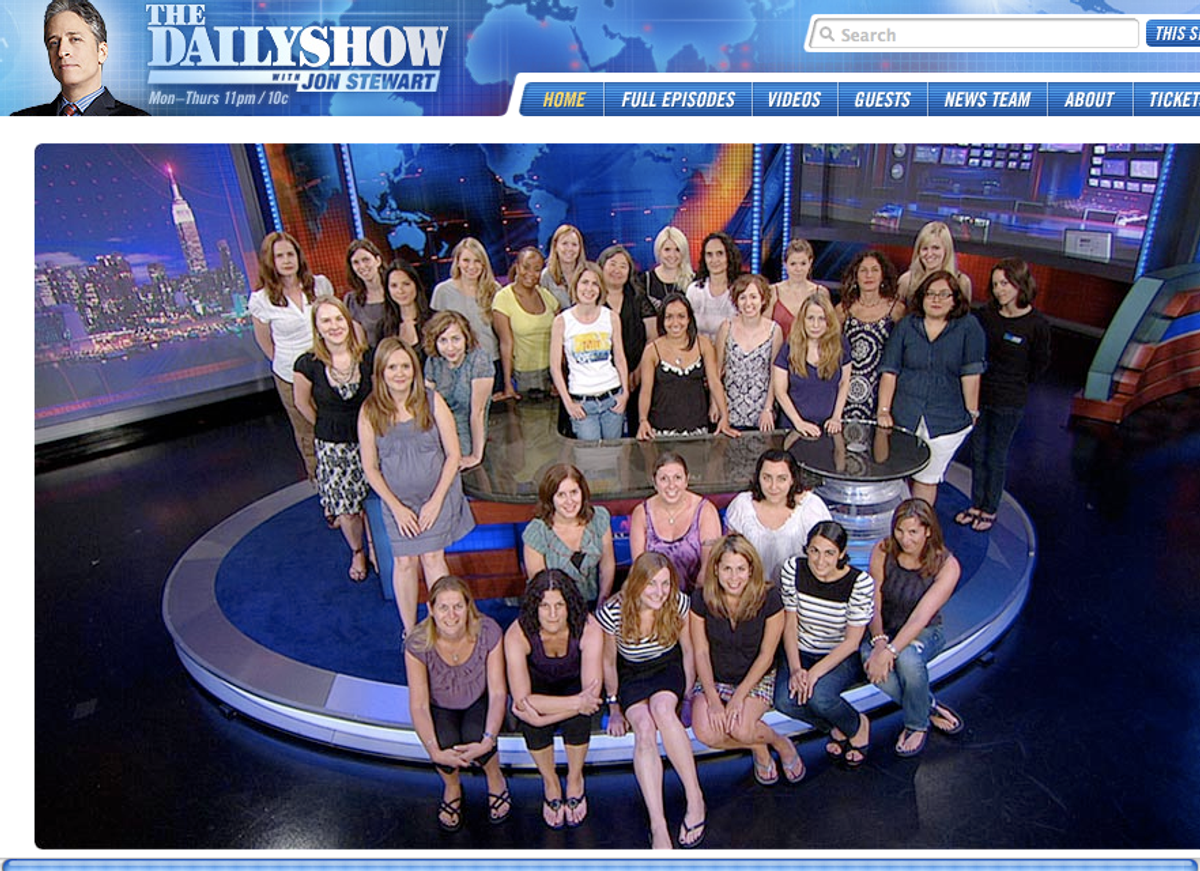 The ladies of "The Daily Show With Jon Stewart" have spoken: Their boss isn't "a sexist prick."

This is apropos of Jezebel's recent allegation that the show has a "woman problem," based on its dearth of female correspondents and interviews with former female employees. A group of 32 current lady staffers have penned an irreverent public missive that begins, ehem, "Dear People Who Don't Work Here." Contrary to what you may have heard, especially amid the Olivia Munn fracas, they want you to know that Stewart is "the opposite of sexist," and their workplace isn't one "where women quietly suffer on the sidelines as barely tolerated tokens." In fact, women make up 40 percent of the staff:

We are co-executive producers, supervising producers, senior producers, segment producers, coordinating field producers, associate producers, editors, writers, correspondents, talent coordinators, production coordinators, researchers, makeup artists, the entire accounting and audience departments, production assistants, crew members, and much more. We were each hired because of our creative ability, our intelligence, and above all, our ability to work our asses off to make a great show.

In a direct dig at Jezebel, whom Stewart called out on-air last week, they include "inadequately researched blog posts" as one of the many things "Jon has supported us through."

It's a funny letter. Funny, in the sense that there is elbow-pumping, eyebrow-wiggling sarcasm at every turn. I'm sad to say that these are easy laughs, not the sort of high-level satire you actually see on 'The Daily Show." It's not exactly the sort of comedic representation I would hope for from the women of Comedy Central.

As for the letter's substance, I'm relieved to hear that the show's current female staffers feel highly valued and don't find Jon Stewart to be a sexist ass. Selfishly, it'll make it easier for me to continue to enjoy the show, and I will feel that much better about the world if I can believe in one more mainstream space where funny women can thrive. But the letter entirely misses some of the valid issues that the original Jezebel post raises. What of the fact that, as Irin Carmon writes, the show hasn't taken on a new female correspondent in seven years? That female correspondents have generally "been a short-lived phenomenon" on the show? And that when it comes to television comedy as a whole, women are "universally scarce, whether in the writer's room or on the air"?

Ignoring and discounting these well-documented issues seems defensive and maybe even, dare I say, traitorous (and that's coming from someone who cringes at the word "sisterhood"). I'm not demanding a sober dissertation on the current state of women in comedy or anything -- but if "The Daily Show" has taught us anything, it's that it's possible to be both politically incisive and riotously funny. You won't find me holding the show's women to a lesser standard.