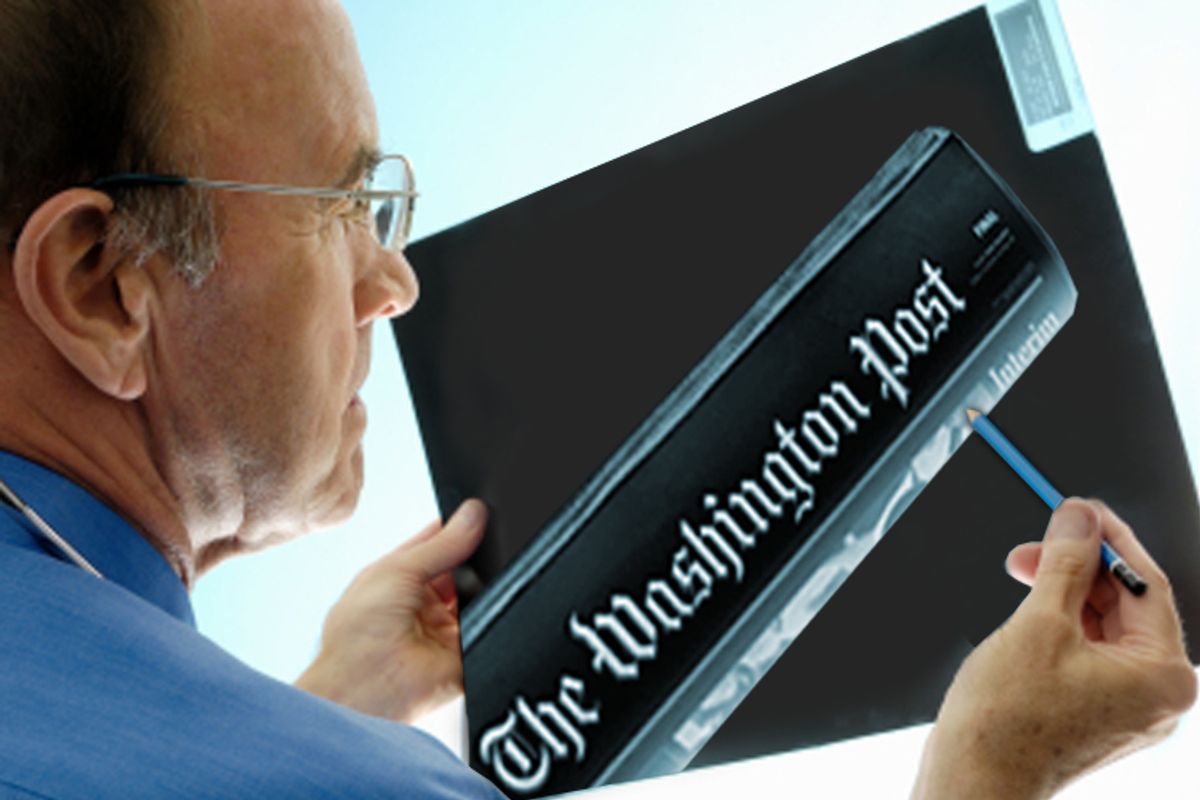 Journalists like to claim that they are devoted to transparency, but it's striking how so many of them exempt themselves and their own media outlets from those "principles."  Here are five recent, somewhat similar episodes illustrating that syndrome:

(1) On Monday, I noted that this Associated Press article twice used the word "torture" to describe what the Chinese Government did to Xue Feng, an American geologist now convicted of obtaining China's "state secrets."  AP used the word "torture" despite the fact that (a) the treatment to which the Chinese subjected him (a few cigarette burns on his arms) clearly does not meet the Bush/Cheney/John-Yoo definition of "torture," and (b) the Chinese Government vehemently denies that its treatment of prisoners rises to the level of "torture."  I very satirically demanded that AP apologize to China and cease using the word "torture" to describe what it did in light of the prevailing American media standard as articulated by the NYT's Bill Keller, The Washington Post, and NPR:  namely, that the word "torture" must not be used by Good Journalists (at least when it comes to the U.S. Government) if the abuse falls short of the Government's official definition and/or if the Government denies that what it does is "torture."  That, explained our leading media mavens, would be "taking sides," and only Bad Journalists do that.

Imagine my amazement when, several hours after I wrote that, I discovered that AP had -- with no explanation or even indication -- completely deleted the word "torture" from its article in both places where it had appeared (compare the original version to the edited version).  It's as though AP really had decided that it was being unfair to China -- "taking sides" -- by using the word "torture" to describe Chinese torture.  That discovery led to the following email exchange I had with Charles Hutzler, the AP reporter whose name appeared on the article's byline:

Mr. Hutzler - Yesterday at Salon, I wrote about your use of the word "torture" to describe what the Chinese Government did to Xue Feng. Thereafter, the AP article was edited to delete all references to "torture" (compare this to this ).

I'd like to write about this change. Can you shed any light on why this was done?

Sorry, I can't. But keep up the good fight.

He stopped responding.  Apparently, AP's policy with regard to the use of the word "torture," along with the reason for this rather striking change when it comes to reporting on the Chinese Government -- both obviously significant matters -- are not anything we can or should know about.

(2) As I noted on Monday, Time's Alex Perry angrily complained in the comment section after FAIR criticized his most recent article on the Congo.  FAIR's criticism was that Perry had concealed from his readers the central role the U.S. played in overthrowing that country's democratically elected leader and propping up the brutal tyrant who replaced him.  Perry was particularly incensed that anyone could suggest that Time would ever cater its reporting to accommodate the desires of the U.S. Government.  But Jonathan Schwarz provided documentation that Time had previously done exactly that, not just in general but with regard to how it reported on the Congo.  Schwarz's evidence (continued here) also disproved Perry's insistence that it was delusional (and even "racist") to believe the U.S. could play such a central role in Africa.  One of Perry's angriest complaints was the standard journalist-grievance that FAIR had not contacted him and given him a "right of reply" before criticizing his article.

With that last complaint in mind, I obtained Perry's email address from someone at Time.  I emailed him with a request that he comment on the evidence highlighted by Schwarz of Time's shaping its Congo coverage to the directions of government officials (evidence which directly contradicts Perry's outburst), as well as questions I had about whether he denies that the U.S. played a vital role in these events.  Perry simply ignored the email.  In other words, after vehemently attacking FAIR for not having contacted him for comment before writing its critique of his article, he now refuses to comment on the ample evidence that has emerged directly negating his claims (see Matt Taibbi for more on Perry's outburst).

(3) Last week, Iraq war supporters Jeffrey Goldberg of The Atlantic, Joe Klein of Time, and Jon Chait of The New Republic disseminated what international law professor Kevin Jon Heller explained were "deliberate misrepresentations" of my argument that virtually all aggressors (even the most brutal, such as the Germans during World War II) point to supportive minorities in the countries they invade, and that the existence of such minorities (such as Iraqi Kurds) does not justify aggressive war.  That war-cheerleading trio absurdly claimed that with this argument, I was comparing the invasion of Iraq to the Nazi conquest of Europe.  To do so, Goldberg posted this headline to a post that quoted Klein's distortions: 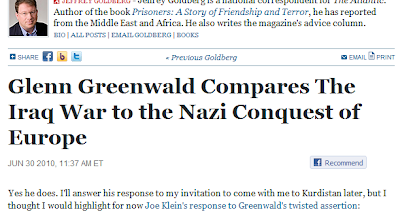 An astute reader yesterday alerted me to the fact that -- after Heller, along with numerous other commentators, pointed out how patently false that claim was -- Goldberg quietly and without comment changed his headline.  It now reads:

Goldberg changed his false headline with no indication he was doing so, no retraction, no explanation.  Worse, he left the text completely unchanged, including the long blockquote from Klein making the false accusation as well as Goldberg's endorsement of it.  As a result, Goldberg's post now makes no sense, since the first sentence that he wrote ("Yes he does") only has meaning with his original, false headline ("Glenn Greenwald compares . . . . "), but is unintelligible under his new headline.  In other words, Goldberg blared a thoroughly false accusation in his headline that was picked up in several places, then apparently changed it once he realized it was false, but without a single indication of the change or even a retraction.  Because he offered no explanation, one can only speculate about what led him to do this.  This is the same person who chides The Washington Post for failing to hire "toilet-trained" journalists.  Would any toilet-trained journalist slyly retract totally false, accusatory headlines -- long after they're first posted -- without any transparency or explanation at all?

(4) Marcy Wheeler and her commenters continue to raise numerous questions and point out all sorts of discrepancies between Wired's reports on Bradley Manning and what the government's charging documents claim.  Much of that confusion is the by-product of the extremely edited chat logs selectively released by Wired.  Despite that, Wired continues to conceal the full logs and, worse, refuses to account for the parts they will not disclose.  It seems likely, based on her quoting from the Lamo/Manning logs, that The Washington Post's Ellen Nakashima has large parts if not all of the Lamo/Manning chats as well (Nakashima is on vacation and has not responded to my email inquiries).  Certainly in the case of Wired here -- which does a lot of good journalism on other stories -- we have another instance of a journalistic outlet serving as the primary impediment for the public to know what actually took place.

(5) The New York Times' John Burns becomes the latest reporter to explain that journalists have a duty to keep things secret -- even when they are clearly a matter of public interest and not off the record -- in order to preserve the "trust" between the media and high-ranking military and political leaders.  The eagerness of journalists to find new ways to conceal, rather than expose, the secrets of the powerful seems boundless.