Yes, the hype over where he's moving is insane. But don't hate the kid from Akron, love how he's changing the game 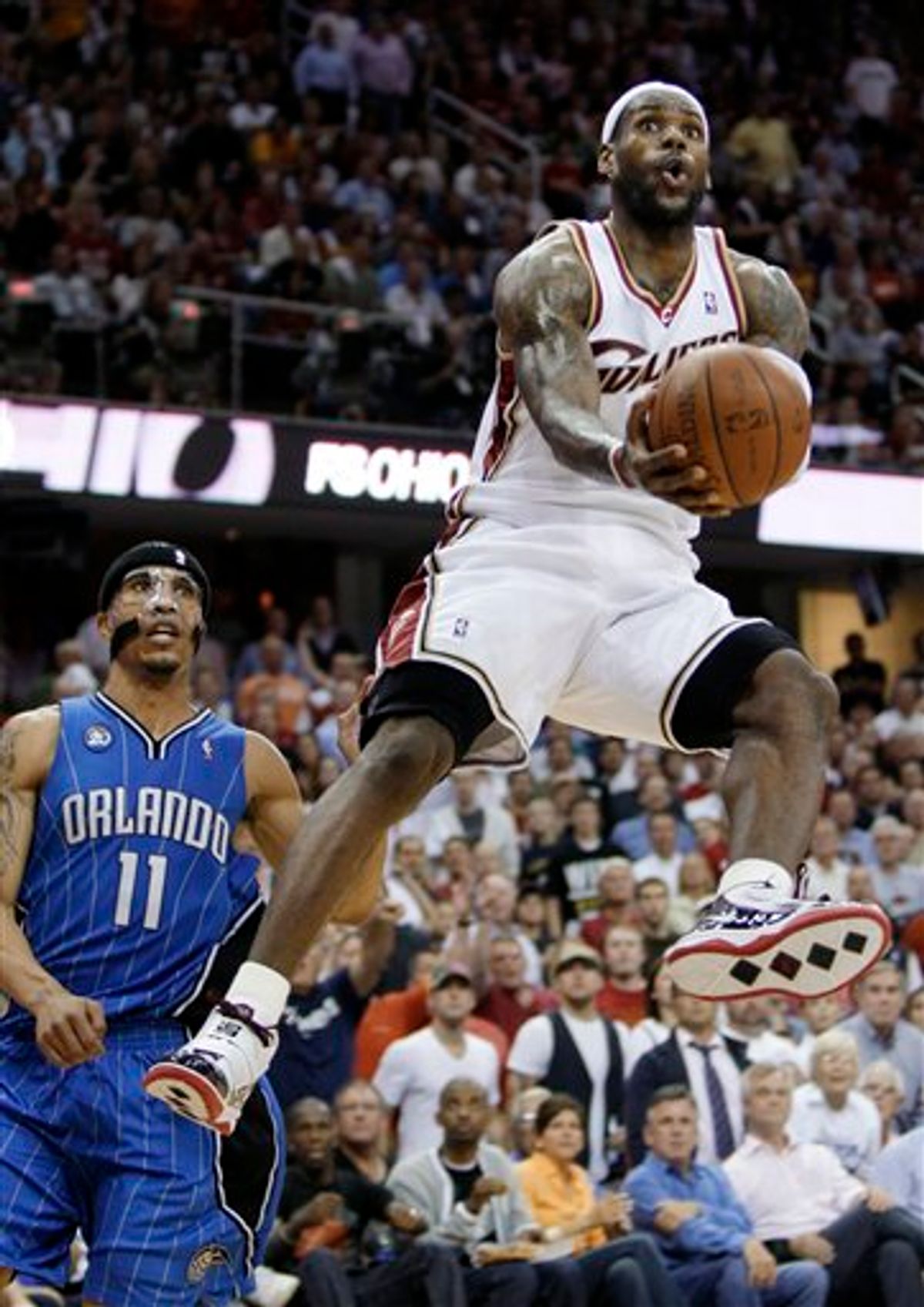 FILE - This May 28, 2009, file photo shows Cleveland Cavaliers' LeBron James getting inside Orlando Magic's Courtney Lee (11) for a shot in the third quarter of Game 5 of the NBA Eastern Conference basketball finals, in Cleveland. On Tuesday night, July 6, 2010, ESPN reported that James will announce where he'll play next season during a one-hour TV special. James' publicist is expected to release a statement later Wednesday. (AP Photo/Amy Sancetta, File) (AP)
--

Le•Bron: noun 1. A French term for the object of grizzled sports scribe envy: “That snappy LeBron thinks he’s the bee’s knees, oh he’ll get his ... dagnabbit!”

Whether you hate or love the furor over where LeBron James will end up next -- aka, ESPN’s LeBachelor, the NBA’s LeBronicles -- it’s a sports speculation spectacle for the ages. "Too much too soon" is an attribution for any LeBron misstep or missed shot. It’s a cliché, a condescending media explainer for the failings of impossibly famous black athletes. And it's also a proper lament for the digital insanity unleashed by these sweepstakes. A confluence of tweets, tips, misinformation and godforsaken salary math. It’s enough to give your iPhone an aneurysm. And unlike Apple's iPhone, the next phase is still a mystery.

Miami (probably)? Chicago? New York? New Jersey? Cleveland? How the hell did this stay secret for so long?

The story of LeBron is about a man turning his back on a supportive fan base: Obviously, I’m talking about the media. Nobody cares about Cleveland except Clevelanders, and they care with a fatalistic self-loathing of a million Louis C.K.s.

Back when his fame was embryonic, relevant media was thrilled to hype The King. Sports Illustrated even dubbed LeBron “The Chosen One” at the tender age of 17. Today, prominent hoop writers like Yahoo's Adrian Wojnarowski chafe at what LeBron’s choices have done to reporters. Bron drinks their milkshakes while sporting a shit-eating grin. What good’s a scoop when James joins Twitter? What good’s an NBA source when James fires a connected agent in favor of trusting his impenetrable cocoon of childhood friends? Wojnarowski takes the time to mock LeBron's character via oh-so-brave anonymous sources. A past moral transgressor receives fawning praise at the drop of a quote. It helps to make a reporter feel included.

James controls the message but the scriveners still have to chase him, posit possibilities from unnamed whisperers, hang on Bron’s every tweet. He has become Anthony from "The Twilight Zone." Ignore him and an editor kicks you to a cornfield's belly.

Few remember those dark days when the NBA lay by the side of the road, coughing burbling blood out its cracked mouth. In the early 2000s, ratings were down, and Allen Iverson was frightening your grandfather. NBA addicts feared for a league always at war with itself. David Halberstam portrayed pro basketball as a schizophrenic entity -- always marketing breathtaking gifts from the black community while beating back white fans' biased perceptions of that community. Michael "Republicans buy tennis shoes" Jordan had supposedly done away with the race issue. Supposedly. When M.J. left, all the criticisms about "selfish thugs" came flooding back while America tuned out.

Out of the ashes sprang the prodigy. I believe LeBron’s NBA debut to be an overlooked seminal moment in American sports history. Hoop fans were bracing for the worst -- it’s easy to forget. In retrospect, James’ greatness seems assured because we know how it went. At age 18, he waltzed into a packed arena and calmly dropped 25 points, nine assists, six rebounds. Some of you don’t follow the league, but let me stress: Stuff like this simply hadn't happened before -- not at that age. It was like watching a baby do a back flip. Interest in the NBA has swollen since.

From that moment it’s been shades of "The Truman Show" as the sports world breathlessly takes notes. Like that merely adequate flick, LeBron has taken control of his contrived existence in a way that makes its architects cringe.

It’s happening because James, though lacking a ring, is nearly bigger than the sport. Due to an economic quirk -- the NBA salary cap -- LeBron's profit production would far outweigh his salary. It’s a five-man game, so one man can hold it hostage. He may be overpaid in an abstract moral sense -- those otherworldly skills don't feed the homeless or raise foster children. But in real terms, he objectively earns while bankers are mocking our supposed meritocracy.

The free agent hoopla wouldn’t rankle if James feigned subservience to the process. Athletes are supposed to humbly visit teams during contract talks; LeBron’s suitors crawl to his doorstep and grovel like subjects before an emperor. That James has ESPN airing his decision as a reality show extravaganza is reality that some of ESPN's own writers can't countenance. I can.

Instead of puritanically deriding his ego, I come to revel in the mass attention bestowed on my quaint niche obsession. How often do we highly anticipate a nonfictional plot twist? LeBronukah has all the mystery and intrigue of Christmas, it's been great fun. Many in the basketball community are rooting for Adrian Wojnarowski to "scoop" the story from ESPN, which plans to air it tonight at 9 EDT. That would be amusing, but the real story is about how we obsessed over LeBron scooping a sport.