Conan gets revenge, while Leno, Letterman, Sheen all get snubbed after a rough year 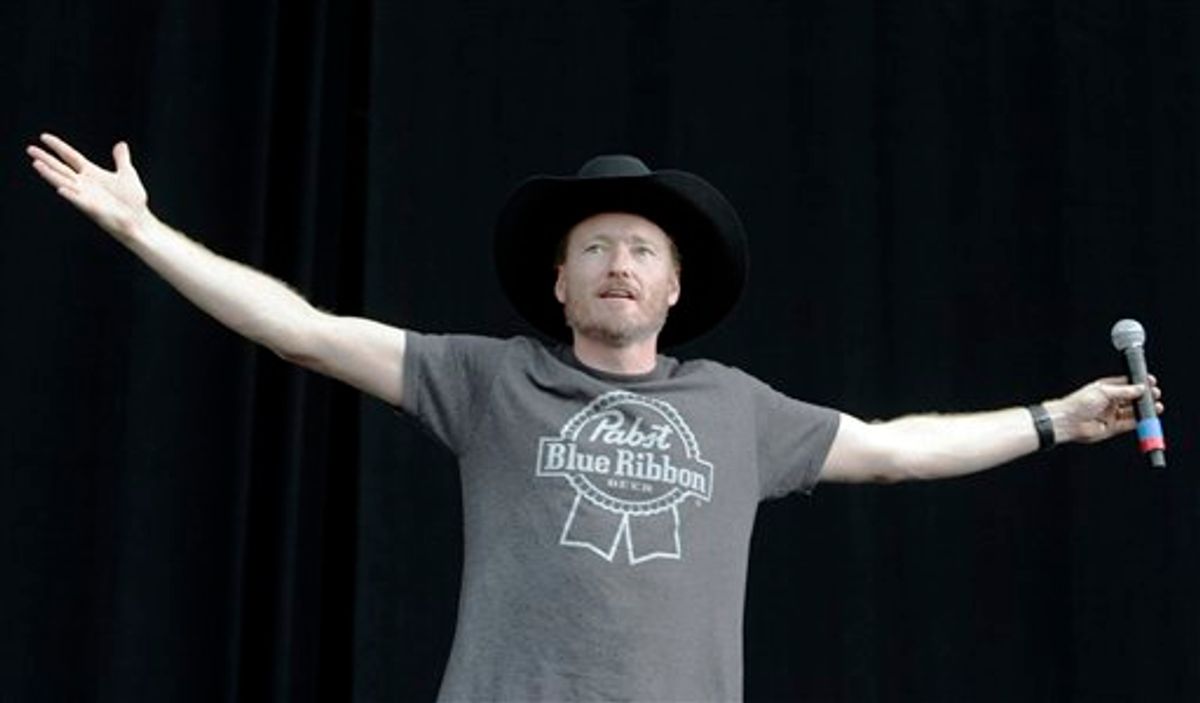 "Glee," the spunky TV musical comedy about high school misfits and the teachers who shepherd them, was a top Emmy nominee Thursday with 19 bids, including for best comedy series and stars Matthew Morrison and Lea Michele.

The leading nominee was the gritty, unsparing World War II drama, "The Pacific," with 24 nominations.

Conan O'Brien is gone from "The Tonight Show" but his short tenure as host is not forgotten: The late-night show with him at the helm nabbed a nomination as best variety, music or comedy series, while resurrected Jay Leno was snubbed in the category.

David Letterman's "Late Show" also was missing from the nominees, after a season in which the host turned an admission of affairs with female staffers and a blackmail attempt into high broadcast drama.

Out of the running for best comedy series is "Two and Half Men" and its star, Charlie Sheen, who's been charged in a domestic dispute case involving his wife. The show and Sheen have routinely been nominated in past seasons.

Besides "Glee," other newcomers receiving Emmy recognition include "Modern Family," with nods for best comedy series and for five members of its ensemble cast -- although not linchpin Ed O'Neill as the patriarch -- and "The Good Wife," a nominee for best drama and recognition for star Julianna Margulies.

The final season of "Lost" garnered nominations for best drama series and a nod for star Matthew Fox and supporting nominations for Terry O'Quinn and Michael Emerson. Elizabeth Mitchell received a guest actress bid for the drama.

"Saturday Night Live" received 12 nominations for a total 126 nominations during its run, surpassing the "ER" all-time record of 124 bids. One of the nominations went to Betty White, who at 88 proved you're never too old for comedy when she hosted the show to big ratings and applause.

White's competitors include Tina Fey, the former "Saturday Night Live" writer and star who took a break from her "30 Rock," the second-most nominated comedy with 15 bids, to return as an "SNL" host.

Fey made light Thursday of her best comedy actress nomination for "30 Rock."

"This is great and exciting news. Also, this seems like an appropriate time for me to announce to NBC that I will not be renewing my contract -- with my gym," Fey said in a statement. Of the show's best comedy series bid, she added, "We're grateful and excited. Especially since today is the fifth anniversary of the day NBC forgot to cancel us."

"Mad Men" was the most-nominated drama with 17 bids. The darkly sexy 1960s period show has been honored as best drama two years in a row. Its stars, Jon Hamm and January Jones, received acting bids.

Besides "Glee" and "Modern Family," other nominees for best comedy series include "Curb Your Enthusiasm," "Nurse Jackie," "The Office" and last year's winner, "30 Rock." The comedy has won three times in a row.

Only one other miniseries nominee, "Return to Cranford," is competing with "The Pacific," the Steven Spielberg and Tom Hanks-produced companion to their European theater WWII miniseries, "Band of Brothers."

Big names prevailed in the made-for-TV movie category. Al Pacino's performance as euthanasia advocate Dr. Jack Kevorkian in "You Don't Know Jack" and the film itself were nominated, while this year's Oscar winner Jeff Bridges was nominated for "A Dog Year."

Other film actors in the TV movie honors hunt are Dennis Quaid and Hope Davis for their portrayals of Bill and Hillary Clinton in "The Special Relationship," along with co-star Michael Sheen as British politician Tony Blair.

Besides Michele of "Glee" and Fey of "30 Rock," bids for lead actress in a comedy went to Julia Louis-Dreyfus for the canceled "The New Adventure of Old Christine," Edie Falco for "Nurse Jackie," Amy Poehler for "Parks and Recreation" and last year's winner, Toni Collette, for "The United States of Tara."

Among comedy series actors, the nominees are Jim Parsons of "The Big Bang Theory," Larry David for "Curb Your Enthusiasm," Tony Shalhoub for the last season of "Monk," Steve Carell for "The Office" and Alec Baldwin for "30 Rock." Baldwin is a two-time winner for the series.

The Emmy Awards will air Aug. 29 on NBC, with Jimmy Fallon hosting. The ceremony, which usually airs in September, was moved up to avoid a conflict with NBC's Sunday NFL broadcasts.