"The Kids Are All Right": The gay-marriage movie America needs 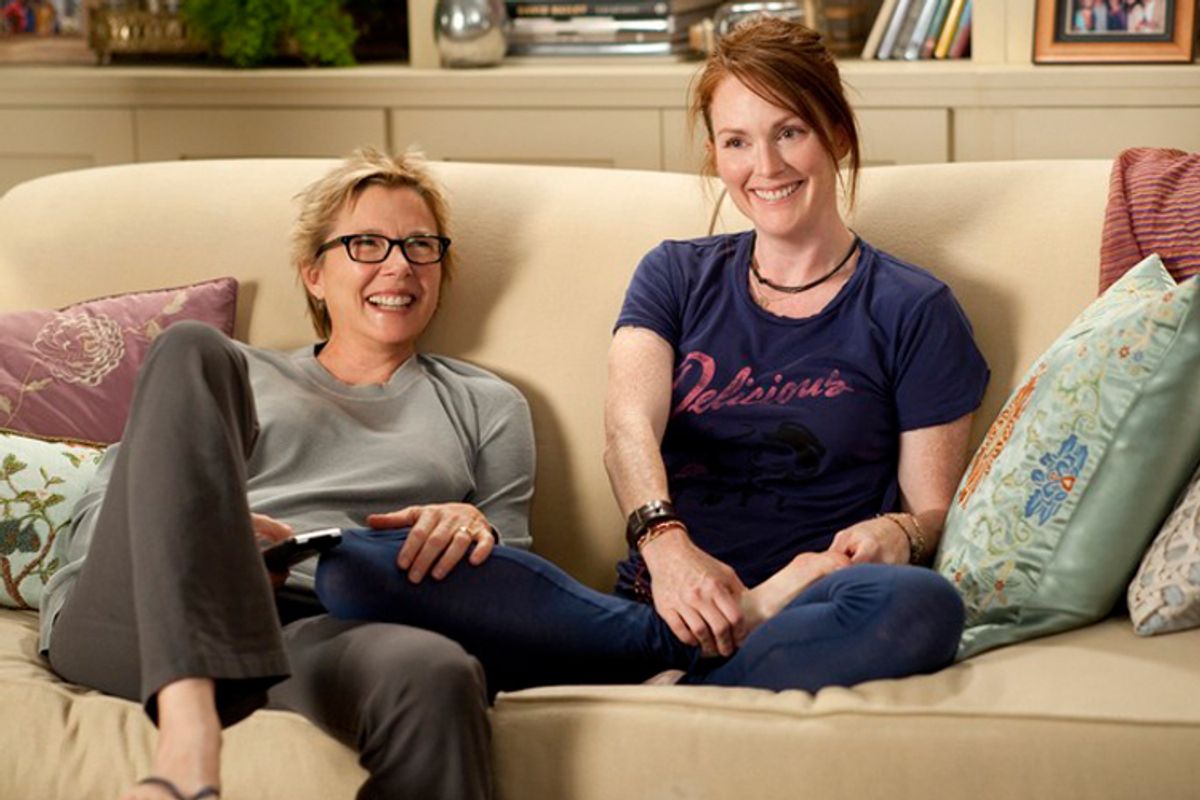 Annette Bening and Julianne Moore in "The Kids Are All Right"
--

Filmmaker Lisa Cholodenko can only hope that her lesbian-marriage comedy "The Kids Are All Right" can attract the degree of attention and animosity from the family-values right that it has already attracted from certain quarters of the lesbian and gay community. When I wrote two pieces about the film from Sundance in January, the feedback from Salon readers -- an unscientific sample, I grant you -- was strident and at least partly hostile.

By making a movie in which a pair of married lesbians are played by well-known hetero actresses Annette Bening and Julianne Moore, and in which one partner (Jules, played by Moore) has an affair with a straight man, Cholodenko and co-writer Stuart Blumberg capitulate -- in some people's view -- to a whole set of "Celluloid Closet"-type homophobic stereotypes, and possibly lend aid and comfort to the right-wing view of homosexuality as a "lifestyle choice." Furthermore, Cholodenko doesn't seem terribly concerned about it. Before our Sundance interview, I read her a few examples from the first wave of critical comments and she laughed them off: "Maybe those people need to take their pink megaphone somewhere else."

Ultimately, this might not even rise to the level of a tempest in a teapot: Lesbian and gay viewers, along with everybody else who actually sees "The Kids Are All Right," are likely to find it a sympathetic, honest and frequently hilarious film about the challenges of marriage, parenting and contemporary family life, with one highly topical twist. But if some queer-radical types object to the film on political or ideological grounds, there's a sense in which they're right to do so. This movie definitely isn't aimed at them.

In other interviews, Cholodenko has joked that she's more interested in drawing in straight male viewers than in placating every possible segment of lesbian opinion. That makes the film sound a lot more calculated and Hollywoodish than it is, but the point she's making is that "The Kids Are All Right" has a dramatic agenda but no political agenda. It's not attached to a set of talking points about gay marriage and sexual identity, it's not advocating some revolutionary artistic or social paradigm and it's not a seminar in LGBT self-esteem.

Jules and Nic (Bening's workaholic doctor character) and their teenage kids and the Peter Pan man-boy who threatens to come between them (a scene-stealing Mark Ruffalo) are flawed, selfish, fascinating characters you'll sometimes like and sometimes hate. This is one of the most compelling and rewarding portraits of a middle-class American marriage in cinema history, as well as one of the funniest. The fact that the people in this particular marriage are both women is important to the story, of course. But perhaps, Cholodenko suggests, it isn't all that important to the universe.

When I asked her how the story would be different if it were about a straight marriage, she replied: "I think in all the really important ways, it wouldn't be different. It's a portrait of a marriage, a portrait of a family, you know? It's about -- not to blow the plot -- how an affair rocks a family. When you do something like that when you're married and you have kids, you're not just doing it for yourself. You're doing it at the expense of other people who are depending on a certain kind of stability."

If anything, Cholodenko continued, her film explores questions of marital fidelity and adultery in a mode that family-values conservatives could almost embrace. If it weren't, that is, for the hot, hilarious and/or illicit sex scenes of various flavors -- always a connoisseur of awkward sex, Cholodenko has outdone herself here -- and the plot point involving what Jules and Nic's teenage son refers to as "gay man-porn." And if it weren't for the fact that God apparently decreed, somewhere or other, that you can only get married if you have complementary plumbing, and not symmetrical plumbing.

In depicting a lesbian marriage that's about as traditional as a marriage gets -- right down to the drinking, the squabbling, the cheating and the profoundly embarrassing moments in front of the kids -- Cholodenko has arguably made a more revolutionary and transgressive film than you'd see in a dozen queer-cinema festivals in lower Manhattan or the Castro District. In making a highly personal film that's deliberately crafted to reach a wide popular audience, Cholodenko may finally bust out of the indie niche that has made her career so far almost a trade secret. (Her two excellent earlier films, "Laurel Canyon" and "High Art," were limited to big-city art-house venues.)

This lesbian-mom filmmaker (Cholodenko and her partner, one-time pop musician Wendy Melvoin, have a young son) has made the gay-marriage comedy that America needs right now. Thankfully, she made it before the farcical Hollywood version that you just know is somewhere in the pipeline. With the release of "The Kids Are All Right," she's also launched this year's Oscar sweepstakes a few months early. (Foolish as it is to predict these things, I'd be shocked if this didn't garner at least a few nominations.) Here's an excerpt from my Sundance review:

Nic (Bening) is a doctor, intensely driven and controlling, who's sliding into that polite, socially acceptable, four-glasses-of-red-wine version of alcoholism. Jules (Moore) has a succession of failed careers and businesses behind her, and now Nic's bankrolling another one, an eco-conscious landscape design business. They've slightly and subtly drifted apart -- they just don't put on that secret DVD of gay male porn that much anymore! They probably don't need a direct challenge to their family stability -- and to Jules' sexuality -- but here it comes, in the person of roguish, motorcycle-riding Paul (Mark Ruffalo), who just happens to be the biological father of Nic and Jules' teenage kids.

Their eldest, Joni (Mia Wasikowska) -- yes, she's named after that Joni -- has just turned 18 and made a call to the sperm bank that yielded half her genetic code. Her younger brother, Laser (Josh Hutcherson), is actually the one who wants to meet Paul, but it's the ultra-bright, inquisitive Joni who forms a connection with him, and ends up hanging out at his organic mini-farm and restaurant, and meeting his ultra-cool African-American business partner (and occasional lover). Nic and Jules furiously resist the intruder at first -- "We're not doing a time-share on our kids during Joni's last summer at home," Nic spits -- but despite their efforts Paul becomes a tentative, adjunct member of the family.

Once Jules agrees to take on Paul's weedy, overgrown backyard as her first landscaping gig -- thrusting the two of them together for long days of Los Angeles summer sunshine -- the comic logic of the situation begins to move in an obvious direction. Beneath the easygoing surface Paul feels rootless and is drawn to Jules both physically and emotionally. She's flattered, and frankly horny, and as she says, "I keep seeing the expressions of my kids in your face." But there's nothing forced or false about what develops between Paul and Jules, and Cholodenko's definitely not interested in that story line about a hot lesbian who goes straight after a healthy dose of rogering.

I'd describe Cholodenko as an old-fashioned dramatist (in the best possible sense) whose heart and imagination are big enough for all these people. Each of the five principal characters takes a turn at the center of the story; each of them makes ferocious mistakes and must struggle to overcome them. It would be easy for her to cast Paul as the story's comic villain, the blithe, privileged, good-looking straight white guy who screws up the happy lesbian household. But Cholodenko draws out one of Ruffalo's best performances, capturing Paul as a sweet, sad Peter Pan figure whose principal sin is a sudden longing for what he can't have.

Nic and Jules were doing a fine job of screwing up their happy lesbian household before Paul's arrival, of course, but "The Kids Are All Right" ranks with the most compelling portraits of an American marriage, regardless of sexuality, in film history. Even more remarkably, it's an overwhelmingly affirmative warts-and-all portrait, not a Bergman-style descent into the pit of marital darkness. Watching two of our finest actresses playing unglamorous, flawed and complicated women is a rare privilege, and in virtually every moment and every breath of "The Kids Are All Right" we feel that Nic and Jules have created something that, damaged as it is, must be saved.

Cholodenko says she and Blumberg were well aware that building the plot around Jules' affair with Paul, and thereby invoking the superstition that lesbians all secretly yearn for cock, might piss off some folks in her own constituency. It was central to her conception of the movie, not to mention her personal ideas about sexual identity and married life, so she went ahead and nailed herself in the coffin, as she jokes. "Look, I'm so glad this film will have a commercial life," she told me. "I think it deserves it. But it's still an auteur film. I'm not trying to please a studio. I'm just writing it from my heart. It wasn't contrived. It wasn't a conceit. It wasn't somebody else's fantasy.

"This seems true for me and for people I know. I see sexuality as much more fluid. I believe people can have sexual desire for people of the opposite sex and the same sex, but that emotionally they can be whatever, homosexual or heterosexual. There are people who see sexual identity as bound forever, and that there's no continuum at all. I find that thinking, and the critique that comes from that, really dated."

"The Kids Are All Right" opens July 9 in New York, Chicago, Los Angeles and San Francisco, with wider national release to follow.