The so-called angriest man in the world spawned an underground sensation. Now he's ready to tell his story 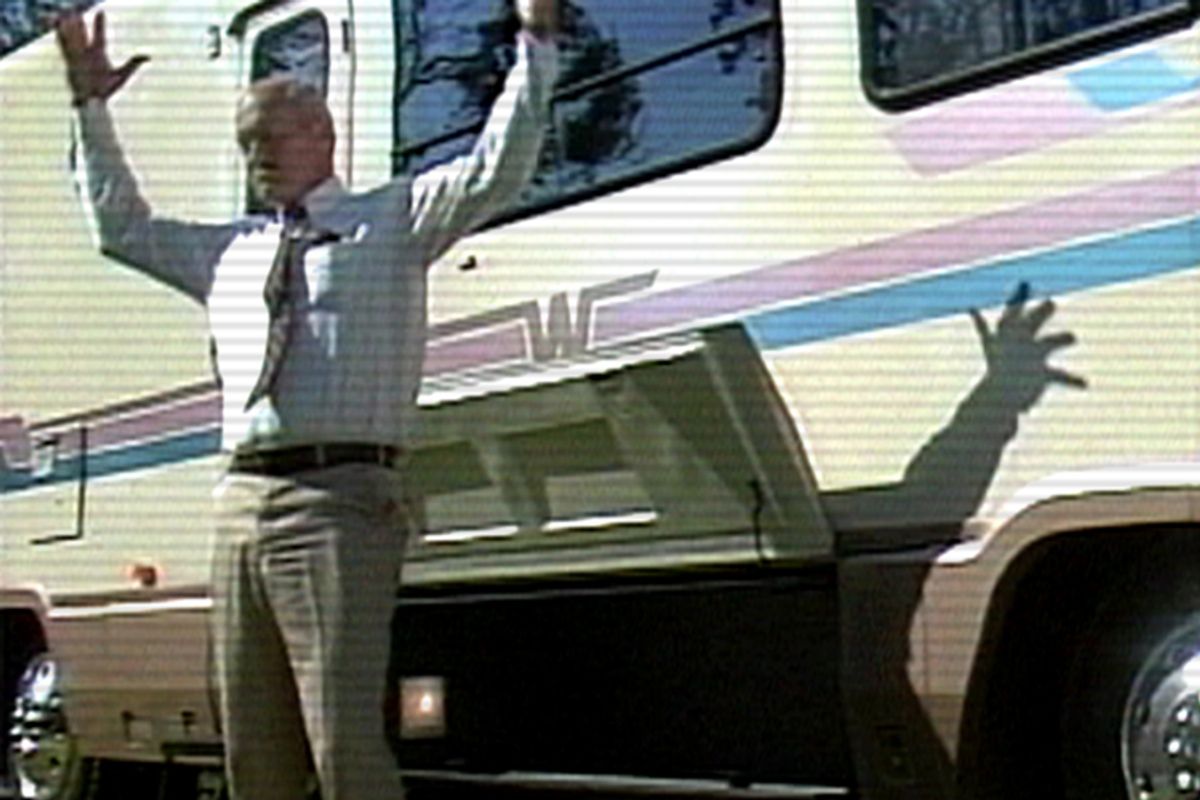 You know him, even if you don’t know his name. A balding, middle-aged man in a white dress shirt and khakis slides calmly from behind the wheel of a Winnebago and steps into the cabin, extolling the R.V.’s virtues in the confident tones of a seasoned pitchman before his practiced spiel drifts into an existential quandary: "The Winnebago concepts and engineering departments have developed a multi-functional bathroom, privacy I don’t even know what the fuck I’m reading."

For the next four minutes (or more, depending on which of several permutations you’re watching), Jack Rebney spews a string of profanities and verbal abuse as he flubs lines, forgets dialogue and fights flies, his apoplexy rising with each aborted take. His frustrations grow and multiply, until he seems to be on the verge of a violent outburst or a nervous breakdown, possibly both.

For decades, Rebney’s notoriety was confined to the realm of bootleg video. Evidently cobbled together from the outtakes of an industrial shoot, the "Winnebago Man" clips were a mainstay of the tape-trading underground of the '80s and '90s, passed from hand to hand via crude VHS dubs. By the time it reached you, either as a free-standing entity or on a handmade compilation that might also include Orson Welles’ drunken outtakes from a Paul Masson wine commercial or a young man playing flawless air drums to the entirety of Metallica’s "Sad But True," the image had been warped and smeared to the extent that the central figure’s face was largely obscured, reduced to a fleshy blur atop a wildly gesticulating body. The idea that there might be more to the man than his impressively short fuse might never have occurred to you, any more than you’d wonder about the home life of Mr. Whipple.

But with the advent of YouTube in 2005, Jack Rebney went global. His synopsized dark night of the soul found its way onto the screens of office workers looking for a respite from a particularly grueling day, and his audience grew from tens of thousands to tens of millions. In Austin, Texas, documentary filmmaker Ben Steinbauer watched as the videotape he and his friends had viewed every night for a year became a worldwide phenomenon. And he wondered: Who was Jack Rebney? And did he know he was famous?

Steinbauer’s curiosity bore fruit in "Winnebago Man," his first documentary feature, which opens in New York this week and around the country throughout the summer. Tracking down Rebney proved to be no easy task. But Steinbauer found him, living on a mountain in California, and spends much of the film trying to get Rebney to reckon with his unsought celebrity, which Rebney had only recently become aware of.

"To me, what became really interesting was the idea that it was entirely possible for the man in the 'Winnebago Man' clip to not have known about the outtakes until that time," Steinbauer says. "At the time that clip was filmed and produced, he could have just moved to the next state over and nobody would have known anything about it. But with these new viral videos, it became something you couldn’t shake. If I walk out in the street right now and somebody hits me in the nuts with a football, and that’s captured on a surveillance camera and it’s shot the right way to make it funny and that gets uploaded, I’m forever going to be known as the guy who got whacked in the nuts with a football."

Some versions of the "Winnebago" clip labeled Rebney "the angriest man in the world," a tag he attempts to dispel by putting on a good-natured act for Steinbauer during their first on-camera encounter. But Rebney soon decides that he’d rather be known for who he is: a former CBS news producer who wound up shooting promotional videos for Winnebago on a particularly sweltering summer day.

These days, Rebney prefers to direct his anger at the depredations of Bush and Cheney, but he’s embraced his viral-video reputation. On the phone, he answers opening pleasantries with a tongue-in-cheek tirade: "I am old and blind and decrepit and mean and miserable and disconsolate -- you can add anything you like after that."

With his sonorous voice and clipped consonants, Rebney sounds like an old-school anchorman; part of what makes the clip so fascinating is the disparity between his lordly manner and his mounting rage. At one point, he rails against the pretensions of his own script. "Accouterments," he says, pronouncing it à la française, "what is that shit?"

Rebney’s anger is directed mainly at himself, but the clip is rife with indicators of behind-the-scenes tension; when a sweat-drenched Rebney asks for a towel, one whips into the frame and lands squarely at his feet. In "Winnebago Man," Steinbauer tracks down the crew who worked on the original shoot, who reveal that the foul-mouthed highlight reel was produced with the intent of getting Rebney fired -- a fact worth figuring in the next time you’re tempted to take vicarious pleasure in Rebney’s misfortunes.

According to Rebney, his relationship with Winnebago ended via a "mutuality of agreement," stemming from the fact that he’d simply shot everything there was to shoot. But he allows that he rubbed more than a few of his co-workers the wrong way. "By that time, the majority of people that were employees of the Winnebago corporation had decided that I was about the most hardhearted, mean, miserable man that had ever existed," he says. "They didn’t like me, and the reason was that I demanded that it had to be as good as it could possibly be, that is to say as good as I could make it. It was totally irrelevant what they did, what they said, et cetera. I knew exactly what I wanted and I wanted it my way. I’ve suffered from that malady all my life."

Not surprisingly, Rebney doesn’t think much of modern culture. He’d rather be reading David Hume or Dostoevsky than surfing the net. When Steinbauer asks if he understands why so many millions have viewed the clip, he draws a blank. "Why they’d watch a video like that is something I’ll never know," he says. But now that Rebney has had a chance to meet his admirers face to face, he thinks he understands.

"They’re moved," he says. "They see clearly a reflection of themselves, what they could be, might have been, or for that matter don’t want to be. I think it reaches them on a very visceral level. And, I can say this with impunity, I am a very visceral person. There is nothing in this film, there is nothing in the clip, none of it is anything except exactly who I am."

To be sure, there are those for whom the "Winnebago Man" clip is merely a goof, a diverting time-waster to be bookmarked alongside "Chocolate Rain." But there is something oddly moving about it, a sense of naiveté that comes further into focus as you watch and rewatch it. It dates from an era before every misstep could be filmed and broadcast, before public humiliation became the coin of the realm. It’s not the first thing that comes to mind as you watch Jack Rebney curse a blue streak, but for all his vituperation, one of the most striking things about the clips is its innocence.