His TV-special betrayal of Cleveland fans showed sports for the ugly, cynical business it is 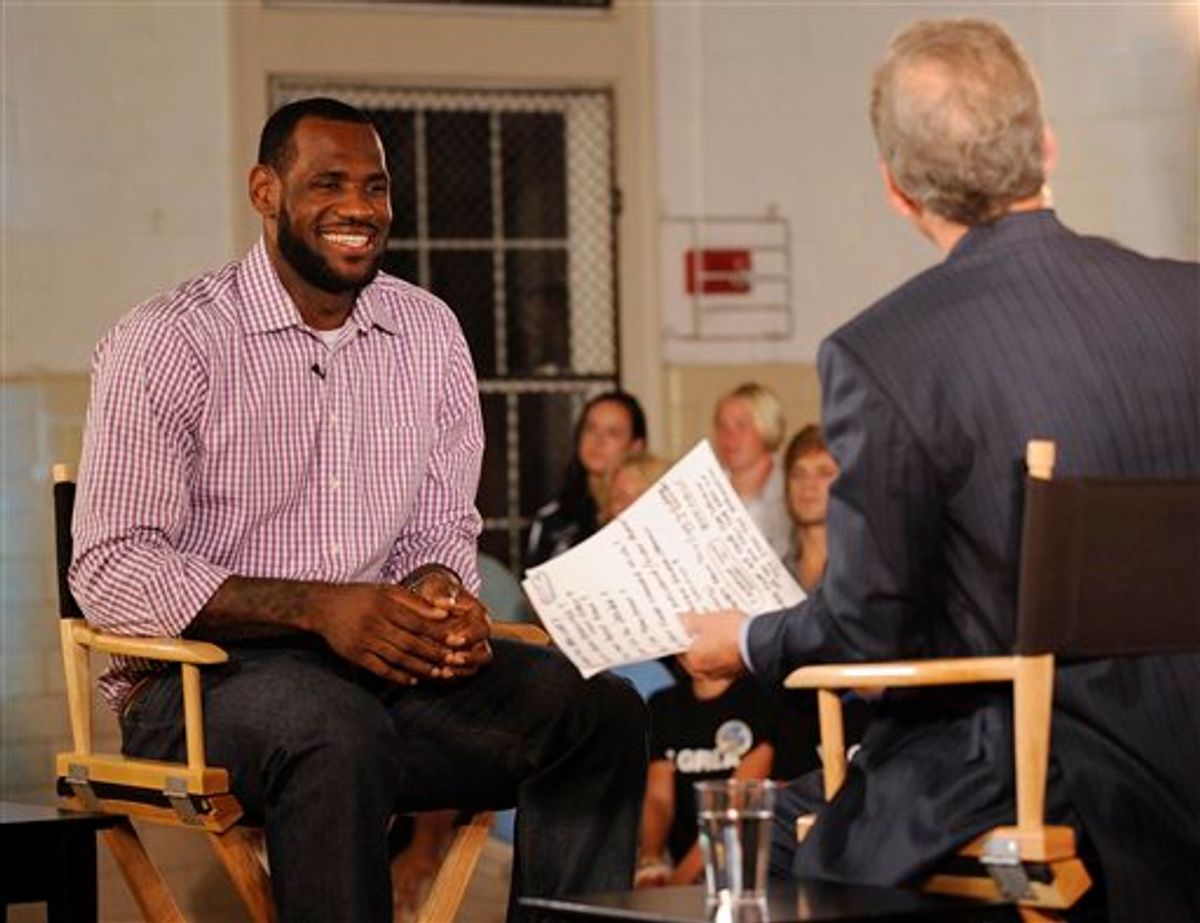 In a photo provided by ESPN, LeBron James sits with Jim Gray before an interview on ESPN on Thursday, July 8, 2010, in Greenwich, Conn. James said that he's decided to join the Miami Heat and leave the Cleveland Cavaliers after an unsuccessful seven-year quest for the championship he covets. (AP Photo/ESPN, Rich Arden) NO SALES (AP)
--

Sports haters, you're right. You've always been right. Before LeBron James' televised "Decision" last night about where he'd sign as a free agent, I had a response to those who responded to sports talk with a "who cares?" Sports are a microcosm of life. They give us a template for collective experience. "There's value in the trivial," I would bleat.

Not anymore. There's nothing of value here. If sports are revealing of culture, then I hate our dumb, callous, corporate guts. This is all a cynical exercise in futility. We as fans are choosing to live vicariously through people who quite possibly hate us, or at least wouldn't mind manipulating us for a better TV rating. In the run-up to LeBron's announcement that he would leave his hometown Cleveland Cavaliers to play for the Miami Heat, I defended every sordid aspect of the exercise as great theater. The free agent hype was like the unveiling of a new Apple product or Harry Potter book. Detractors were merely stuck in the throes of humorless jealousy.

Now, as a devoted NBA-booster and LeBron James fan, I feel taken for a ride. A man's obsessed-over decision to wear different garb when he throws a ball into a ring was expressed in such a way as to make the absurdity of that situation manifest.

Miami and Cleveland sport similar colors, but LeBron James really exchanged gray skies for blue. He will abandon his hometown fans for a glitzier situation -- because he can. LeBron probably never cared about them in the first place. And if he never cared about them, then why do I care about LeBron, athletes or sports in general?

"I don't see it as leaving Cleveland," he said. "It's about joining forces with other guys"

Of course he didn't see it as leaving, or hurting, Cleveland. Why would he? Ohioans' love for him was conditional, desperate and creepy. For LeBron James, the expression of that adoration was the experience of walking into Quicken Loans Arena and getting deliriously screamed at. If the same people who embrace you one day burn your jersey the next, then of what importance was that love? Cleveland fans are mad at him because he will now throw balls into hoops for a collection of strangers who wear a different logo. Their loyalty was empty, stupid and sad.

Sports as a business survives because it's more than a business. For the jerseys to fly off shelves, people need to feel as though they're part of an almost religious experience. When LeBron James exits his hometown amid a manipulative, crass display of pageantry, sports feels more like a cult of self-hatred than a standard business.

James spoke before a strategically placed VitaWater vending machine -- this awfulness was sponsored by the producers of that faux-healthy neon alien sweat. The VitaWater people adorn their product with a "Pursuit of Happiness" slogan, which I've always found ridiculous. As I snickered at the screen-hogging machine, I felt as though I'd pursued masochism. Last night and forever.