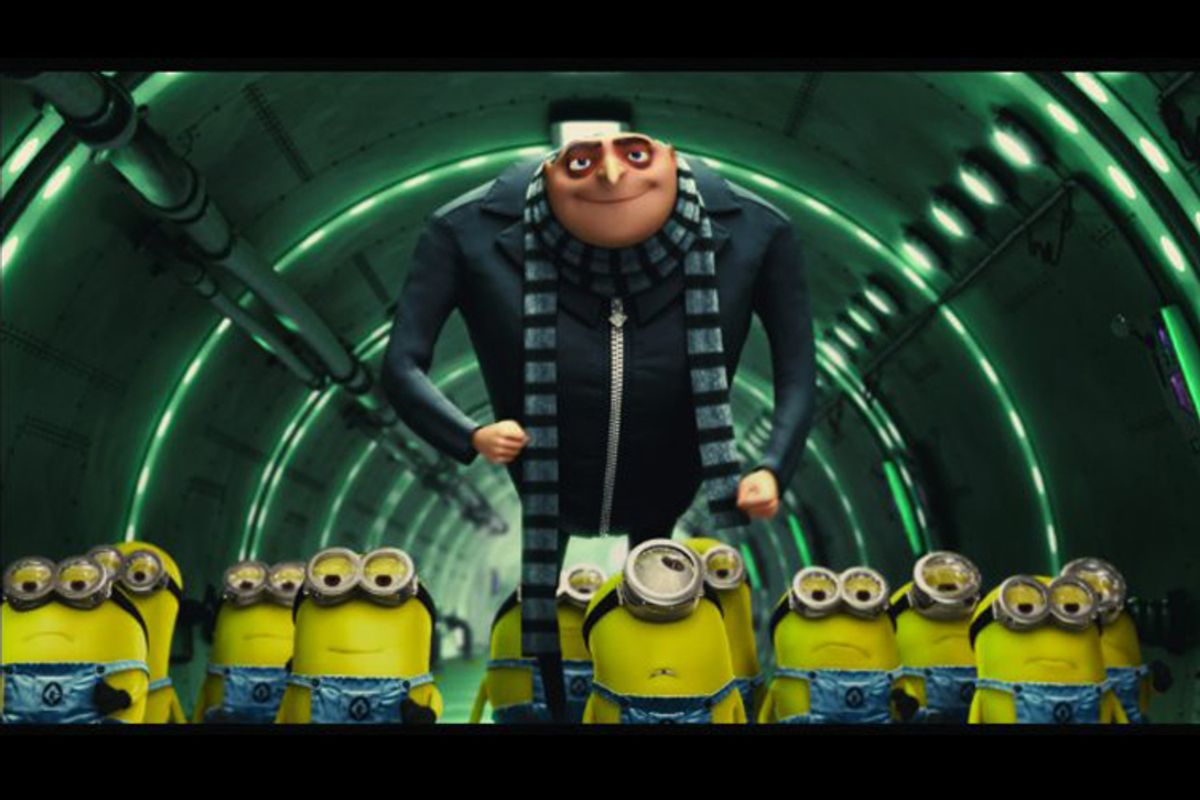 A still from "Despicable Me"
--

Presumably the under-12 target audience for "Despicable Me" -- which is likely to come away thoroughly delighted -- will not know or care that its lovably villainous hero, a long-nosed, Russian-accented ogre named Gru, is voiced by a famous comedian who just walked away from TV's most adored sitcom. But even if Steve Carell's turn in "Despicable Me" and his departure from "The Office" are linked only by coincidence, this irresistible animated surprise kicks off his career as a movie star in auspicious fashion.

An enjoyable blend of sweetness and silliness, with loads of giggles and just enough dark-edged humor to keep the adult companions interested (the Bank of Evil, where Gru seeks financing for his schemes, carries a small-print legend above its grandiose portals: "Formerly Lehman Brothers"), "Despicable Me" ranks as the second-best digital-animated family film of the summer. But when the gold medal belongs to "Toy Story 3," there's no shame in that. And unlike every other 3-D film I've seen since "Avatar," this one actually uses the technology with grace, daring and a sense of wonder. After the disgraceful gray smear of "The Last Airbender," that's wonderful to see. (Unlike that film, and "Alice in Wonderland," and 2010's other "up-converted" films, this one was actually made in 3-D, and the difference is obvious.)

Improbably enough, "Despicable Me" ought to make Universal Pictures an instant player in the realm of family-oriented digital animation, up till now dominated by Pixar and DreamWorks. Mind you, Universal didn't actually produce this film, but in French animators Pierre Coffin and Chris Renaud and their fledgling Illumination Entertainment studio, they picked the right subcontractor. If Coffin and Renaud's images don't possess the fanatical level of detail and nuance found in Pixar's films, they're clear, brightly colored and often very funny. I'll never think of the oodgy, slimy Squid Gun, a weapon pioneered by Vector (Jason Segel), Gru's irritating, über-nerd rival, without chortling.

Furthermore, while "Despicable Me" doesn't even try for the complicated emotional tone and quasi-Proustian yearning of "Toy Story 3," its quotient of pure fun is at least as high. There isn't much doubt, right from the beginning of "Despicable Me," that Gru's evilness is highly exaggerated. He's far too kind to his army of Minions, cute little yellow guys who look like a cross between light bulbs and cough drops, and far too frightened of his own pet, which is never identified but looks something like a furry, terrestrial version of one of those scary, toothy, deep-water fishes. Needless to say, when a trio of orphan girls turns up on his doorstep hawking cookies (their ringleader, preteen Margo, is voiced by Miranda Cosgrove), Gru is absolutely petrified.

It turns out, however that the girls and their baked goods may offer Gru a way into the impregnable fortress of Vector, the spoiled and pompous new-school villain who's driving old-line entrepreneurs like Gru out of business. There's a nonsensical story going on here about Gru and Vector's rival plans to shrink the moon and steal it -- Vector's already got the Great Pyramid of Giza in his yard, painted blue to blend in with the sky -- but all of that's just an enormous MacGuffin. The real story, of course, is about Gru's not-so-stony heart turning to mush as his utterly cynical adoption of the spunky gals turns into the real thing.

Carell gets a lot of help from Ken Daurio's consistently amusing script, but he brings tremendous complexity to a character who could easily have been a one-note, Boris-vs.-Bullwinkle gag. Gru constantly marvels at the insipid and hackneyed nature of parental love, but marvels even more at his own inability to resist it. When coerced into reading the girls one of those board books where you stick three fingers into little puppets, to become kittens drinking their milk or brushing their fur or whatever, he exclaims: "This is garbage! You like this?" But by the end of the movie, after the girls and Minions have helped him through a ludicrous lunar showdown with Vector, Gru has written his own icky-cute board book, and a hugely sweet "aww" moment it is too.

Along with Segel as the immensely smug Victor -- who gets what's coming to him, don't you worry -- "Despicable Me" also features Russell Brand, Kirsten Wiig and Julie Andrews (!) in relatively low-impact roles. You can argue that all this movie does is remix a bunch of familiar themes, tropes and gags from other family-oriented films. But Coffin and Renaud's execution is fresh, sincere, often lovely and a great deal of fun -- and in this kind of movie, and this kind of movie summer, execution is everything.