Referees suck! And other lessons of the World Cup

As Spain and the Netherlands prepare to throw down, we offer lessons from a thousand hours spent on the couch 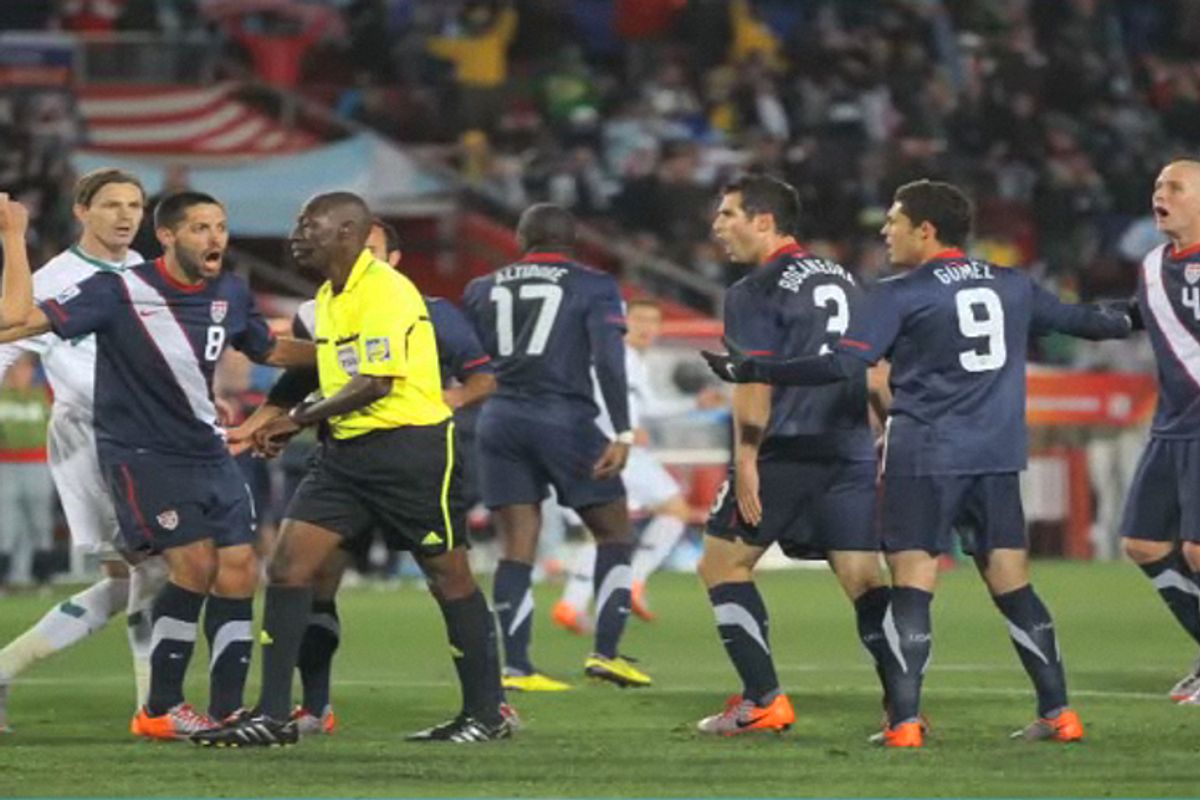 U.S. players protest a referee's call during their match against Slovenia at the World Cup on June 18.
--

I confess (rather joyfully) to being one of those annoying, hardcore soccer fans who loves the World Cup whether or not the United States is still playing.

Don't worry, though. I'm not going to bore you with another paean to the poetics of the Beautiful Game. If you can't see them, or don't care to, that just means more room on the couch for me.

But I do think it's worth summing up what we learned from this year's Cup, which amounts to the world's largest sporting event, and which culminates Sunday with a contest between Spain and the Netherlands.

The last time the Spanish and the Dutch fought a battle this big was in the 1580s, when William of Orange bucked the rule of King Philip II of Spain, an act that essentially paved the way for Dutch independence. OK, so it's not exactly a grudge match with a lot of recent history. But that doesn't mean it won't be great.

Throughout the course of the Cup, I kept trying to figure out why I found watching the games so relaxing. And yes, part of it was the natural flow of the game, its spontaneous grace. But a lot of it was simply the absence of commercials.

You get used to the abuse, after a while. Crucial neurological receptors burn out, or fade away. And the marketing people know this, and so they keep pushing the envelope. They get more and more sophisticated in their emotional manipulations. The budgets explode. The CGI geeks run wild. At a certain point, you find yourself chewing on your Nikes and gargling with ice-cold Coke Zero and snorting McNuggets.

So yeah, it's been kind of a revelation to watch the Cup, to know that 90 or more minutes of the two hours I spend in front of the TV will be spent watching, you know, the game. I'm sure the Dark Overlords of Finance eventually will find some way to more fully monetize soccer. But for the moment, the fans win.

Lesson No. 2: The Refs Totally Screwed the Pooch

I'm not just talking about the phantom call that cost the United States a goal against Slovenia, and a thrilling comeback. There were, by my count, at least a dozen howlers in this Cup.

Lots of angry ink has been spilled about the non-goal scored by England's Frank Lampard against Germany. His shot, which would have knotted the game at two, hit the crossbar and bounced nearly a yard behind the goal line. The English subsequently crumbled. The same fate befell the Mexicans, a few hours later. Argentina's Carlos Tevez scored a goal, despite being embarrassingly offside. The Mexicans melted down.

Because there are so few goals scored in soccer, a bad call often means the difference between a win and a loss. Ask the Italians. The defending champs were eliminated from the tourney after Fabio Quagliarella's lovely equalizer against Slovakia was discounted, on a bogus offside call.

The obvious risk here is that using instant replay will interrupt the flow of the game I was just celebrating. But with the right technology in place, most of these calls would take less than a minute to get right.

Look: It's nothing against the referees. Those guys do more running in one match than I'll do in my lifetime. But it's simply impossible for a staff of three dudes to get every call right from 30 yards away, with a thicket of players all around the ball, half of them faking injuries, and the other half bellowing for justice.

You hear this chestnut a lot in the pop-psychology vernacular of sports. But this year's Cup served as a potent reminder. The teams that underperformed -- hey, France, I'm talking to you -- were the ones that couldn't handle adversity.

This loss of poise was obvious, even to folks who know nothing about soccer. The mighty Brazilians unraveled in the second half, after thoroughly dominating the Dutch in the first half of their quarterfinal match. The culprit was an own goal, followed by a defensive lapse that put them down 2-1.

They began sniping at each other. Then one of their best defensive players -- the same poor fellow who had caused the own goal, not incidentally -- cleated a fallen Dutch player, and was sent off, leaving them with 10 men, and virtually no hope of winning.

There's no doubt that the Brazilians were more talented than the Dutch. But it's not about talent, even at the World Cup. It's about composure, and cohesion.

The French -- finalists four years earlier -- never even made it out of Group Play, because they were too busy feuding with each other and their coach. Au revoir, les enfants.

Lesson No. 4: The World Cup Should Be Held Every Two Years

So why not give the people what they want? Why make them wait four years? Why not hold the Cup in countries -- like South Africa -- that can use the tournament as an engine for economic development? (To be clear: I'm not advocating that impoverished countries go into hawk to throw a party. No one needs that.)

But as long as we're going to be staging these global convocations, why not stage the ones people truly enjoy?

It's not just that soccer isn't violent enough for our tastes (though it isn't), or that there isn't enough scoring (though there isn't). It's that the game is ultimately too diffuse for the American psyche. It's not structured enough. Played properly, soccer is a series of improvs, of strung-together riffs. There is no predictable pattern of building drama. The deciding goal might come in the fourth minute, on an epic header, or in the 104th minute, on a boneheaded own goal. Either way, there's no warning.

And thus, you have to be paying attention at all times, not lost in a haze of distraction. And you have to be willing to take pleasure in the process of the game, not just the outcome.

I'm sure I'll catch all kinds of crap for saying this, but the basic American attitude, one reinforced by our slavish devotion to consumerism, stresses instant gratification above all else.

Like our sneakers and breath mints, we require our athletes to come at us fast and hard and on time. We need from them moments we can't possibly miss, even if we're texting at the same time. And it's not just sports. Hell, even our reality TV shows are staged to provide us comforting jolts of outrage and schadenfreude.

So soccer, with its jazzy subtleties, doesn't stand a chance. Sure, every four years we'll all get a hard-on for the game, and spend two weeks in its strangely European thrall. Then the U.S. will lose, and we'll click back to our regular programming.

And then, as they generally do, the rest of the world will be left to watch without us.

Steve Almond is the author of "Rock and Roll Will Save Your Life."