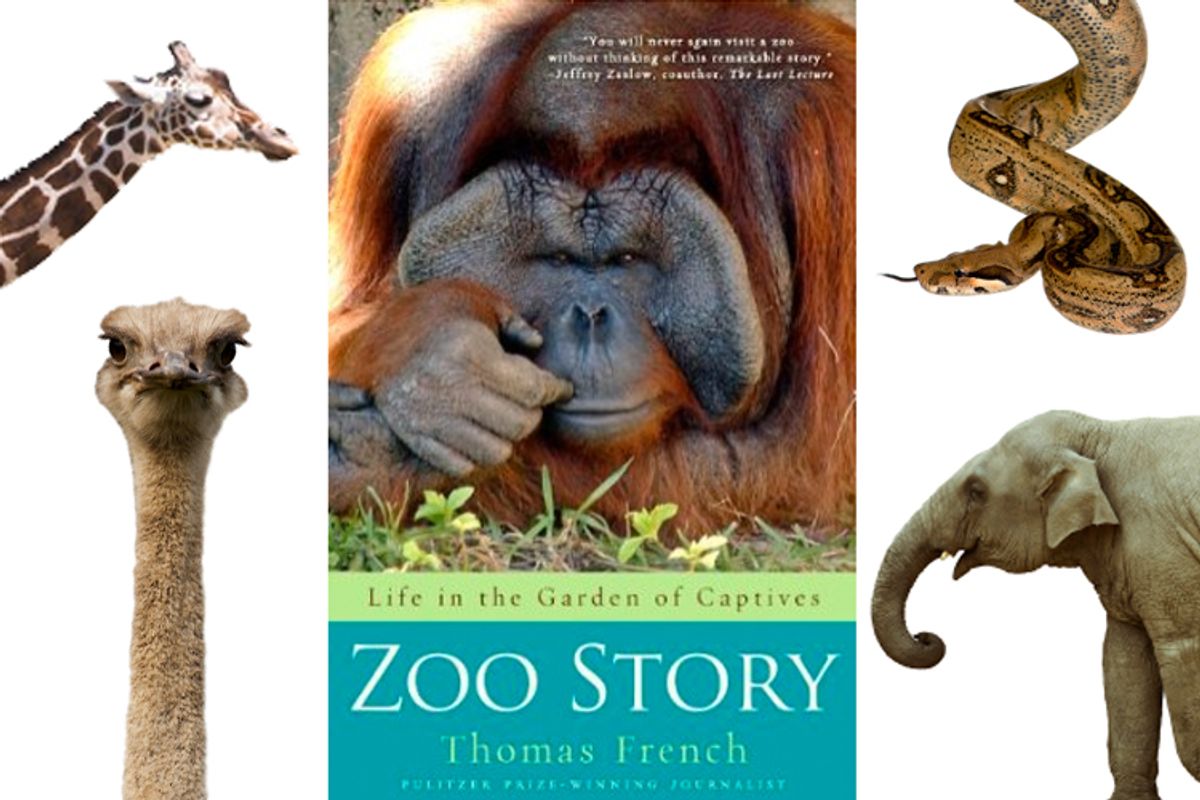 In 2003, a game reserve in Swaziland sent 11 African elephants to a zoo in Florida that had, only decades earlier, been declared one of the five worst zoos in America by the National Humane Society. The elephants came a long way, via Boeing 747 and with judicious doses of tranquilizers and vigilant bedpan monitoring -- a necessity since elephant urine can eat through metal, one of the many interesting facts to be found in "Zoo Story: Life and Death in the Garden of Captives" by Thomas French. Lowry Park, in Tampa, had already come a long way itself by 2003, thanks in large part to the leadership of Lex Salisbury, the zoo's CEO and the mastermind behind the importation of the elephants.

"Zoo Story" unfolds over the course of six years, and while it lures you in with the elephants (and tigers and chimps), it's Salisbury who really sets the hook. Despite a tempest of animal-rights protests surrounding the elephants' sale to Lowry Park, the wild creatures seemed to settle in pretty well. Salisbury, however, enjoys an apotheosis and suffers a downfall, a story entailing mutinous zookeepers, the tragic death of one of the zoo's residents by Salisbury's own hand, a wife's thoughtless mistake, shady business dealings, and the most irresistible news hook of all time: runaway monkeys.

French makes a conscientious attempt to address the ethical snarls of zookeeping -- a practice that many animal-rights activists would prefer to see entirely eliminated but also the only means of survival for some endangered species. Zoos are, he writes, the ironic manifestation of our "wish to love and protect other species even as we scorched their forests and poisoned their rivers and shoved them toward oblivion." He never presents zoos as an unqualified good, but given that the book's impressively intensive reporting required him to spend countless hours hanging out with the zoo's staff and describing events from their point of view, that's where the sympathies of "Zoo Story" gravitate. French quotes from statements issued by anti-zoo factions, but did not, apparently, interview them, so they come across as distant hecklers, jeering from far beyond the margins of the main events.

The book originated as a series of feature articles for the St. Petersburg Times, and it must be said that French's style here never rises above the workmanly, meat-and-potatoes standard of the daily newspaper. On the other hand, it's also blessedly free of the padding so often found in more "writerly" and less journalistic nonfiction books; there's no potted history of zoos and no labored effort to incorporate the author's "personal story" into the narrative -- even though the acknowledgments reveal that, when he started reporting on the zoo, French was afraid of animals.

All the artistry in "Zoo Story" comes in the form of scene-setting and storytelling, at which French most certainly excels. He sketches the difficult history of the zoo's longest resident, a chimpanzee named Herman who was rescued from animal dealers in Liberia and raised as the doted-upon third "child" in the family of an American mining executive. Chimps are fantastically strong for their size and unpredictably aggressive, so the family finally had to send him out of the house. Lowry Park was the closest zoo, and Herman's human "father" visited him there regularly, but the love lavished on the ape was an ambiguous gift. It left this miniature King Kong sexually fixated on human females (he liked blondes with bare shoulders, and raged at any man who touched the woman keepers he regarded as "his") and uninterested in breeding with his own kind.

Nevertheless, Herman appears in "Zoo Story" as the good alpha male, a sensitive diplomat adept at calming the histrionics that regularly flared among Lowry Park's chimps. (One primatologist characterizes the animals as "drama queens.") He stayed by the side of a baby who got his head stuck in some netting and took the group's most vulnerable and picked-upon member under his wing. So when, in the course of "Zoo Story," Herman falls prey to the Borgia-like scheming of the alpha female, it comes as a palpable shock.

In counterpoint to Herman, there's Lex Salisbury, basted with seemingly every cliché known to business journalism. He's a "hard-driving" visionary who can be "hell on the minions who toil beneath," who likes to "make his own rules" and flaunts a "larger than life" image involving a safari hat and a cheesy nickname -- El Diablo Blanco. French ponders the conundrum of Salisbury, who unquestionably pushed Lowry Park into the upper echelon of American zoos, but who eventually managed to alienate almost everyone who worked for him. His relentless ambition and self-confidence accomplished much, but it also led him to think he could get away with setting up a for-profit animal park on the side and with allowing that project to become hopelessly entangled with the not-for-profit Lowry Park zoo.

Salisbury's rise and fall would be a rich saga even if it didn't involve him taking up a shotgun to deal with the results of an inexperienced keeper's mistake. (The experienced keepers had mostly quit, protesting poor working conditions, an emphasis on commercialism over conservation and Salisbury's unrelenting demands for greater productivity.) Fate handed French (and Salisbury's critics) a precious gift, however, when in 2008, the CEO made a major error of his own by placing 15 patas monkeys on a moat-enclosed island in his pet project, Safari Wild. Salisbury hadn't taken into account two key facts: 1) Patas monkeys can swim and 2) they're "officially the fastest monkeys on Earth." The monkeys staged a jail break and for eight months roamed the greater Tampa area at will, stealing food, killing the batteries in tractors by playing with their switches all night and generally making Salisbury look foolish.

Likening the behavior of human alpha males to their animal counterparts is a bit of a gimme at this stage, but comparing and contrasting the nurturing leadership of Herman to the dictatorship of Salisbury -- something French does with admirable lightness -- is inspired. It's also sobering to watch young zookeepers, filled with winning enthusiasm and camaraderie, being ground down by the human world's equivalent of evolutionary pressure. "At the zoo," French writes, "every day was another lesson on living in a world where there were no more pure choices." And you don't even need to look in the cages to see that.

Referenced in this article: Thomas French's series of feature articles on the Lowry Park Zoo can be found on the St. Petersburg Times' website.

Books Noble Beasts Nonfiction Our Picks What To Read