The race between the worst candidates ever

Two scoundrels, one seat: It's a shame someone has to win the race for the Senate seat Barack Obama once held 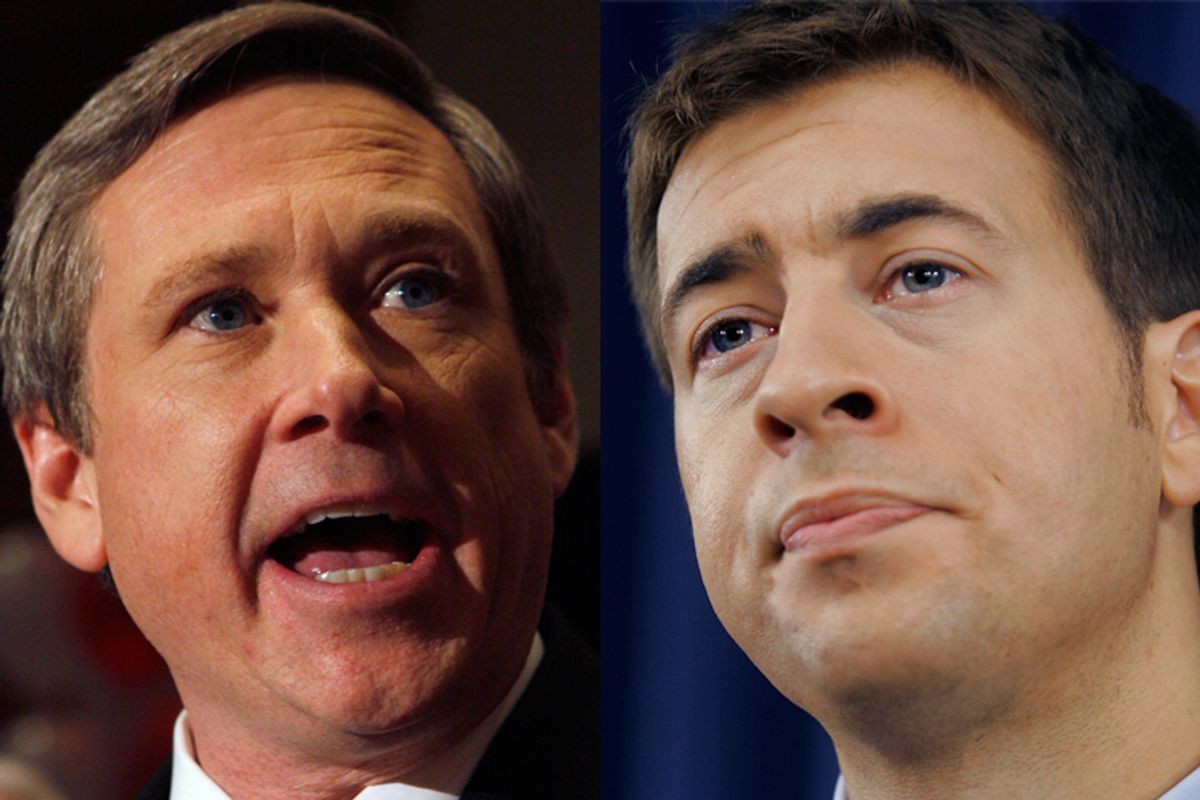 In "Brewster's Millions," a forgettable comedy from 1985, Richard Pryor's eccentric Monty Brewster spends millions of dollars to drive "None of the Above" to victory in the New York City mayor's race, shocking everyone, including Monty himself, and necessitating a new election.

Something tells me that the same NOTA option would fare quite well in Illinois this year, where the two major U.S. Senate candidates, Democrat Alexi Giannoulias and Republican Mark Kirk, continue to find new and ever-more-pitiful ways to distinguish themselves for all the wrong reasons.

Elected as Illinois' state treasurer in 2006 at the age of 30, Giannoulias captured the Democratic Senate nod only after Lisa Madigan, the state's popular attorney general, refused to run and in large part because of his perceived closeness to Barack Obama, with whom he used to regularly play pickup basketball.

From the start, Giannoulias was seen as a shallow, deeply flawed candidate because of controversies surrounding the now-collapsed Broadway Bank that his family owned. Giannoulias was a senior loan officer at the bank from 2002 to 2006 and worked there when the bank gave out millions of dollars in loans to alleged mobsters -- most notably more than $20 million to two convicted felons who were about to serve time for prostitution and bookmaking. Facing massive debt, Broadway Bank closed earlier this year. Recent reports that he paid no income taxes last year have only made Giannoulias more unpalatable.

You might think that a candidate with Giannoulias' baggage would drop out (or be forced out by his party), especially with an unbearable recession stirring populist rage against banks and bankers. But Giannoulias has hung on and the Obama White House, perhaps banking on the state's Democratic bent, has stood by him.

And this calculation may prove correct, but only because Kirk may be an even worse candidate than Giannoulias.

The GOP nominee was considered the early front-runner, but a sea of résumé embellishment reservations that would make Richard Blumenthal blush have eroded his position. In the last few months, Kirk, a Naval reservist, has been forced to backtrack on claims that he'd served in both the Gulf wars, that he'd run the Pentagon war room, and that he'd been awarded an intelligence medal -- among other fabrications. He was further embarrassed by a widely circulated clip showing him literally running away from reporters trying to question him.

Given each candidate's catalog of liabilities, it's little surprise that the race is now a tossup.

Interestingly, the Giannoulias-Kirk contest bears a striking similarity to another recent Illinois campaign, the 2006 gubernatorial race between Rod Blagojevich and Republican Judy Baar Topinka (Giannoulias' immediate predecessor in the state treasurer's office). In that campaign, too, "None of the Above" would have flourished. Blagojevich, then widely disliked (if still unindicted), ended up prevailing with under 50 percent, while a little-known Green Party nominee actually broke 10 percent. Voters clearly viewed the major party candidates with contempt.

The key difference between that race and this one is that Giannoulias will not be boosted by the same anti-Bush tides that benefited Blagojevich. Instead, the tide will be working against the Democrats this time.

Kirk, at least before this race, was a fairly well-respected moderate who impressively survived the Democratic tides of 2006 and 2008 in a House district that voted for both John Kerry and Barack Obama. He is also a stout fundraiser, having pocketed $2.3 million last quarter, and can expect strong financial support from the National Republican Senatorial Committee, which is eager to embarrass the White House by plucking the president's old seat.

This helps explain Obama's continued support of Giannoulias. The White House realizes that, with Giannoulias ensconced on the ballot, Democrats' best bet of holding the seat is for the president himself to carry Giannoulias over the finish line. Arguably, pressuring Giannoulias out and subbing Madigan in would be the smartest play, but for a White House as nonconfrontational as this one, it's hard to see that happening.

With Kirk's recent drop in the polls, Democrats are displaying renewed confidence in Giannoulias' chances. But Kirk should still be considered the favorite. While his fabrications have damaged his candidacy, they are likely to dissipate in importance as the race goes along, much as Blumenthal's have in Connecticut. Conversely, Giannoulias' ties to his family's bank will have far greater resonance with job-starved voters through the long campaign.

More important, Giannoulias would be wrong to expect too much benefit from Obama's support, even in Illinois. Given the drop in his popularity, it will be difficult for the president to rally voters to support such a flawed Senate nominee. The fact that Gov. Pat Quinn, who will run on the top of the Democratic ticket, is also a weak candidate and that Blagojevich, who is now on trial, will continue to cast a shadow over state Democrats will also hinder Obama's former basketball buddy. Giannoulias' best bet is probably to bloody Kirk beyond political recognition.

No matter what, Illinois voters seem certain to face a choice between two candidates with comically offensive deficiencies. The end result won't be attractive, but at the very least, it should be a better show than "Brewster's Millions."