"Real Housewives" and our era of catfights 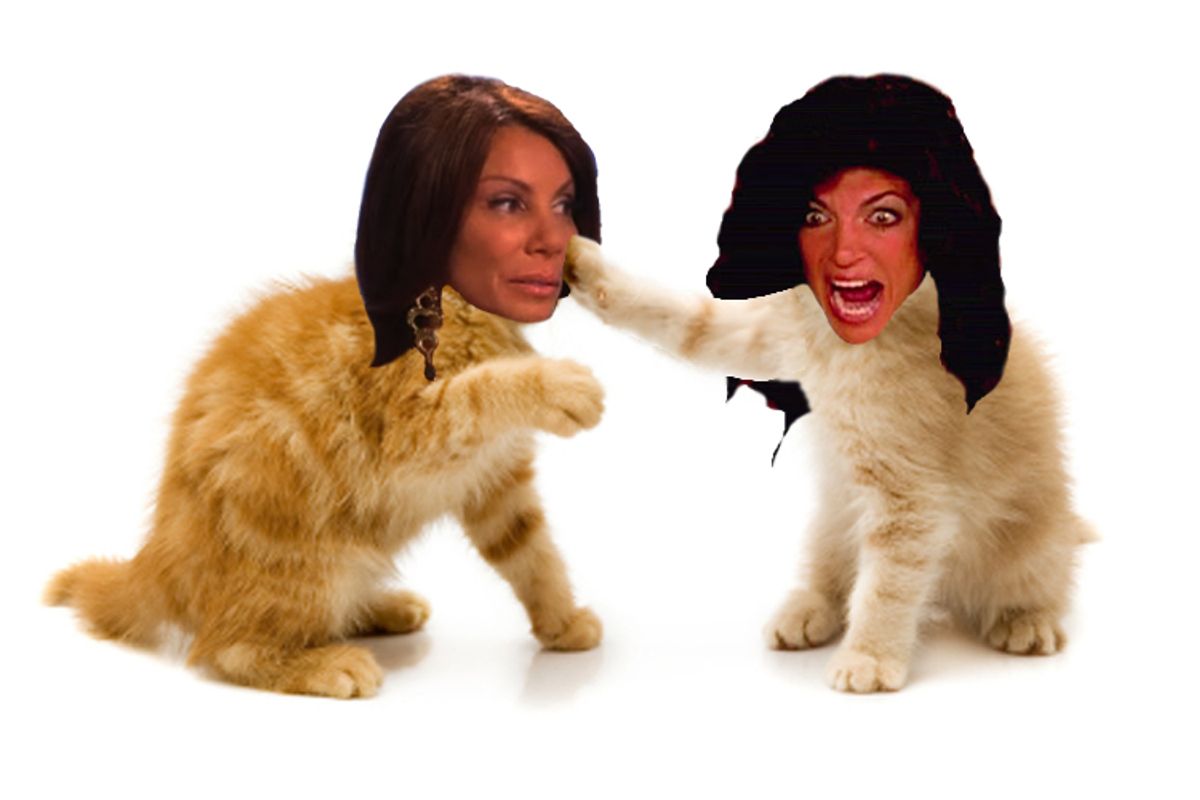 You thought the buildup to LeBron's prime time was big? Thought the World Cup offered dramatic tension? Screw that. Tonight's "The Real Housewives of New Jersey" has something none of those recent pop culture moments had going for them: catfighting!

Bravo has eagerly promoted the girl-on-girl-on-girl-on-multiple-innocent-bystanders action ever since the hair-pulling, expletive-enhanced throwdown occurred at a New Jersey country club last November. And why not? As Jerry Seinfeld explained years ago in a memorable, claws-out episode of his sitcom, "Men think if women are grabbing and clawing at each other there's a chance they might ... somehow ... kiss."

There's a thriving genre of catfight porn, but there are plenty of mainstream examples of the sexy catfight that becomes so much more. I'll never forget seeing "Wild Things" at a crowded theater. When Neve Campbell and Denise Richards started kicking each other's asses in that pool, you could hear boners rising in the audience well before they got around to kissing. Those clothes-ripping Miller Lite campaigns and Ginger vs. Mary Ann cream pie battles all tap into that simple, Seinfeldian allure of the catfight -- the way it combines our love of lesbianism with our love of a good hate fuck.

But there's something else to the catfight. We know full well Krystle and Alexis aren't gong to make out,  that it will end badly for Teri Hatcher and Charlize Theron in "Two Days in the Valley," and that despite Danielle's recent walk on the Sapphic side , she and Teresa are not going to hook up. But there's something about subverting the whole feminist paradigm that gets audiences going. Something that says, see? Women really do loathe each other's guts. It's that physical articulation of enmity that holds a vicious appeal.

If you've watched the crowd cheer Uma Thurman as she destroys Vivica Fox in "Kill Bill" or yell "Kill the skank" when Beyoncé opens up the whoop-ass on Ali Larter in "Obsessed," you know it's not that great a leap from that to the gleeful coverage of the Meg Whitman-Carly Fiorina or Michelle Obama-Patti Blagojevich "catfights." And what was that whole dust-up among Jezebel and "The Daily Show" and Emily Let-Me-Throw-My-2-Cents-In Gould  if not an old-fashioned feminist catfight? Ladies are so cute, the way they go at each other like "Jersey Shore" bitches in heat! Everybody knows when women disagree with each other, they're undermining their entire sex, because there's supposed to be one feminist doctrine. MRRRRRRREEER! And if you're the kind of person who gets off on feeling superior to chicks, that is hot.

So when, Monday night, "Real Housewives" continues its tradition of presenting us stuck-up princesses going at each other's throats, America will be right there to lap up every angry, sexy, dogma-sabotaging moment. Sisterhood is powerful, all right. It'll scratch your eyes out.