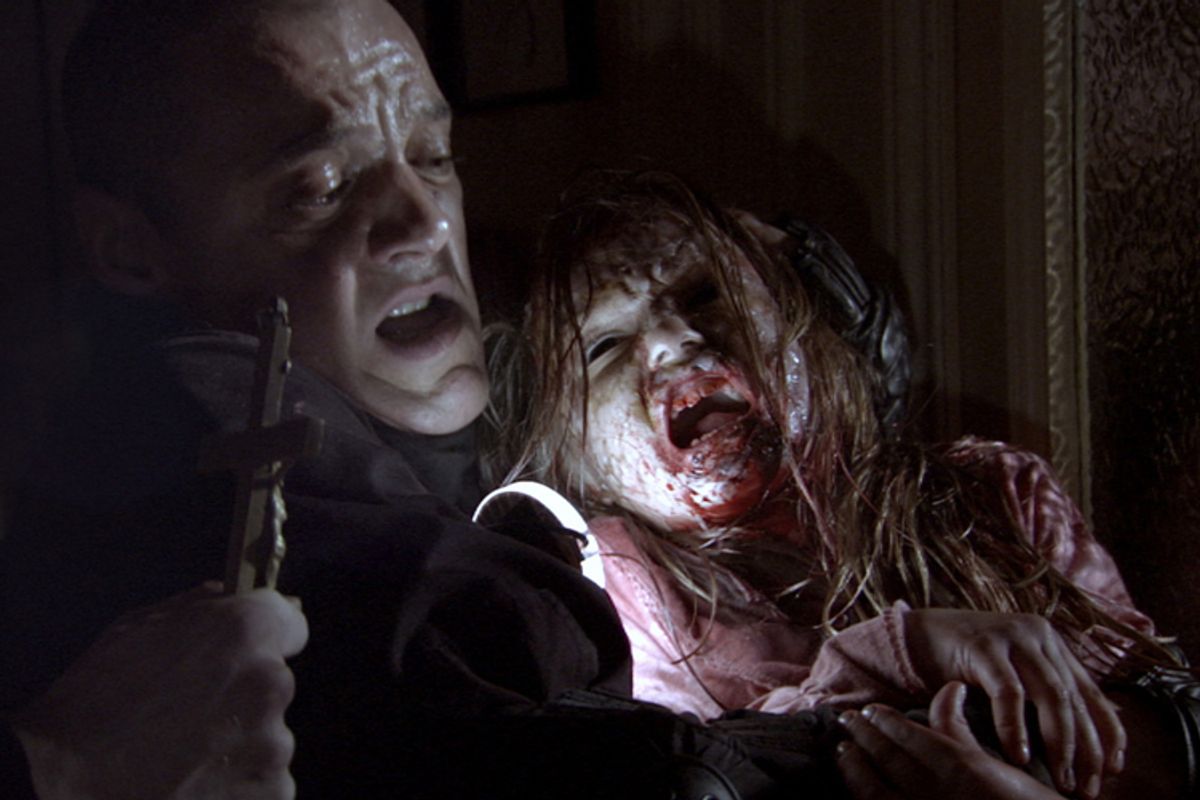 It's time to celebrate one of Spain's greatest cultural achievements on the world stage. Oh, forget that overrated soccer trophy -- I'm talking about the intense, intoxicating "[Rec]" series, from the Spanish directing duo Jaume Balagueró and Paco Plaza, shot entirely as ostensible first-person video (in the "Paranormal Activity"/"Blair Witch" vein) inside a Barcelona apartment building where a mysterious virus has broken out, rendering its denizens into flesh-rending maniacs. With the 2007 sleeper hit "[Rec]" out on DVD, and the even clammier and cleverer "[Rec] 2" now in theaters, it's the perfect moment to catch up on the most energetic new horror franchise in years.

Horror movies have always been about recycling familiar ingredients, whether you consider them clichés or archetypes -- dark houses, supernatural beings, the undead, killer diseases, murderous strangers, teen sexuality and other night terrors. So when horror fans talk about originality, what they really mean is ingenuity, or the even more awkward idea of sincerity. It's not like vampires were some cool new idea when Carl Theodor Dreyer made "Vampyr" in 1932, and it's not as if George A. Romero invented the zombie.

Horror is a test of craft and integrity; it measures how well you can tell a story and how much you believe in it. Almost any idiot can string together some gore and some gags and make something a paying audience will sit through -- indeed, way too many idiots have -- but making something that's both unjaded and terrifying, within the genre's narrative and conceptual restrictions, is devilishly difficult.

"Devilish" is the right word, on a number of levels, for what Balagueró and Plaza have accomplished. Rather than choosing one or two options from the menu listed above, they've Cuisinarted them all together and shot them up with high-quality European street speed. These are pulse-elevating, claustrophobic haunted-house movies, zombie movies, epidemic movies, demonic-possession movies and Euro-splatter flicks all at the same time, with a contemporary techno-overlay and a splash of media criticism. Maybe you feel it's a gimmick, at this point, to shoot the whole film through cameras supposedly held by the characters -- in "[Rec] 2" we get snatches of SWAT team helmet-video, teenage ne'er-do-well camcorder footage and a news camera left behind from the original "[Rec]" -- but it's rarely been done so cannily and consistently. (A third film, inevitably, is in the works.)

"[Rec]" was remade as the American film "Quarantine," and while that wasn't half as bad as a lot of the foreign-horror remakes we get, this is one of those cases where the irritating subtitle purists are right: Dude, the original was way better! It's not news to horror aficionados that European directors have injected all kinds of new life into the genre, but a full explanation of exactly how and why might have to wait for somebody's doctoral dissertation. In this case, I think the echoing, vertical, slightly decrepit 19th-century apartment building, its peculiar cast of characters and the nature of the infection -- I'm saying no more! -- are perfectly matched.

I'll stay pretty vague, to suit those who haven't seen the first film yet. Let's just say that "[Rec] 2" overlaps intriguingly with "[Rec]," and that the fate of missing newswoman Angela Vidal (Manuela Velasco), who originally entered this Building of the Damned while doing a lifestyle segment with some hunky Barcelona firefighters, is oh so fully revealed. By now the building has been fully locked down and sealed with plastic, and a shadowy government official named Owen (lugubrious, horse-faced Jonathan Mellor) is being escorted inside by a quartet of heavily armed SWAT cops. (The one in charge of filming what happens in there is played by Pablo Rosso, who happens to be the film's cinematographer. Low-budget moviemaking at its finest!)

As the cops soon discover, Owen isn't who he claims to be -- I guess the fact that he's clearly English might be a clue -- and he isn't interested in rescuing survivors. He's on a super-secret mission from God (so to speak) to find the young girl who may have started the whole thing, and if you saw "[Rec]" you already know what I'm talking about, and know that Angela Vidal met her already. Some horror fans seem to be exercised about the fact that Balagueró and Plaza aren't playing by the normal zombie-movie rules and have something more Old World and Old Testament in mind, to which I say: A) That's true, and it makes the movie a lot scarier and cooler; B) for Christ's sake, you haven't seen enough regular zombie movies? and C) there must be a proverb or saying that adequately describes horror-movie buffs who resist supernatural and/or religious elements, but I can't come up with it right now.

Along the way from the ground floor to the attic, of course, there are various shocks, surprises and ravening undead ghoulies to encounter, and the latter now exhibit a disturbing craftiness, along with vocal abilities not present in the first film. Not to mention a trio of stupid teenagers who've snuck in through the sewer armed with a camcorder and some gray-market fireworks but, sadly, have left their inflatable doll outside.

Of course, the cameras through which we watch all this periodically run out of juice, get dropped or broken during fight sequences, or are switched over to spooky-loo night vision, which can reveal (according to Owen) "occult things" not visible to the human eye. I had no idea! That's so useful! (Although how even the Dark Lord can get a bottomless well into the attic of an apartment building remains mysterious to me.) "[Rec] 2" is a pell-mell, edge-of-your-seat, theme-park ride through hell, and I strongly advise you to ignore the aspersions cast upon it by snooty critics and random Internet fanboys alike. I am your friend, horror fans! I know what you need, and this is it.

"[Rec] 2" is now playing in Chicago, Los Angeles, Minneapolis, New York and Seattle. It opens July 16 in Boston, Denver and San Francisco; July 23 in Detroit and Houston; July 30 in Dallas; Aug. 1 in Syracuse, N.Y.; Aug. 6 in Albuquerque, N.M.; and Aug. 27 in Cleveland and Tempe, Ariz., with more cities to be announced.