The root of economic fragility and political anger 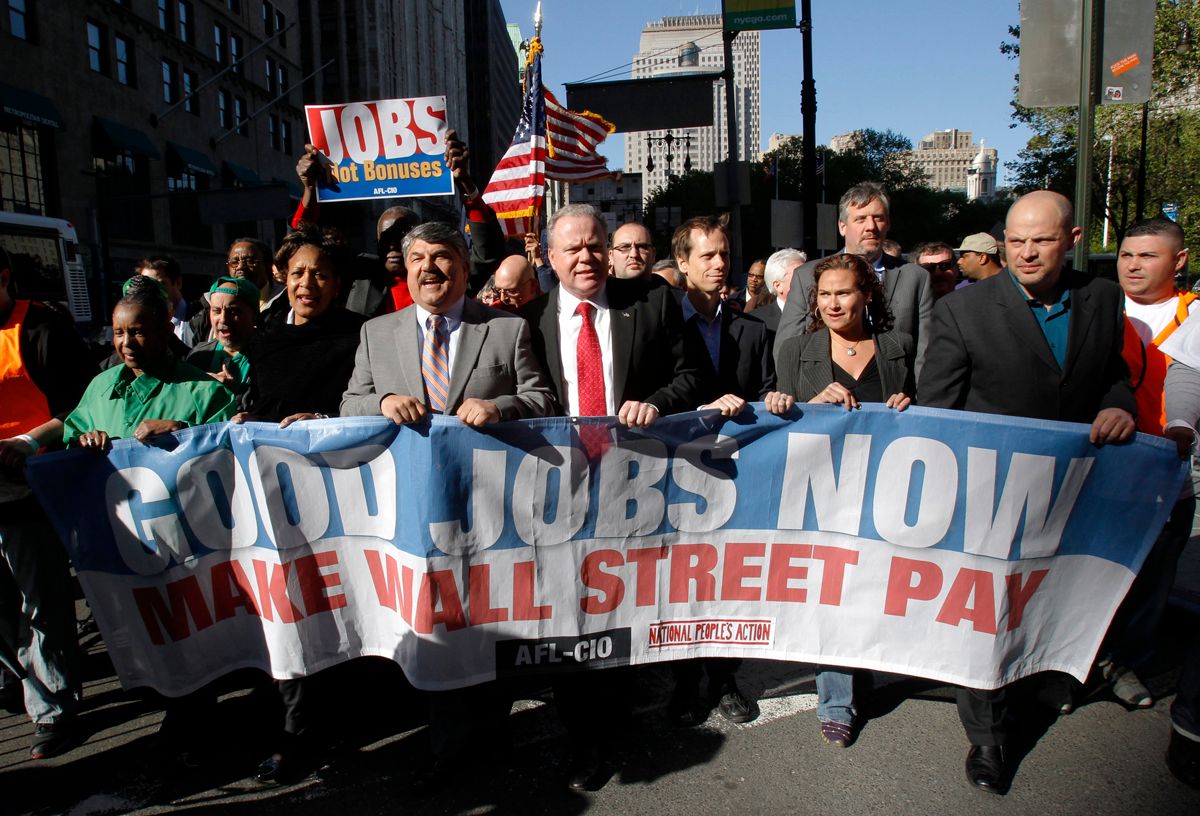 Missing from almost all discussion of America’s dizzying rate of unemployment is the brute fact that hourly wages of people with jobs have been dropping, adjusted for inflation. Average weekly earnings rose a bit this spring only because the typical worker put in more hours, but June’s decline in average hours pushed weekly paychecks down at an annualized rate of 4.5 percent.

In other words, Americans are keeping their jobs or finding new ones only by accepting lower wages.

Meanwhile, a much smaller group of Americans’ earnings are back in the stratosphere: Wall Street traders and executives, hedge-fund and private-equity fund managers, and top corporate executives. As hiring has picked up on the Street, fat salaries are reappearing. Richard Stein, president of Global Sage, an executive search firm, tells the New York Times corporate clients have offered compensation packages of more than $1 million annually to a dozen candidates in just the last few weeks.

We’re back to the same ominous trend as before the Great Recession: a larger and larger share of total income going to the very top while the vast middle class continues to lose ground.

And as long as this trend continues, we can’t get out of the shadow of the Great Recession. When most of the gains from economic growth go to a small sliver of Americans at the top, the rest don’t have enough purchasing power to buy what the economy is capable of producing.

America’s median wage, adjusted for inflation, has barely budged for decades. Between 2000 and 2007 it actually dropped. Under these circumstances the only way the middle class could boost its purchasing power was to borrow, as it did with gusto. As housing prices rose, Americans turned their homes into ATMs. But such borrowing has its limits. When the debt bubble finally burst, vast numbers of people couldn’t pay their bills, and banks couldn’t collect.

We all know what happened in the years immediately following these twin peaks—in 1929 and 2008.

Yes, China, Germany and Japan have contributed to America’s demand-side problem by failing to buy as much from us as we buy from them. But to believe that our continuing economic crisis stems mainly from the trade imbalance—we buy too much and save too little, while they do the reverse—is to miss the biggest imbalance of all. The problem isn’t that typical Americans have spent beyond their means. It’s that their means haven’t kept up with what the growing economy could and should have been able to provide them.

A second parallel links 1929 with 2008: when earnings accumulate at the top, people at the top invest their wealth in whatever assets seem most likely to attract other big investors. This causes the prices of certain assets—commodities, stocks, dot-coms or real estate—to become wildly inflated. Such speculative bubbles eventually burst, leaving behind mountains of near-worthless collateral.

The crash of 2008 didn’t turn into another Great Depression because the government learned the importance of flooding the market with cash, thereby temporarily rescuing some stranded consumers and most big bankers. But the financial rescue didn’t change the economy’s underlying structure — median wages dropping while those at the top are raking in the lion’s share of income.

That’s why America’s middle class still doesn’t have the purchasing power it needs to reboot the economy, and why the so-called recovery will be so tepid—maybe even leading to a double dip. It’s also why America will be vulnerable to even larger speculative booms and deeper busts in the years to come.

The structural problem began in the late 1970s when a wave of new technologies (air cargo, container ships and terminals, satellite communications and, later, the Internet) radically reduced the costs of outsourcing jobs abroad. Other new technologies (automated machinery, computers and ever more sophisticated software applications) took over many other jobs (remember bank tellers? telephone operators? service station attendants?). By the ’80s, any job requiring that the same steps be performed repeatedly was disappearing—going over there or into software. Meanwhile, as the pay of most workers flattened or dropped, the pay of well-connected graduates of prestigious colleges and MBA programs—the so-called “talent” who reached the pinnacles of power in executive suites and on Wall Street—soared.

The puzzle is why so little was done to counteract these forces. Government could have given employees more bargaining power to get higher wages, especially in industries sheltered from global competition and requiring personal service: big-box retail stores, restaurants and hotel chains, and child- and eldercare, for instance. Safety nets could have been enlarged to compensate for increasing anxieties about job loss: unemployment insurance covering part-time work, wage insurance if pay drops, transition assistance to move to new jobs in new locations, insurance for communities that lose a major employer so they can lure other employers. With the gains from economic growth the nation could have provided Medicare for all, better schools, early childhood education, more affordable public universities, more extensive public transportation. And if more money was needed, taxes could have been raised on the rich.

But starting in the late 1970s, and with increasing fervor over the next three decades, government did just the opposite. It deregulated and privatized. It increased the cost of public higher education and cut public transportation. It shredded safety nets. It halved the top income tax rate from the range of 70–90 percent that prevailed during the 1950s and ’60s to 28–40 percent; it allowed many of the nation’s rich to treat their income as capital gains subject to no more than 15 percent tax and escape inheritance taxes altogether. At the same time, America boosted sales and payroll taxes, both of which have taken a bigger chunk out of the pay of the middle class and the poor than of the well-off.

Companies were allowed to slash jobs and wages, cut benefits and shift risks to employees (from you-can-count-on-it pensions to do-it-yourself 401(k)s, from good health coverage to soaring premiums and deductibles). They busted unions and threatened employees who tried to organize. The biggest companies went global with no more loyalty or connection to the United States than a GPS device. Washington deregulated Wall Street while insuring it against major losses, turning finance—which until recently had been the servant of American industry—into its master, demanding short-term profits over long-term growth and raking in an ever larger portion of the nation’s profits. And nothing was done to impede CEO salaries from skyrocketing to more than 300 times that of the typical worker (from thirty times during the Great Prosperity of the 1950s and ’60s), while the pay of financial executives and traders rose into the stratosphere.

It’s too facile to blame Ronald Reagan and his Republican ilk. Democrats have been almost as reluctant to attack inequality or even to recognize it as the central economic and social problem of our age. (As Bill Clinton’s labor secretary, I should know.) The reason is simple. As money has risen to the top, so has political power. Politicians are more dependent than ever on big money for their campaigns. Modern Washington is far removed from the Gilded Age, when, it’s been said, the lackeys of robber barons literally deposited sacks of cash on the desks of friendly legislators. Today’s cash comes in the form of ever increasing campaign donations from corporate executives and Wall Street, their ever larger platoons of lobbyists and their hordes of PR flacks.

The Great Recession could have spawned another era of fundamental reform, just as the Great Depression did. But the financial rescue reduced immediate demands for broader reform.

Obama might still have succeeded had he framed the challenge accurately. Yet in reassuring the public that the economy will return to normal he has missed a key opportunity to expose the longer-term scourge of widening inequality and its dangers. Containing the immediate financial crisis and then claiming the economy is on the mend has left the public with a diffuse set of economic problems that seem unrelated and inexplicable, as if a town’s fire chief deals with a conflagration by protecting the biggest office buildings but leaving smaller fires simmering all over town: housing foreclosures, job losses, lower earnings, less economic security, soaring pay on Wall Street and in executive suites.

Much the same has occurred with efforts to reform the financial system. The White House and Democratic leaders could have described the overarching goal as overhauling economic institutions that bestow outsize rewards on a relative few while imposing extraordinary costs and risks on almost everyone else. Instead, they have defined the goal narrowly: reducing risks to the financial system caused by particular practices on Wall Street. The solution has thereby shriveled to a set of technical fixes for how the Street should conduct its business.

What we get from widening inequality is not only a more fragile economy but also an angrier politics. When virtually all the gains from growth go to a small minority at the top — and the broad middle class can no longer pretend it’s richer than it is by using homes as collateral for deepening indebtedness — the result is deep-seated anxiety and frustration. This is an open invitation to demagogues who misconnect the dots and direct the anger toward immigrants, the poor, foreign nations, big government, “socialists,” “intellectual elites,” or even big business and Wall Street. The major fault line in American politics is no longer between Democrats and Republicans, liberals and conservatives, but between the “establishment” and an increasingly mad-as-hell populace determined to “take back America” from it.

When they understand where this is heading, powerful interests that have so far resisted fundamental reform may come to see that the alternative is far worse.