Birther pastor: "9/11 Christian Center" not confrontational to "the Muslims" 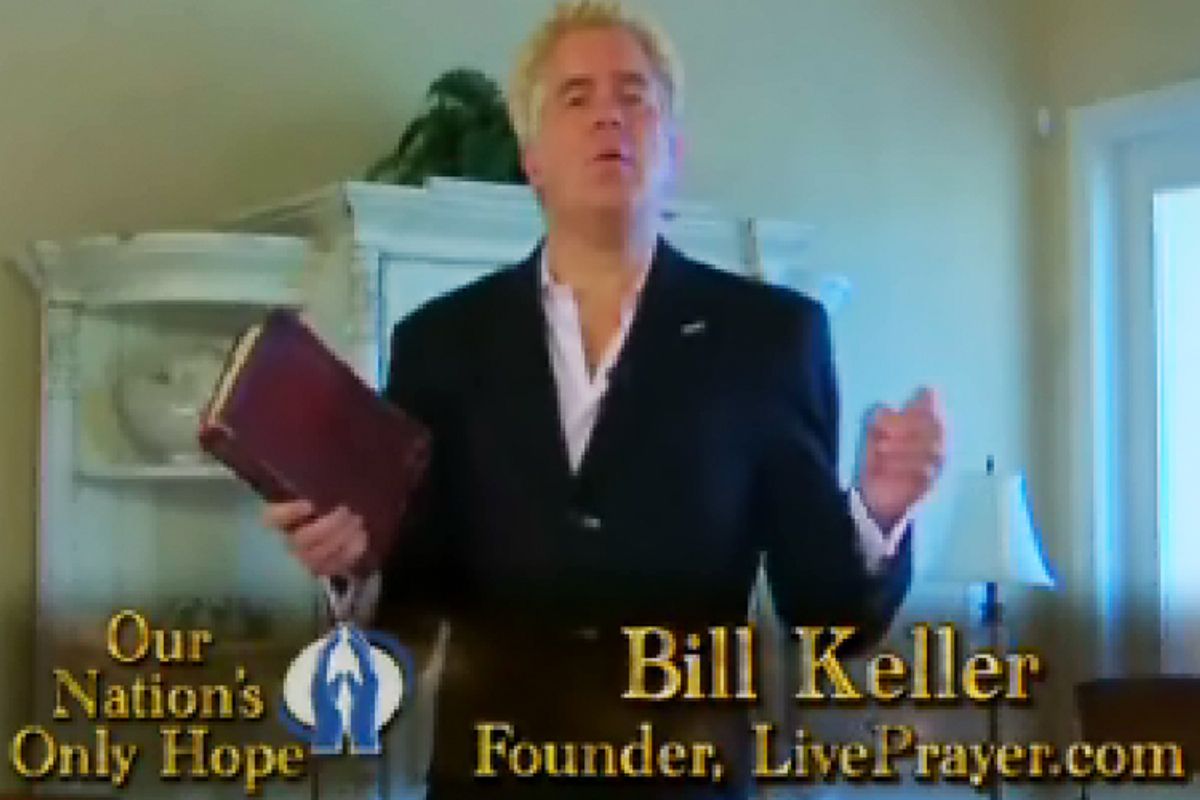 Internet pastor Bill Keller doesn't have a location for his proposed "9/11 Christian Center at Ground Zero." He doesn't have a staff. A Floridian, he admits he doesn't even know anyone in New York.

But, Keller told Salon today, he intends to have the new church -- his answer to the planned Muslim community center derided by some right-wingers as the "Ground Zero Mosque"-- up and running by Jan. 1.

"This is not to be confrontational with the Muslims, it really isn't," he said of the 9/11 Christian Center. Asked about the center's website, which calls Islam a "false religion" whose 1 billion adherents "are going to Hell," Keller said it was not intended as confrontation but rather "telling the truth."

And he insisted the money donated to him for the church project, the cost of which he pegs at $1 million, will be used for legitimate purposes -- even though Keller has been involved in questionable fundraising schemes in the past. Our favorite is Gold for Souls, a project of Keller's LivePrayer.com ministries, which advertises "personal responses to all email prayer requests."

Gold for Souls is a service in which you send Keller your "old gold, jewelry, diamonds, and precious items" and ... well, that's about it. Keller, who dedicated his life to ministering after an insider trading conviction in 1989, makes his pitch on a promotional video for Gold for Souls:

Today we legally slaughter 4,000 innocent babies every 24 hours in this nation ... We've made mainstream sexual perversions of every kind. Our government supports the enemies of israel. Pornography and gambling are now socially acceptable. We bow down and worship every false god and idol man has dreamed up in his deranged mind. ...

Now you can be part of this great movement to turn this nation back to God and biblical truth! One way you can help is by donating your old gold and jewelry to Gold For Souls.com.

He continues: "Gold For Souls will not only get you a tax deductible donation receipt for the fair market value of your gold and jewelry, but it will pay you eternal dividends since the funds will be used to help lead this nation back to God and biblical truth and the souls of men to faith and Jesus Christ."

Keller told Salon that the service has been "well-received" since it launched in February and has helped support the work of his St. Petersburg-based outfit. He also stressed that he was merely paid to host and produce an infamous 2009 Birther infomercial. The proceeds from the infomercial, in which viewers were asked to pay $30 to send faxes demanding Obama's birth certificate, went to his partner in the project, conservative activist Gary Kreep. (Keller added, "It would be nice to see someone get a hold of that original birth certificate.")

As for the 9/11 Christian Center, Keller is eager to get started, so he claims he will travel to New York from Florida once a week starting in September and preach at the Embassy Suites hotel in lower Manhattan, until he finds a permanent home -- or, perhaps more likely, the project fizzles.

(Keller contacted Salon after a piece ran about him yesterday, writing in an e-mail, "I know Salon is nothing but a smear rag..but at least ahve [sic] the nads to call." So we did.)