Yes, it really is the economy, stupid 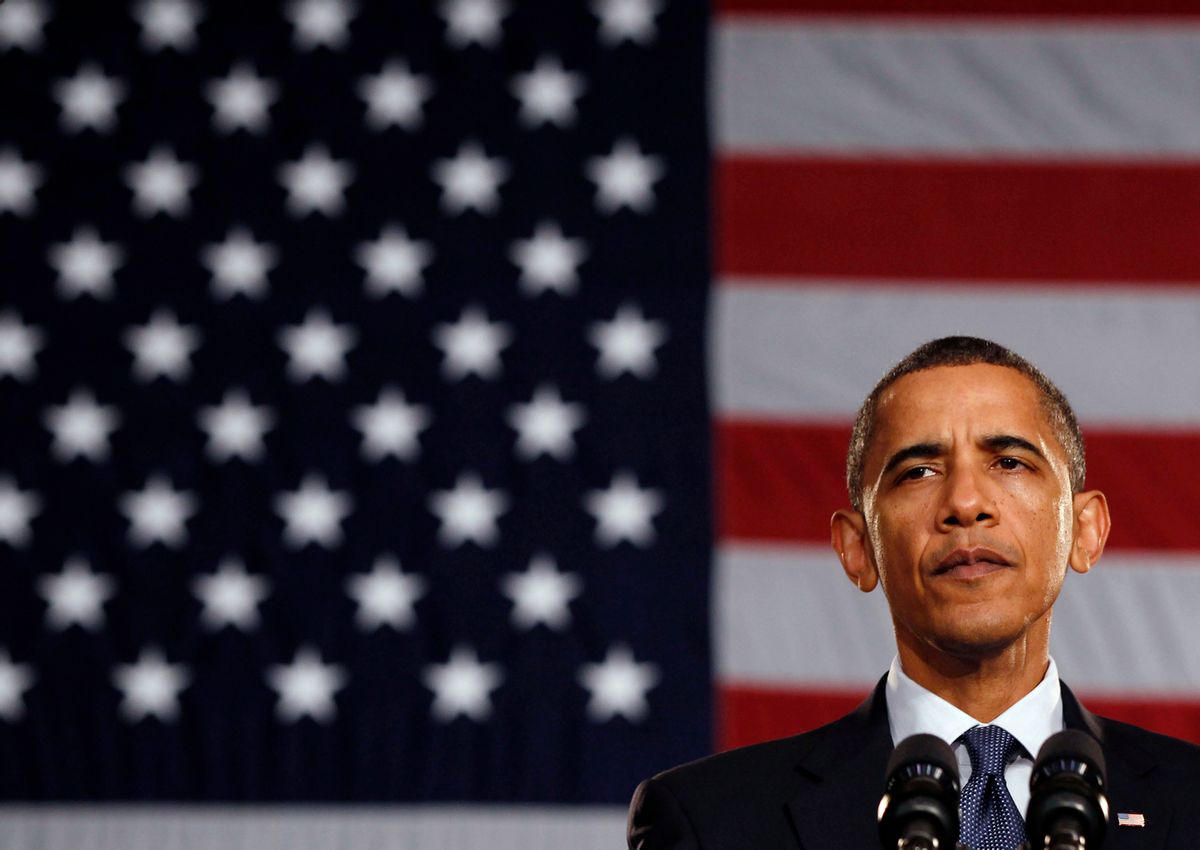 First, please forgive the "It’s the economy, stupid" construction in the headline. I remember feeling all the way back in December 1992 that it was played out, and yet here I am employing it 18 years later. The reason: Sean Trende of Real Clear Politics has a post up that I can’t resist responding to -- and he used it in his headline. So blame him.

Trende’s subject is one I’ve written about extensively here: the source of Barack Obama’s middling second year approval ratings. He claims that the president’s struggles (and his party’s poor midterm election prospects) reflect a broad rejection of his governing style and the agenda he’s pursued -- particularly on healthcare. I believe that, strictly from a polling standpoint, it’s never really mattered what Obama does or doesn't do in his first two years: His approval rating in 2010 was always going to be lousy and his party was always going to fare badly in the midterms, thanks to the economy.

Trende uses a political forecasting model that relies on economic data and notes that Obama’s approval rating is currently three points below where the model says it should be -- and that at one point last year, it was ten points below its predicted level. His conclusion: "A controversial energy bill, a prolonged, contentious fight over health policy, and yes, even a ‘snakebit’ response to the oil spill, have had a substantial effect on the President’s approval ratings."

He also points out that only four percent of voters in a CBS/New York Times poll said that Obama is mainly responsible for the poor economy, while a Democracy Corps poll found that 25 percent of those who disapprove of Obama’s performance identify healthcare as their main gripe with the administration -- far more than who cite the economy. So there you have it, I guess.

This is what I like to call wishful analysis, and there’s a lot of it going around on the right, which has been savoring the chance to call Barack Obama a failure -- and the 2008 election an aberration – from the moment he was elected. Now they have polling data that can help them make that case. This is nothing new, of course. The left has committed the exact same sin, many times over. Just go and read what liberals were saying back in 1982 when Ronald Reagan’s approval numbers fell to where Obama’s are today. Faced with a season of good polling news -- especially when it comes after a humbling election or two -- no political party or movement has ever missed the chance to read way too much into it. And that’s what’s going on here.

There are a few basic problems with Trende’s argument. First, he makes too much out of the finding that only four percent of voters think the awful economy is mainly Obama’s fault. I’ve written before that the electorate, as a whole, has no collective memory or foresight, but that’s not entirely true: Almost everyone remembers the week that Wall Street melted down 22 months ago -- and they remember who was president back then.

But just because voters recognize, as a factual matter, that Obama was not in the White House when the economy collapsed (or at any point leading up to the collapse) doesn’t mean that they have good feelings about how he’s handled the crisis as president. In the same survey, 50 percent of voters identified the economy or jobs as the most important issue facing the country, while a plurality expressed disapproval of Obama’s job performance on economic issues. In other words, voters are upset that Obama hasn’t put the fire out, even if they know someone else started it.

Then Trende looks at an open-ended question in a Democracy Corps poll that asked voters who disapprove of Obama’s job performance what specifically they don’t like. The biggest individual items cited were "fiscal irresponsibility"" and healthcare, while Trende notes that "[m]ore respondents expressed concern that the President was a socialist/communist (8%) than were upset about jobs and unemployment (6%)." This is where he gets his evidence that what we are actually witnessing is a revolt against Obama’s agenda.

But I suspect he’s making too much of this. The way I look at the electorate, there are, roughly speaking, three groups of voters that are now likely to disapprove of Obama’s job performance. One is the diehard GOP base -- the 25 to 30 percent of voters who still gave George W. Bush positive reviews in the final days of his presidency. They have never been receptive to Obama and never will be. They make up at least half of the "disapprove" total now. They don’t need a bad economy to oppose Obama. It’s far more likely that they’d cite healthcare, or fiscal irresponsibility or even “socialism/communism” as a reason for rating him negatively.

The second group consists of Republican-friendly voters who liked the idea of giving the new president a chance. They mostly didn’t vote for Obama in 2008 but (unlike the GOP diehards) they weren’t horribly offended or threatened by him. Their soft support in the early days of his presidency is a big reason he had sky high approval ratings then. But these voters have conservative instincts, and as Obama pursued his agenda, he was bound to lose most of them -- at least for now. They’re particularly open to the right’s arguments about reckless spending, big deficits, and government-run healthcare.

And then there’s the third group: actual swing voters, many of whom supported Obama in ’08. They are a small group, but their defections are most tied to the economy and jobs. Losing them is the reason Obama’s approval is somewhere in the 40s, even though he was elected with 53 percent.

The united opposition of all three of these groups explains why Obama is now facing negative job approval numbers, why a (relatively) small number of voters cited the economy in explaining why they disapprove of him, and why his party is almost certain to lose big this fall.

But ask yourself: What will these three groups be saying about Obama if the economy improves considerably by 2012? I think it’s pretty obvious. The diehards will still oppose him and still call him a socialist. Some of the mushier Republican-friendly voters will change their minds and give him positive job approval scores, even if most of them still don’t vote for him (although a relative few of them would). And the swing voters will come back decisively. That would add up to a job approval rating in the mid-to-high 50s for Obama and a small improvement between ’08 and ’12 in his election performance.

This is a pattern we’ve seen before, with Ronald Reagan in his first term. At this point in 1982, with the country facing almost identical unemployment, polls found voters turning on Reagan on virtually every issue -- not just economic ones. But as the economy improved in 1983 and 1984, so did his scores in most of those areas, along with his overall approval rating.

In a sense, Trende has a point: The expansive agenda Obama has pursued provides plenty of specific targets for his foes. But if he had pursued different (or fewer) agenda items, I doubt his overall approval rating would be much different. The diehards would still hate him, the mushier Republicans would still have turned on him (maybe more of them would cite the deficit, instead of, say healthcare), and he’d still be losing swing voters, too. A bad economy causes voters whose opinions are subject to change to view just about all of a president’s agenda items negatively (or to de-emphasize the agenda items that they agree with). A robust economy reverses this phenomenon.

Maybe Obama’s done a thing or two to put his approval rating just slightly under where the most popular prediction models say it should be. Or maybe it’s exactly where he should be, to the decimal point. Maybe it’s even a point or two above. It doesn’t really matter. You could say that I’m also guilty of wishful analysis for being so dismissive of Obama’s second year poll numbers. But I’ll be the first to admit that if there isn’t measurable improvement in the economy by ’12, he’ll be in serious trouble.