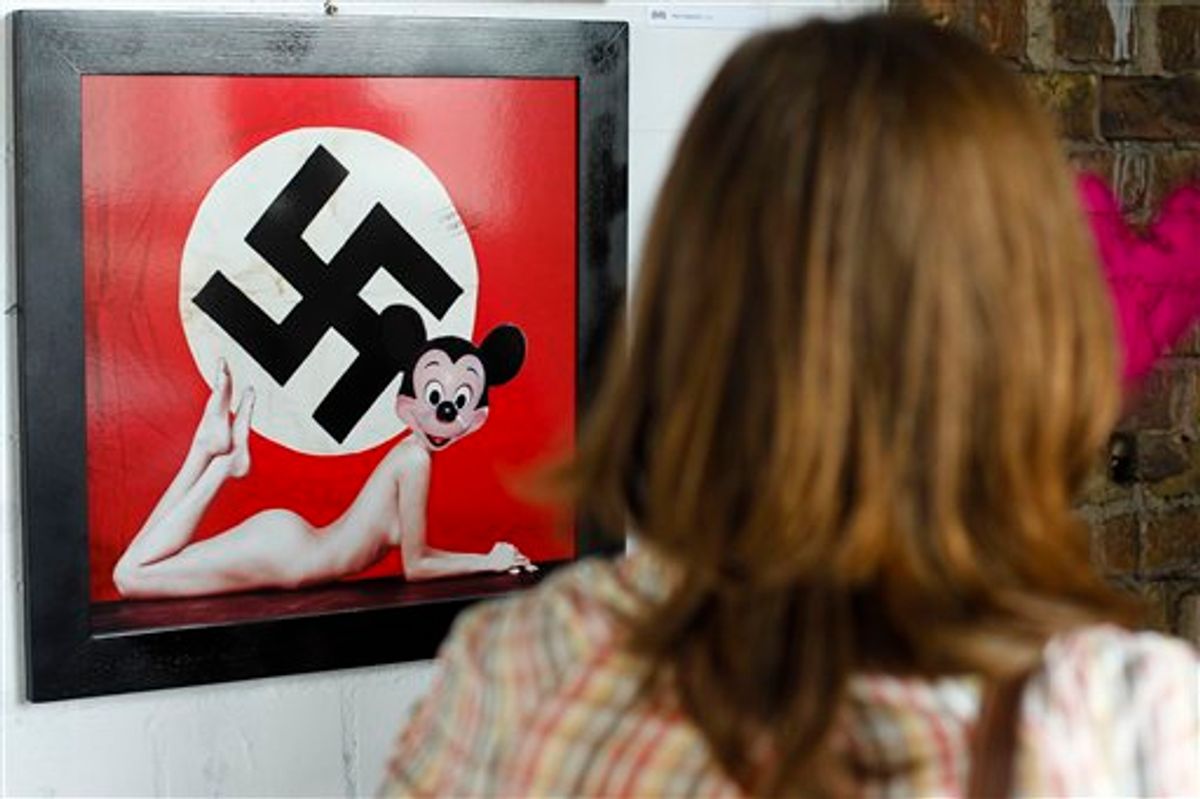 A woman stands in front of a artwork by Italian artist Max Papeschi at the exhibition 'Abnormal Nudes' at the alternative art house Tacheles in Berlin on Tuesday, July 13, 2010. The art poster hung on a Polish street that blends Mickey Mouse's innocent image with that of a swastika and a nude woman's body is causing a stir in Poland, where memories of suffering inflicted by Nazi Germany remain strong. The poster, which went up last month in the western city of Poznan just steps from an old synagogue, is an Italian artist's critical take on what he calls the "horrors" of the American lifestyle and is one work in a contemporary art exhibition that is to open in the fall. (AP Photo/Markus Schreiber) (AP)
--

A huge outdoor art poster that blends Mickey Mouse's image with that of a swastika and a nude woman's body is causing a stir in Poland, where memories of the suffering inflicted by Nazi Germany remain strong.

The poster, which went up in June in the western city of Poznan just steps from a synagogue, is an Italian artist's take on what he calls the "horrors" of the American lifestyle and is one piece of artwork in a contemporary art exhibition opening in the fall.

But the reaction shows that there is little appetite in Poland for satirical or artistic uses of images linked to Nazi Germany, which invaded Poland in 1939 and built ghettoes and death camps across the country in which millions were murdered.

"This art provocation is a form of violence against the sensitivity of many people," said Norbert Napieraj, a city council member who asked prosecutors to ban the poster.

Prosecutors, however, determined that the poster is art and does not violate the country's laws against glorifying Nazism.

The poster has been vandalized twice since it first went up, and on Tuesday was no longer stretched across a building in the city center. Despite the uproar, gallery director Maria Czarnecka said she plans to put it back up.

"Art should be provocative and controversial," she told The Associated Press, insisting that the poster does not seek to propagate Nazism but instead wants to explore "symbols and how they work."

"The Mickey Mouse head and swastika are on the same level -- they don't mean anything and they are both part of the globalized world," Czarnecka said.

Jewish leaders, who have been outraged at the poster, would disagree, saying the swastika still means something very real to many Poles, Jews and non-Jews alike.

Poland was once home to Europe's largest Jewish community, which numbered close to 3.5 million people before it was nearly wiped out in the Holocaust. The Nazis also committed atrocities against the non-Jewish population, and killed some 6 million Polish citizens, about half Jewish and the other half Christian.

The head of Poznan's Jewish community, Alicja Kobus, 64, described being overwhelmed by revulsion when she first saw the poster. She had just been with Jewish visitors from Holland to the synagogue, which the Nazis turned into a swimming pool.

"It is a shock for people who still scarred by the hell of the Holocaust," she said.

The work -- "NaziSexyMouse" by Italian artist Max Papeschi -- is part of a series works that blend iconic American cartoon figures with images of warfare or destruction.

Papeschi explains on his website that the series -- which he dubs "Politically-Incorrect" -- is meant as commentary on the United States, revealing "all the horror of this lifestyle."

His images -- Mickey Mouse as a Nazi or Ronald McDonald as a machine-gun bearing soldier in Iraq -- lose "their reassuring effect and change into a collective nightmare," Papeschi said.

"NaziSexyMouse" also went on show this week in Berlin as part of an exhibition at a sister gallery. But the image has not been displayed publicly there and has sparked no outcry.

A Berlin art gallery manager said older people often do not understand that the combination of pop culture icons like Mickey Mouse and historical symbols like the swastika are meant to be satirical.

"For the younger generation, this painting is just a joke; older people sometimes don't like it or don't find it funny, but nobody has taken any offense so far," said Agnes Kaplon, manager of the Abnormals Gallery in Berlin.

A Russian art exhibition that also used Mickey Mouse's image has also been at the center of a legal case in Russia. Two Russian curators who angered the Russian Orthodox Church with an exhibition that included images of Jesus Christ portrayed as Mickey Mouse and Vladimir Lenin were convicted Monday of inciting religious hatred and fined, but not sentenced to prison.