"Birthermercial" scam artist Bill Keller is at it again, this time near ground zero 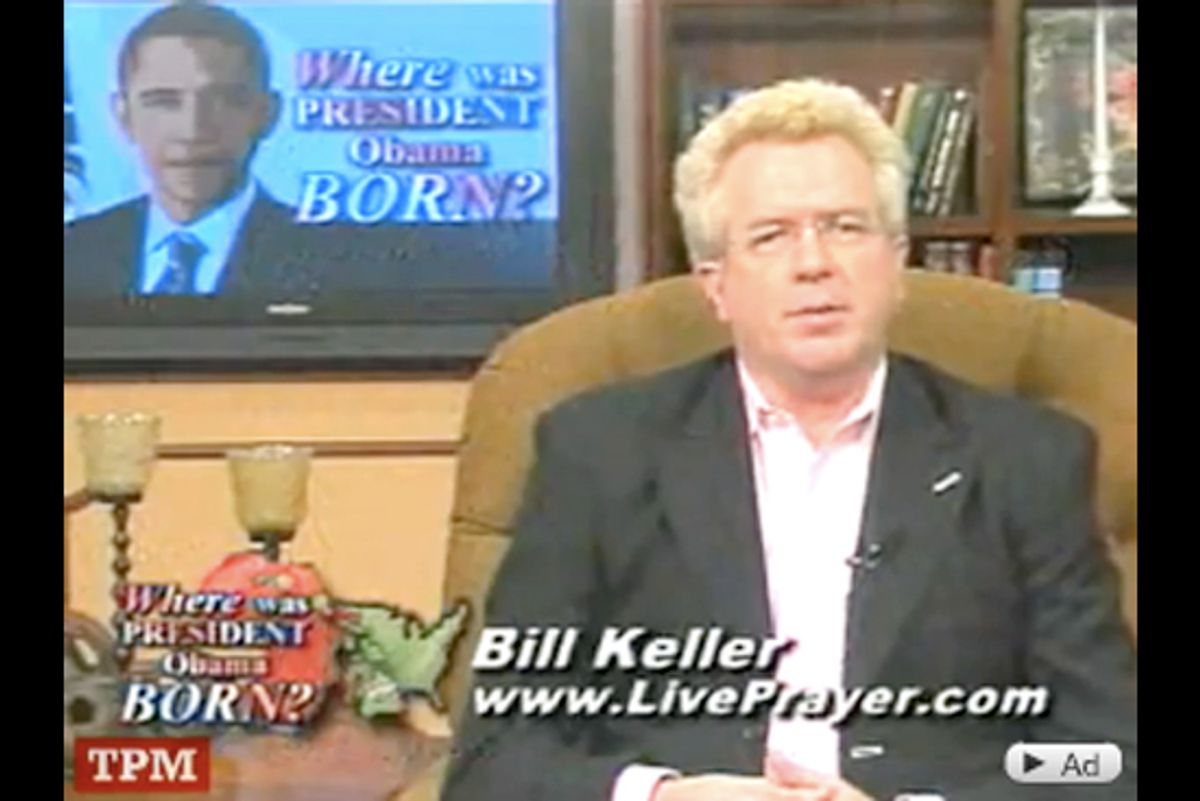 Bill Keller, the Florida pastor Alex wrote about earlier who says he is planning a "9/11 Christian Center" as an alternative to a Muslim community center planned near ground zero, is also a leading Birther.  He gained notoriety last year with a late-night informercial demanding that President Obama produce his birth certificate and encouraging viewers to send him money to help keep the pressure on.

The Cordoba House project near the World Trade Center site has produced a large-scale freakout among prominent conservatives, including New York Rep. Peter King and gubernatorial candidate Rick Lazio, despite strong support for the project from Mayor Michael Bloomberg and the local community board.

Joining them in opposing the community center is Keller, a fundamentalist Christian pastor who runs an Internet prayer service called LivePrayer. He calls the project "a spit in the face of the people of New York." Keller is now proposing a $1 million project next door that he dubs  "the 9/11 Christian Center at Ground Zero."

It looks a lot like Keller is seizing an opportunity to reap easy cash from conservatives around the country who are horrified by what they read in Human Events about the proposed Muslim community center -- just as Keller saw an opportunity when he tapped into the Birther movement with an informercial last year.

"Where was President Obama born? Why does he refuse to produce his official state of Hawai birth certificate? What is he hiding?" Keller asked in the Birthermercial, which was running in at least seven states in the South. "Don't sit back, do nothing. Act now! Tell President Obama to prove where he was born."

For a donation of $30, Keller's group would send faxes to state attorneys general asking them to demand Obama produce his birth certificate. As a special thank you, those sending in money got a custom-made "Got a birth certificate?" bumper sticker.

The slapdash website of Keller's Christian Center, which is sprinkled with quotes damning Muslims (one prayer on the site is titled "The False Religion of Islam and the Courage to Tell One Billion People They are Going to Hell"), features a large donate button at the top, encouraging visitors to "Take your stand against evil." The donate link takes visitors straight to the donation section of the Web site of Keller's LivePrayer outfit.

Here's a highlight reel from the Birthermercial: