Mel Gibson's ugly tirades: It's not wrong to laugh

Tapes of the actor's rants are horrifying, but there's a good reason they inspire so many jokes 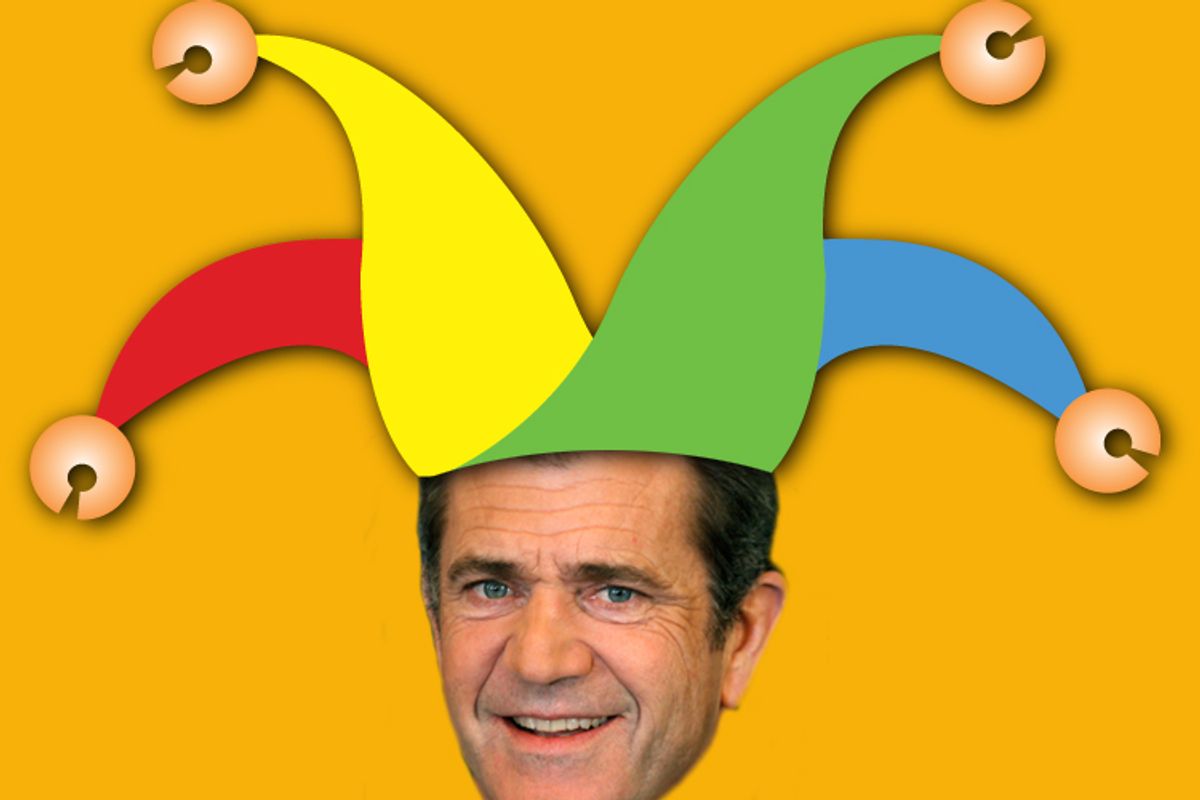 When RadarOnline began releasing the violent, racist, horrifying audio clips, purportedly of Mel Gibson raging at estranged girlfriend Oksana Grigorieva, it was a harrowing glimpse into an apparently deeply disturbed mind. And as the shocking clips just kept coming, it also became a field day for jokesters.

On Monday, comic Michael Ian Black took to Craig Ferguson's couch to pitch himself, "now that Mel has imploded," as the world's new favorite Australian. Letterman, meanwhile, offered Gibson's "Top Ten Excuses."  "Number one: Wanted to show the Jews I'm an equal opportunity offender." There was the inevitable YouTube "phone fight" pitting rage-a-holic Mel against anger poster-child Christian Bale, along with the so of-the-moment-it-hurts mashup featuring that seriously emo double rainbow guy.  And in a stroke of twisted genius, Buzzfeed went for the win with a choice collection of Gibson's most colorful quotes set in Hallmark card doodly fonts and accompanied by photos of adorable wide-eyed kittens. Why? Because "mentally deprived idiot" just doesn't seem so bad coming from a baby animal in a meadow. In my own home, Gibson's furious "You make me wanna smoke!" has quickly replaced BP CEO Tony Hayward's "I'd like my life back" as my new favorite expression of exasperation.

Why are we so eager to laugh off somebody so blatantly horrible? Isn't it patently insensitive to make light of someone who appears to be not just a hateful creep but also a full-fledged domestic abuser?

Well, if you think threatening the mother of your child is hilarious, sure. But those nervous giggles are more likely an acknowledgment that our greatest weapon against the things that frighten and anger us is to make them foolish. Because some days the sheer physical release of laughing is all that keeps us from crying.

Another famous Mel, Mr. Brooks, once explained how he was able to fight Nazis in World War II and turn them in musical comedy fodder decades later. Because, he said: "The greatest comedy plays against the greatest tragedy. Comedy is a red rubber ball and if you throw it against a soft, funny wall, it will not come back. But if you throw it against the hard wall of ultimate reality, it will bounce back and be very lively." We can look at a man like Mel Gibson and know how many other guys just like him there are out there right now, screaming frightening invectives into their phones. And if we can't cure prejudice and abuse, we can, at least, keep pelting them with the rubber balls of absurdity.