The couple announce their engagement. Soon enough, this will be fed to us as a Republican parable 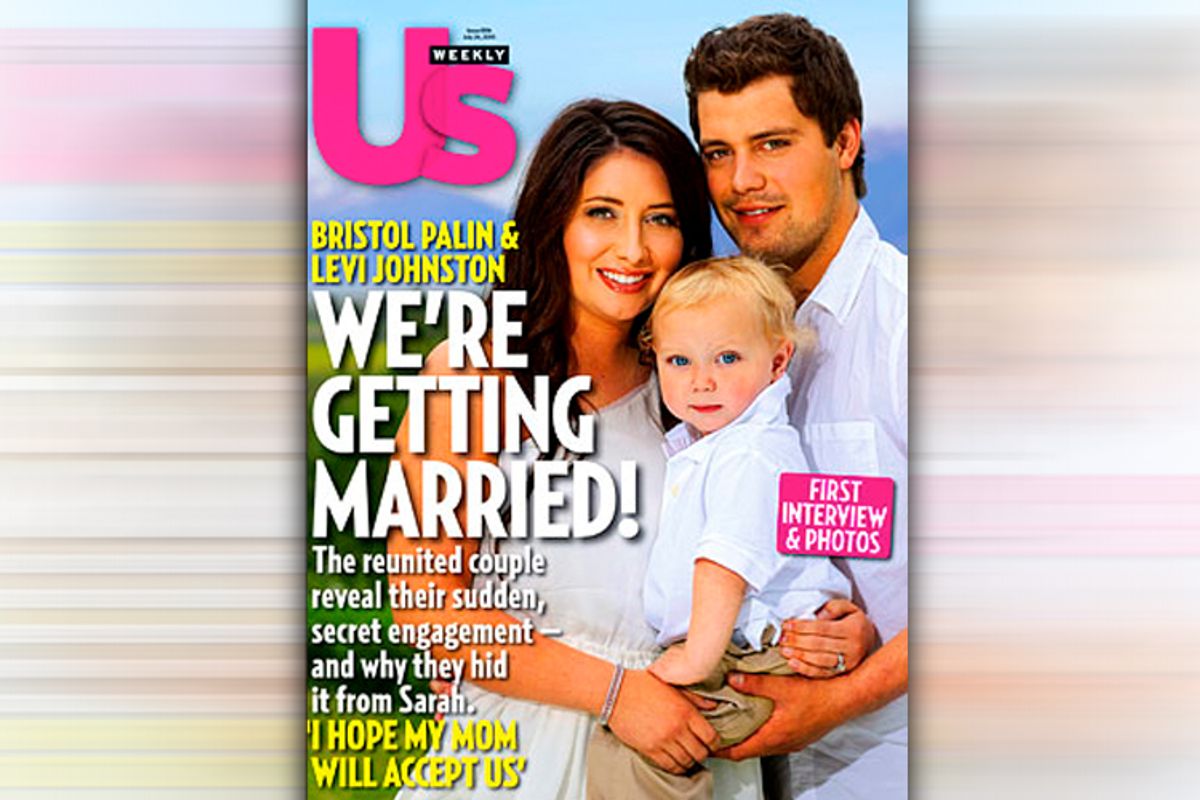 She has been a (perhaps unwitting) symbol of her mother's ultimate pro-life commitment; he cut off his mullet and agreed to wear a suit for the Republican Convention. She spent her first year postpartum making bank telling other young women not to even think of having sex; he was dubbed "Sex on Skates" by New York magazine and stripped down to his skivvies for cash. But perhaps, like the boy who pulls your pigtail on the playground, all those differences and petty squabbles were a sign of true love; according to this week's Us Weekly magazine, it was all just a prelude to a big white Alaskan wedding: Bristol Palin, abstinence educator, and Levi Johnston, Playgirl model, have announced their (second) engagement.

Apparently, the couple told Us Weekly before their own family, and Sarah Palin's official response -- "Bristol believes in redemption and forgiveness to a degree most of us struggle to put in practice in our daily lives" -- might give a cynical reader reason to believe that Mama Grizzly is still caught up in that "struggle" bit. The Washington Post's Reliable Source sees a ray of light in the announcement, however, and basically says: Who the hell else could they be with? "The two have shared a completely unique experience: Small town teens catapulted to worldwide fame through the convergence of an unplanned pregnancy and her mother's overnight political ascendance." But if being a co-conspirator in a media maelstrom were all it took to build a strong marriage, the Gosselins would be our most steady couple.

Bristol and Levi are just one of dozens of tabloid-ready couples whose lives we "know" far too much about. But the Gosselins and the Jolie-Pitts don't have a family member who regularly flirts with running for the highest political office in our country. And thus we betcha whatever path their private lives take will eventually be served back to us as a political narrative demonstrating good Republican family values.

Before the unfortunate demise of their relationship, Bristol and Levi were more or less toeing the Republican Party line on unplanned pregnancy: Condemn the premarital sex, but offer redemption to those who go on to have the baby, get hitched and make a proper family (hence the shotgun engagement on the eve of the Republican Convention). During the Bush years, as you may remember, this philosophy formed the backbone of the Healthy Marriage Initiative, which started from the premise that two-parent families tended, statistically speaking, to make more money and provide more stable homes for children, and thus decreed that the best way to make poor, unstable single parents into stable, affluent families was to marry them off to one another.

But as it turns out, things didn't quite work out the way they planned. Just last week, conveniently enough, Women's eNews ran a feature by Julie Marsh that concluded that marriage isn't exactly the magic pixie dust young parents are looking for. Yes, two-parent families may be, statistically speaking, more affluent than single-parent families, but married women also tend to be more educated in the first place. Encouraging poor parents with little education and few job prospects to better themselves by marrying each other just gives you a family headed by two poor, uneducated parents. Marriage might not hurt, but it is basically irrelevant: What that family needs is at least one person with a decent education and a good job. Plus, having money doesn't guarantee a good relationship. As one young mother told Marsh, "You can have a man that got a lot of money and do you dirty and that's not cool."

There's no rule that says young parents can't have both: a good marriage to the parent of their child, in which they mutually support each other's goals to finish school and/or come up with enough resources, economic and otherwise, to keep everyone reasonably happy and cared for. But in practice, all too often, when two people slap together an idealized family as the solution to an unplanned pregnancy, it just means that one or both partners (most often the mother) delay getting the education and work experience they need to support their family solo, a shaky proposition given that women who marry in their teens are much more likely to divorce.

How does this all apply to Bristol and Levi? People's lives don't willingly conform to statistical norms, so perhaps this particular marriage will turn out just fine. All those months of public vitriol might make an interesting addition to baby Tripp's scrapbook (file under: Parents' "youthful indiscretions"). Then again, it's possible that in not choosing to marry when Bristol's mother's political ambitions were the virtual loaded gun over their heads, they came to a better-planned, more thoughtful decision to be together. One might also point out that the "problem" many government programs, rightly or wrongly, seek to fix isn't necessarily young parents, but poor parents. And right now -- thanks to speaking fees, tabloid interviews and skin mags -- neither Bristol nor Levi is poor (though one presumes that the job security of "professional tabloid star" may turn out to be even more rickety than "child actor," and one positively cackles wondering what rules govern the allowable behavior between an "abstinence educator" and the father of her child in the weeks leading up to her wedding). If nothing else, consider it an experiment in the impact a decent speaker's fee can have on teen parenting.

Bristol and Levi's lives, of course, are their own, and as private citizens, I wish them well. Still, there is no getting around the truth that their private choices will eventually be served back to us as political parable. While I'm no fan of one-size-fits-all prescriptions, I'm still of the mind that a college diploma and decent job skills are a much better guarantee of young family's healthy future than a marriage license.