"Starve the beast" GOP not crazy after all

If the long-term goal is to break the government, Republicans have a winning strategy. Case in point: California 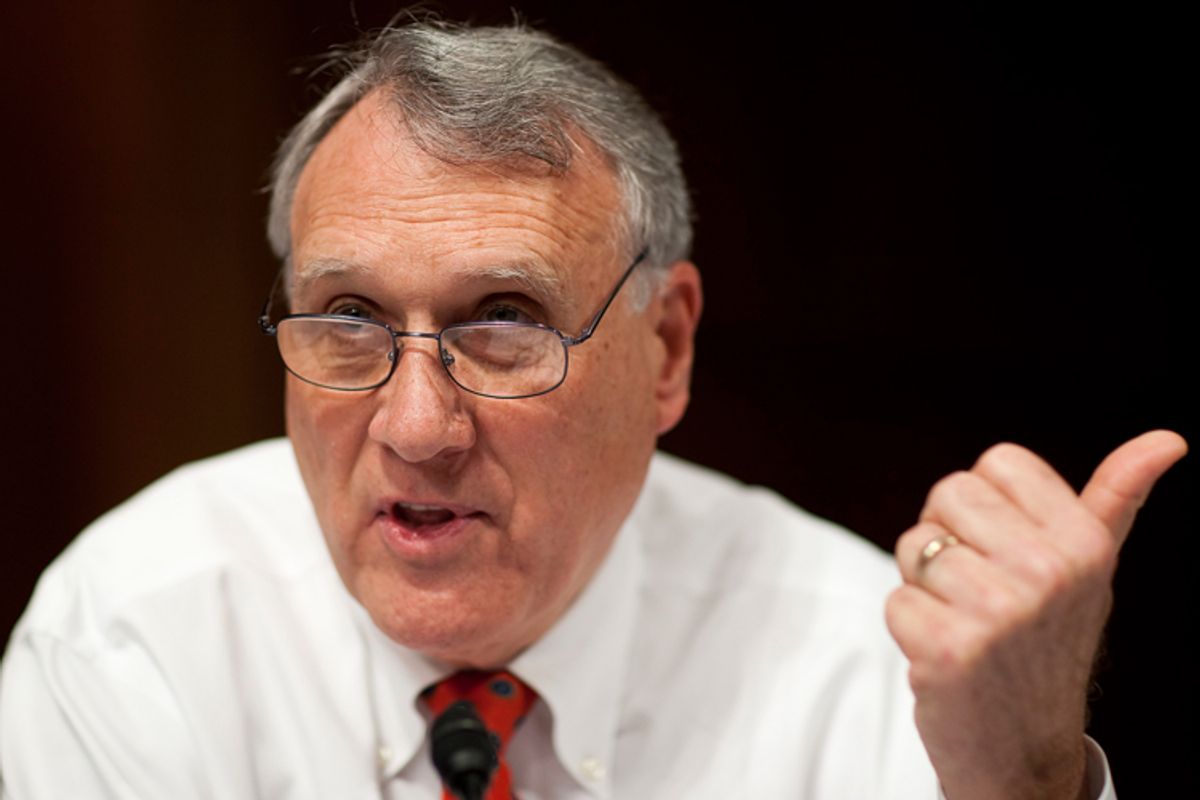 Bruce Bartlett, the former Reagan administration supply-sider who has transformed into one of the most forceful critics of Republican economy policy, provides a list of links to articles and academic studies today that he says proves that the GOP's beloved "starve the beast" strategy to reduce government spending just doesn't work.

The salvo of data and analysis are useful in the middle of a blogsopheric uproar incited by Arizona Republican Sen. Jon Kyl's comments over the weekend that tax cuts should never be paid for.

KYL: You should never raise taxes in order to cut taxes. Surely congress has the authority and it would be right, if we decide we want to cut taxes to spur the economy, not to have to raise taxes in order to offset those costs. You do need to offset the cost of increased spending. And that's what Republicans object to. But you should never have to offset cost of a deliberate decision to reduce tax rates on Americans.

The reference here is to George W. Bush's tax cuts, which blew up the Clinton-bequeathed budget surplus, delivered only a meager economic boost, and ensured that the federal government was already deep in the hole when a real economic emergency arrived. It's as clear a declaration that "deficits don't matter" as one could hope for from a senior Republican legislator.

Some of Bartlett's references make the intriguing case that starving the beast actually results in more government spending, because the connection between spending and the painful tax hikes necessary to pay for it has been severed. Tax cuts equal free money! Who doesn't like that? Whereas a balanced budget actually requires real sacrifice: real spending cuts or new taxes or a combination of both.

But decrying Republican "invincible ignorance" on the connection between tax cuts and deficits misses the point about what's going on here. We just haven't reached the endgame that determines whether starving the beast really works. But if California's experience is any guide, that day will come.

If you judge the point of "starving the beast" as a strategy not to cut spending, but to break government, it all starts to make sense. By making it essentially impossible to raise taxes in California on those most able to pay, conservatives ensured that when the state hit hard times, it would have no tools to deal with a severe downturn in state revenues. California is headed for another big budget shortfall this year, and there will inevitably be more cuts in state services -- particularly those aimed at the most vulnerable sectors of society, but also at the guts and sinew of basic government infrastructure -- schools, police, firefighters.

For the GOP, that's not a bug in the program, it's a feature! We haven't yet reached that point with the federal government, due to the fact that the U.S. can run a deficit, and California can't, in combination with the low cost at which the U.S. can currently borrow money. But if Republicans hold the line on no new taxes, and at the same time continue their pattern of decades of failure at making politically unpopular cuts in entitlement spending, the U.S. will someday reach a point at which it is no longer so simple to operate in the red. Borrowing costs will rise, threatening either severe inflation, or the requirement of real spending cuts.

And then the U.S. government will break, just like California has. In that scenario, "starve the beast" succeeds.