The U.S., Argentina and gay marriage 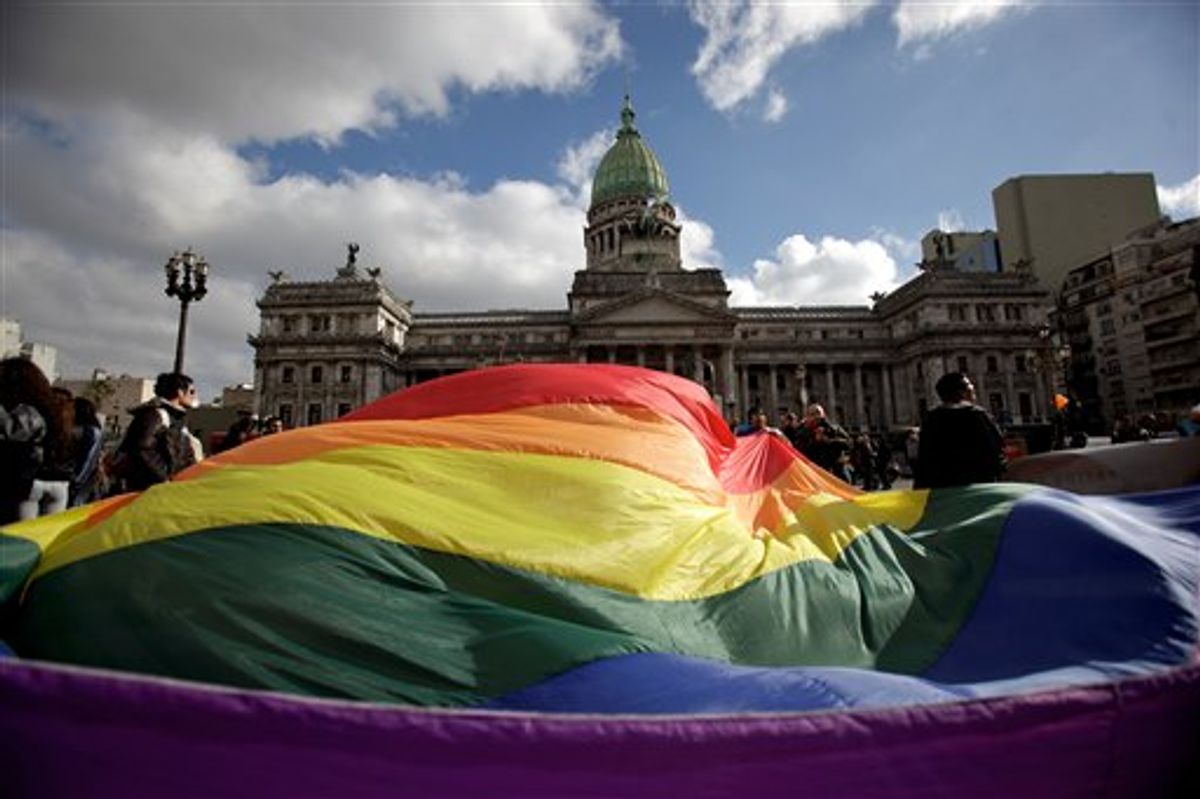 Demonstrators wave a gay pride flag outside Congress in support of a proposal to legalize same-sex marriage in Buenos Aires, Wednesday July 14, 2010. Argentina's House of Deputies has approved same-sex marriage and sent the legislation to the Senate, which is discussing its consideration Wednesday. President Cristina Fernandez promises not to veto the measure if it reaches her desk. (AP Photo/Natacha Pisarenko) (AP)
--

Argentina yesterday became the latest country to grant full and equal legal rights to its gay citizens, as the nation's Senate followed the lower house in approving a bill to recognize same-sex marriages.  Because President Cristina Fernández de Kirchner has vigorously advocated for the bill, it is now certain to become law.  Although Argentina is the first country in Latin America to recognize full-fledged same-sex marriages, numerous other nations in the region are inexorably marching toward similar equality:

Same-sex civil unions have been legalized in Uruguay, Buenos Aires and some states in Mexico and Brazil.  Mexico City has legalized gay marriage. Colombia's Constitutional Court granted same-sex couples inheritance rights and allowed them to add their partners to health insurance plans.

Argentinian politicians acted in the face of "polls showing that nearly 70 percent of Argentines support giving gay people the same marital rights as heterosexuals."  That's what is most striking here:  this is not happening in some small Northern European country renown for its ahead-of-the-curve social progressivism (though gay marriage or civil unions are now the norm in Western Europe).   Just as is true for Brazil, which I've written about before with regard to my personal situation, Argentina is a country with a fairly recent history of dictatorships, an overwhelmingly Catholic population (at least in name), and pervasive social conservatism, with extreme restrictions on abortion rights similar to those found on much of the continent.  The Catholic Church in Argentina vehemently opposed the enactment of this law.  But no matter.  Ending discrimination against same-sex couples is understood as a matter of basic equality, not social progressivism, and it thus commands widespread support.

The contrast with the U.S. is quite instructive and depressing.  Not only is the U.S. not close to nationally recognizing same-sex marriage, but we have a law -- the Defense of Marriage Act -- that explicitly bars the granting of any and all federal spousal rights whatsoever (including immigration rights) to same-sex couples.  Despite the election of a President who campaigned on a pledge to overturn that law, and overwhelming Democratic control of Congress, repeal of that law isn't even on the table.  The absolute most that is possible is a repeal of the unfathomably regressive ban on gays in the military, and the Obama-ordered granting of more spousal employment benefits to gay federal employees.  Virtually no national politician in the U.S. is even willing to advocate same-sex marriage, and those who advocate granting equal rights as part of "civil unions" refuse to take any real steps to bring that about.  Amazingly, it was only this year that the U.S. ended the repellent ban on HIV+ individuals from even entering the country, one of only 12 nations (a list largely comprised of some of the world's worst human rights abusers) to have continued it that long.

It's worthwhile now and then to take stock of the vast disparity between how we like to think of ourselves and reality.  When a country with Argentina's history and background becomes but the latest country to legally recognize same-sex marriage -- largely as the result of a population which demanded it -- that disparity becomes quite clear.