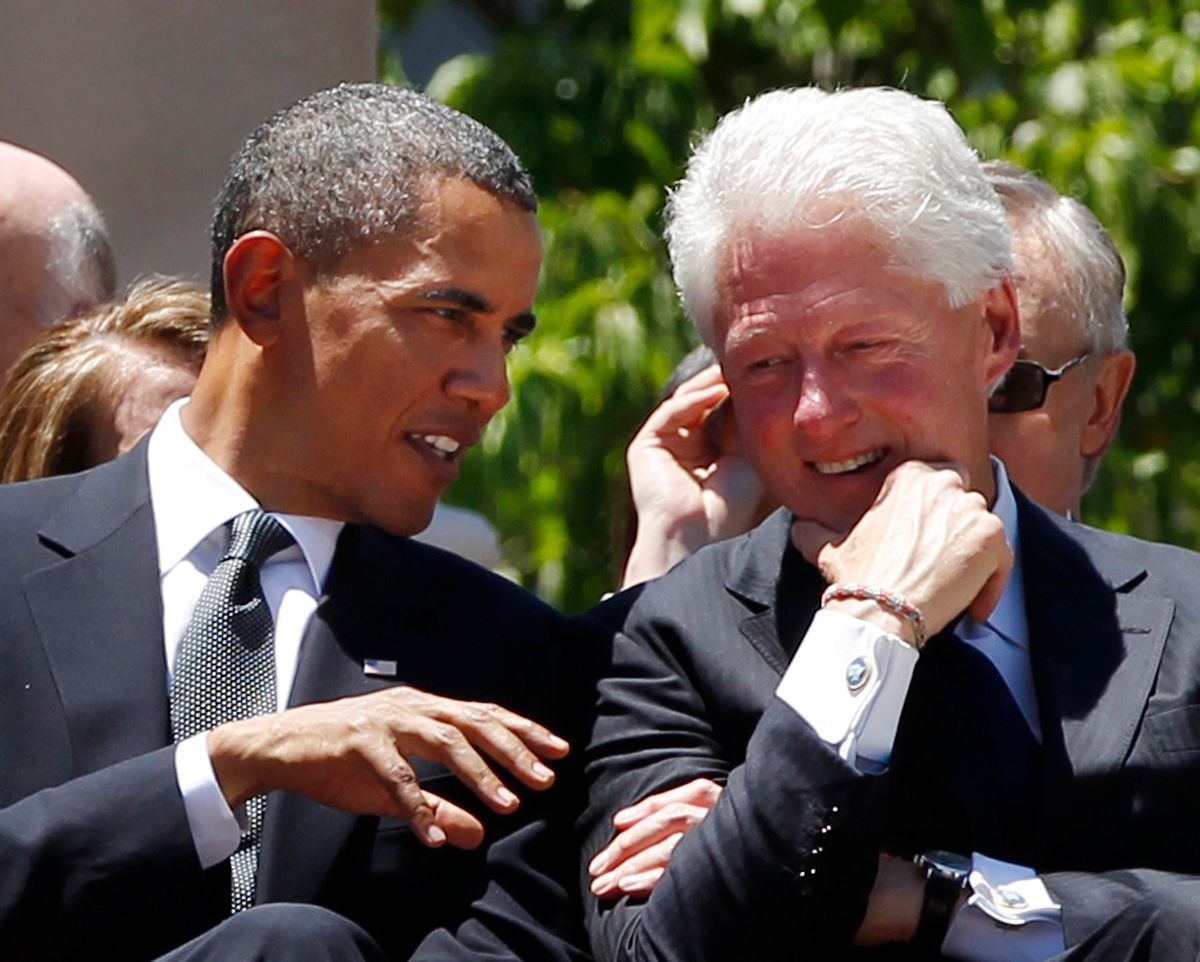 The Washington press corps that used to bash Bill Clinton reflexively (and still cannot always resist the same old impulse) is suddenly fixated on a different kind of narrative: the highly popular former president as political savior for the current president and his endangered congressional majority. Polling data shows there is  substance in that storyline, but many news organizations exaggerated the meaning of Clinton's meeting in the White House Wednesday afternoon with President Obama, other administration officials and a small group of corporate executives.

Depicted as an attempt to deploy Clinton to soothe corporate leaders who are furious at Obama, the Wednesday visit was actually devoted to a mundane subject: the energy efficiency loan guarantee program that Clinton has vainly tried to promote for many months as a source of fresh investment and as many as a million new jobs.

Back during the fall of 2009, Clinton directed the staff at his foundation to prepare a report explaining how the Obama administration could foster well over a hundred billion dollars of private lending for energy efficiency improvements in commercial, institutional and residential buildings. They found that as little as $9 billion in U.S. Treasury commitments to a Federal Energy Efficiency Loan Guarantee Program would leverage up to $67 billion in lending by banks for green retrofits.

In October 2009, Clinton sent a personal memo to Joe Biden, White House energy advisor Carol Browner and Obama economic advisor Lawrence Summers, telling them that in his opinion, the ratio might be as high as 10-to-1, with $15 billion leveraging as much as $150 billion. Every billion dollars invested in building efficiency creates as many as 9,000 new jobs in construction, design and manufacturing, which would swiftly add up to a million or more Americans rescued from unemployment.

Privately, Clinton spoke with dozens of Democrats on Capitol Hill and in the administration, trying to persuade them that a green loan guarantee might not only create new jobs but save theirs as well in the upcoming midterm elections. Yet despite the president's avowed commitment to clean energy and green jobs, the proposal made little headway until this week -- even as economists have urged the administration to unlock the enormous pool of capital that banks are refusing to lend.

Those business executives present at Wednesday's White House event weren't the Chamber of Commerce types that have attacked the Democrats over healthcare, financial reform and the federal deficit. (So the notion that Obama called upon Clinton to "mediate" his differences with the business community was pure media concoction.) Instead, they represented companies that could participate directly in the Clinton plan, including Bank of America CEO Brian Moynihan, Honeywell CEO David M. Cote, Hannon Armstrong CEO Jeffrey Eckel, Johnson Controls president C. David Myers, and Ameresco founder and executive vice-president Dave Anderson. Indeed, Johnson Controls, which builds and installs energy control systems and other efficiency equipment, is already working with the Clinton Climate Initiative to make the  Empire State Building a model of green retrofitting.

For Democrats, this was not merely an occasion for Clinton nostalgia, but a grim reminder of lost opportunities. Had the president and his staff heeded their old adversary when he started pushing the loan guarantee plan last year, they might not need his help quite as badly as they do today.