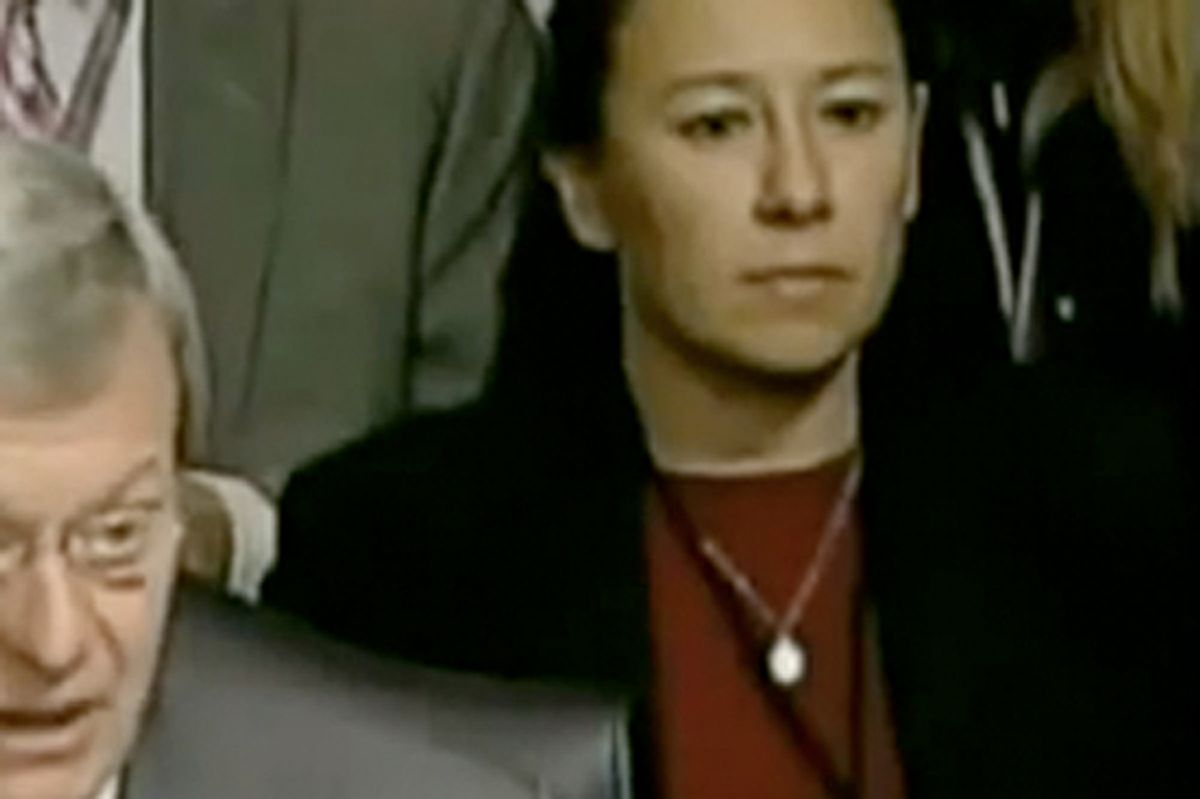 Beginning in 2001, Liz Fowler was the Chief Counsel for the Senate Finance Committee in charge of health and entitlement issues, i.e., legislation that primarily affected the healthcare industry.  As her own biography boasts:

In this capacity, she was responsible for overseeing health policy issues within the Committee's jurisdiction, including Medicare, Medicaid, SCHIP, health tax issues and initiatives to provide health coverage for the uninsured. She played a key role in the 2003 Medicare Prescription Drug, Improvement and Modernization Act (MMA).

Her work in that government health policy position was apparently quite pleasing to the healthcare industry because, in 2006, she was hired by the health insurance giant WellPoint to serve as its Vice President for Public Policy and External Affairs -- in other words, overseeing WellPoint's lobbying and other government-influencing activities.  Then, in 2008, once it was likely that there would be a Democratic President and thus a new, massive healthcare bill enacted, Fowler left WellPoint and returned to the Senate, as top aide to Democratic Sen. Max Baucus, the Senate Finance Committee Chairman who would oversee the drafting of the healthcare bill (Baucus's previous top healthcare aide, Michelle Easton, a former PhRMA official, left to become a lobbyist for the healthcare industry).  Now, as David Sirota noted last night, Fowler has a brand new job, as reported by The Billings Gazette:

Fowler, chief health counsel for the Senate Finance Committee, which Baucus chairs, will become deputy director of the Office of Consumer Information and Oversight at the U.S. Department of Health and Human Services.

In other words, implementation of the massive healthcare bill just enacted by the Congress will be overseen by a former high-level executive of the nation's largest private health insurer.  As Marcy Wheeler writes:  "It’s a nice trick: send your VP to write a law mandating that the middle class buy shitty products like yours, then watch that VP move into the executive branch to 'oversee' the implementation of the law."  Indeed, Fowler played a crucial role in shaping the healthcare bill to ensure there was no public option and to compel every single American to purchase the products of the private healthcare industry (including those of her former employer).  As Politico put it last year:  "If you drew an organizational chart of major players in the Senate healthcare negotiations, Fowler would be the chief operating officer."  It was Fowler who was literally writing the healthcare bills for Baucus which, at least at the time, progressives found so objectionable.

Fowler is the very embodiment of the sleazy Revolving Door and lobbyist-dominated politics which candidate Barack Obama endlessly vowed to subvert.  Remember all this?

Just watch the first minute or so of this Bill Moyers monologue from late last year on the role Fowler and Baucus played (the whole 5-minute clip on the influence of corporate money in politics is very worth watching):

What makes this hiring particularly ironic is that Max Baucus was the Chief Health Care Villain for most progressive healthcare reform advocates throughout last year.  Apparently, the Obama White House didn't agree, since they just hired his chief aide who coordinated everything he did.  Perhaps Russ Feingold was right when he said that the public-option-less, drug-importation-free, captive-customer-to-private-insurers bill which Fowler helped to engineer "appears to be legislation that the president wanted in the first place."

Needless to say, the hardest-core and blindest Obama loyalists are hard at work defending this hiring and smearing those who criticize it.  Watch here as they viciously attack David Sirota for highlighting this story by hilariously insisting that Fowler's work at WellPoint makes her "well-qualified" to implement the healthcare bill.  One of them accused me last night of using "guilt by association" in noting this hiring:  behold as what were once (during the Obama candidacy) noble and inspiring objections to "Revolving Door Politics" have now magically morphed (during the Obama presidency) into unfair and pernicious McCarthyite tactics (how dare you think someone should be disqualified from a high-level government position just because they recently worked as a high-level executive at the very industry they're about to regulate!).  Still other reflexive Obama defenders (including one who writes at Crooks & Liars) are engaged in their standard, false smear tactics spat at anyone who writes critically about their leader's actions, while -- most notably -- one former PhRMA official, John Michael O'Brien, echoed these Obama defenders by attacking Sirota for writing about the story and insisting that the noble former WellPoint VP is an ideal choice to implement the healthcare law.

In fairness, though, what else are they going to say?  This is an administration that almost employs more Goldman Sachs officials in financial and regulatory positions than Goldman Sachs itself does.  One of the first acts of Interior Secretary Ken Salazar was to hire a BP executive to serve as a deputy administrator for land and minerals management.  And now they've just hired to implement the new healthcare law someone who was just recently in charge of the lobbying and government activities of the nation's largest private insurer.  With a record like that, it's not really possible for them to pretend any longer that they oppose the "Revolving Door Politics" which the Obama campaign so vehemently scorned.

Yesterday, in The Washington Post, Katrina vanden Heuvel claimed that the pharmaceutical industry opposed the healthcare bill ("Missouri's Roy Blunt, among others, stood with the insurance and drug companies against health-care reform").  As Tim Carney documents, the opposite is true:  that industry emphatically supported the bill and undertook multiple actions -- including spending substantial amounts of money -- to ensure its passage.  That's an important fact to preserve.