FDR and Dwight Eisenhower had it before claiming the presidency. But Harry Truman didn't 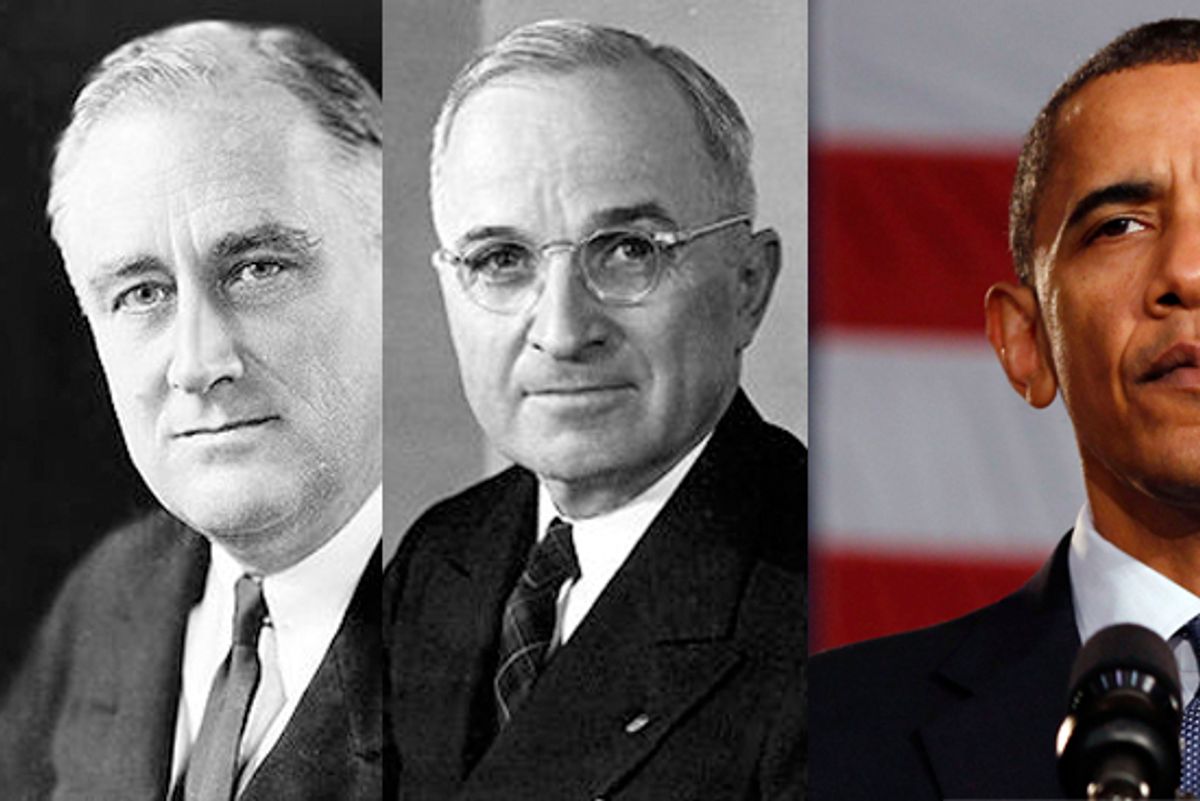 In his complaint about Barack Obama's failures on executive appointments, Brad DeLong says:

I think that the general rule in the future should be that nobody who has not served a full term as a state governor or managed a similarly large organization should be supported in any presidential run. FDR and DDE are certainly the class acts of the twentieth century.

Well, I agree that FDR and Ike were excellent presidents, but I also think Truman was an excellent president, and he had little or no executive experience. But since I have that Siena College survey on my mind, I figured I might as well do a quick test. I'll put the answer up front: there's not much of a difference, but what differences there are tend to suggest that legislators, and not governors, have a small advantage.

The details: I looked at the modern presidents, F. Roosevelt through Obama, because I really do think the job before that is different enough that I wouldn't expect the same qualities to be useful, especially when it comes to executive skills. I count George H.W. Bush as having experience, although it's a close call (and, as it turns out, it doesn't affect the results). The other V.P.s, however -- Truman, Ford, Johnson and Nixon -- I think have very weak cases for having executive experience. They're legislators.

And at any rate, as I've said, I think that the exact ranks here are really more of a parlor game than serious analysis; they do tell us something about presidential reputation, and if there was a huge gap I'd be interested, but there are a lot of oddities in the rankings, so I wouldn't pay too much attention to that result.

On the other hand, as those who read my obsessive presidential survey blogging may recall, Siena asks historians, political scientists and "presidential scholars" to rank each president on 20 different categories, including one that seems particularly relevant here: "Executive Ability."* Looking at it by itself is sort of pointless, because it generally tracks the president's overall rank (no Exec Ability rank is more than six removed from overall rank).** However, indexing it by comparing it to the overall rank may actually yield something pretty interesting. That is, knowing that Harry Truman's reputation is pretty high overall isn't all that interesting, and certainly that he ranks exactly 9th based on this particular set of respondents and this particular survey is really pretty useless. However, it seems somewhat more likely to me that one can really learn something by looking at Executive Ability in comparison to the rest of the rating. So we know that historians et al. like Truman -- and we can learn, perhaps, by his No. 8 rating for Executive Ability that they think that it was (slightly) relative strengths of his presidency.

And the answer is: Legislators seem to do a bit better on "Executive Ability" than they do on overall rank, while governors (and Ike) do a bit worse. The cumulative score for governors (rank - Exec Ability) is -7; for legislators, it's +4.

Is that something we should take seriously? Heh -- I have no idea. The two scores that are really helping legislators are for Nixon and Johnson, and I think those are awful results; I don't think "executive ability" was a strength for either of them. So perhaps the data are just not useful, after all. Certainly take it with a grain of salt. Still, one might suspect that if there was some sort of very large effect, the kind that would make DeLong's voting rule make sense in a contested primary, that it would show up here, or at least that the arrow would point in the correct direction. So I'm going to call this one against DeLong: plain blog advises you to feel free to support presidential candidates from any sort of background, as long as there's some good indication of mastery of politics and public affairs.

*There is a second category that appears to be relevant, "Executive Appointments." Unfortunately for the purposes of this study, all that category seems to reveal is a massive partisan bias: Republicans except for Ford all do badly on that one, and Democrats all do well. I don't really see a lot of heavy partisan bias in general in the survey, but it sure seems to be there on this one.

**There's a slight bounding problem; FDR is #1 overall in the Siena survey, which means that all of the component ranks must be either neutral or negative (that is, his Executive Ability can only be #1 or lower, meaning that by this method he counts as worse in Executive Ability based on his #3 rank in that category. I think it's safe to ignore, but I figured it's worth mentioning.