The new Emergency Committee for Israel has some familiar digs 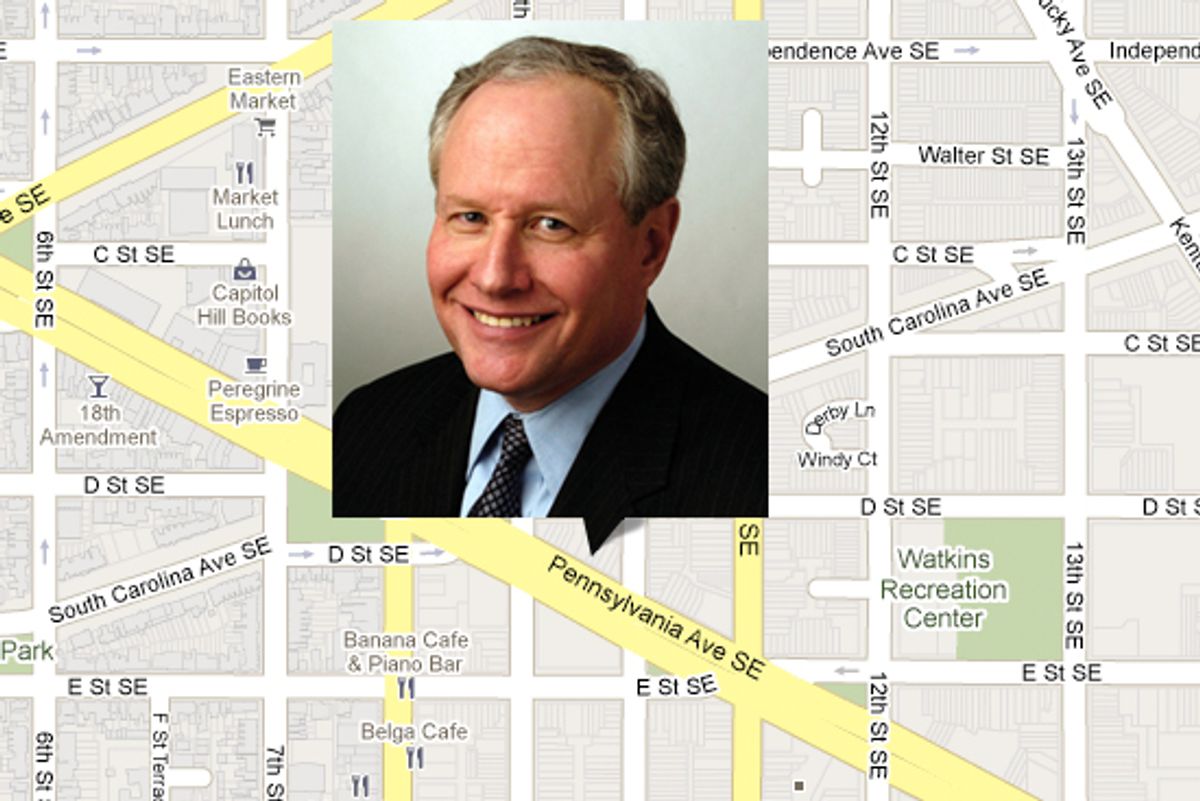 If there's a headquarters of neoconservatism in Washington, there's a good argument it's 918 Pennsylvania Avenue, SE.

That's where the new Emergency Committee for Israel -- the group that launched with a Politico feature and an ad calling Pennsylvania Senate candidate Joe Sestak a terrorist symp -- is currently operating. And it's the same building that was base for the old Committee for the Liberation of Iraq (the Iraq sign is even still outside, apparently).

The latter was the outfit, rememeber, that had a brief but influential run in the early 2000s providing an outside assist to the Bush Administration's push for an attack on Iraq. It included neocon luminaries like Bill Kristol (who is also on the board of the new Israel group), Richard Perle, and James Woolsey, along with senators like John McCain and Evan Bayh.

The evidence lies in a a letter from ECI’s executive director (PDF), Noah Pollak, to Comcast regarding the attack ad the group has been running in Pennsylvania. The letterhead bears the following address: “918 Pennsylvania Ave., SE · Washington, D.C. 20003.”

That address happens to be the same as that of Orion Strategies, a public-relations consultancy owned and operated by renowned GOP lobbyist Randy Scheunemann, who, in addition to serving as president of the CLI, has been retained since the 2008 elections as Sarah Palin’s personal — and Bill Kristol-approved — foreign-policy trainer.

Michael Goldfarb, who works at Orion and is an adviser to the Emergency Committee, told Salon in an email:

"They didn't exactly find the Rosetta stone there--I'm on the record as an adviser to ECI and its no secret that I work at Orion, where the Committee for the Liberation of Iraq sign is still proudly displayed on the front of the building. ECI will be opening an office next week, but given the urgency of our cause, getting an office sorted out seemed less pressing than exposing Joe Sestak's anti-Israel record."

(For the record, the Emergency Committee's website currently lists another address that appears to be at a UPS Store.)

Noah Pollak, a writer at Commentary and head of the Emergency Committee, did not immediately return a call for comment.

So what does all this mean? For one, it's a pretty striking illustration of just how small a world the still-influential neocon foreign policy community occupies. It's also a good reminder that the Emergency Committee for Israel is following  much the same low-budget, high-impact model that was used so successfully by the Committee for the Liberation of Iraq. It's a model that involves a very small staff and physical footprint coupled with the ability to get lots of free coverage from a hungry political media.

As for how much, or whether, neoconservative affinity for Israel played in the push for war with Iraq -- that's still a matter of much debate.