Goldman gets a slap on the wrist, and regular Americans will stay pay the price for Wall Street's mistakes 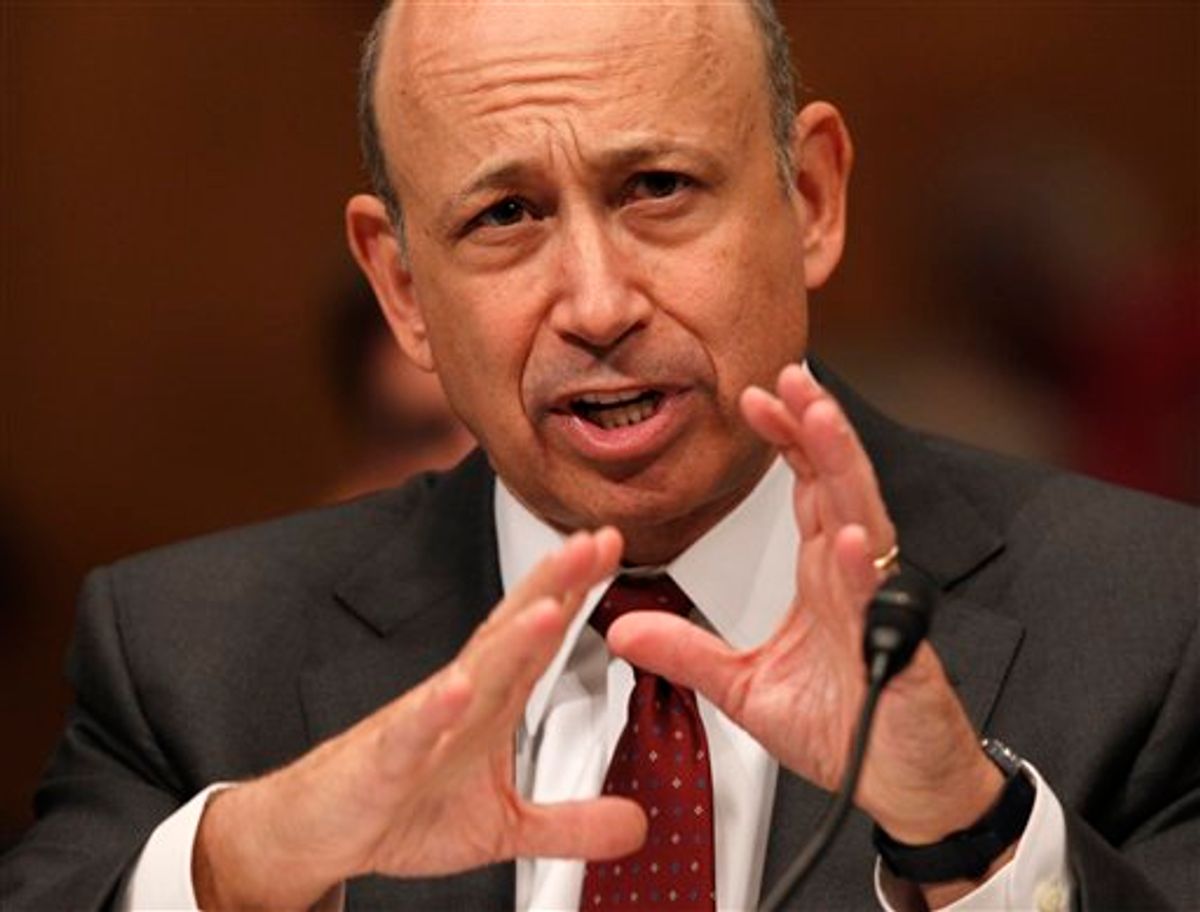 Thursday the President pronounced that "because of this [financial reform] bill the American people will never again be asked to foot the bill for Wall Street's mistakes."

As if to prove him wrong, Goldman Sachs simultaneously announced it had struck a deal with federal prosecutors to pay $550 million to settle federal claims it misled investors — a sum representing a mere 15 days profit for the firm based on its 2009 earnings. Goldman's share price immediately jumped 4.3 percent, and the Street proclaimed its chair and CEO, Lloyd ("Goldman is doing God’s work") Blankfein, a winner. Financial analysts rushed to affirm a glowing outlook for Goldman stock.

Blankfein, you may recall, was at the meeting in late 2008 when Tim Geithner and Hank Paulson decided to bail out AIG, and thereby deliver through AIG a $13 billion no-strings-attached taxpayer windfall to Goldman. In a world where money is the measure of everything, Blankfein's power and influence have grown. Presumably, Goldman can expect more windfalls in future years.

The American people will continue to have to foot the bill for the mistakes of Wall Street's biggest banks because the legislation does nothing to diminish the economic and political power of these giants. It does not cap their size. It does not resurrect the Glass-Steagall Act that once separated commercial (normal) banking from investment (casino) banking. It does not even link the pay of their traders and top executives to long-term performance. In other words, it does nothing to change their basic structure. And for this reason, it gives them an implicit federal insurance policy against failure unavailable to smaller banks — thereby adding to their economic and political power in the future.

The bill contains hortatory language but is precariously weak in the details. The so-called Volcker Rule has been watered down and delayed. Blanche Lincoln's important proposal that derivatives be traded in separate entities which aren't subsidized by commercial deposits has been shrunk and compromised. Customized derivates can remain underground. The consumer protection agency has been lodged in the Fed, whose own consumer division failed miserably to protect consumers last time around.

On every important issue the legislation merely passes on to regulators decisions about how to oversee the big banks and treat them if they're behaving badly. But if history proves one lesson it's that regulators won't and can't. They don't have the resources. They don't have the knowledge. They are staffed by people in their 30s and 40s who are paid a small fraction of what the lawyers working for the banks are paid. Many want and expect better-paying jobs on Wall Street after they leave government, and so are shrink-wrapped in a basic conflict of interest. And the big banks' lawyers and accountants can run circles around them by threatening protracted litigation.

Why do you think Goldman got off so easily from such serious charges of fraud?

Reliance on the discretion of regulators rather than structural changes in the banking system plays directly into the hands of the big banks and their executives and traders who contribute mightily to Democratic and Republican campaigns. The flow of money virtually guarantees that regulatory agencies won't be adequately staffed to enforce the law, that penalties for violations won't be overly onerous, and that all loopholes (what's a "derivative"? what has to be listed on exchanges? exactly how much capital must be on hand for which transactions? How are the various forms of predatory lending to be defined?) will be easily stretched in future years. Wall Street lawyers will have a field day. The profit-for-nothing sector of the economy (law, accounting, finance) will continue to grow buoyantly.

Make no mistake: As long as there's no fundamental change in the structure of Wall Street — as long as the big banks stay as big and are allowed to grow bigger, and have every incentive to invent new financial gimmicks with which to bet other peoples' money — they will remain too big to fail, and too politically powerful to control.

Goldman's share price, as well as those of JP Morgan Chase, Citicorps, Morgan Stanley, and Bank of America, will no doubt soar the basis of the final bill because their future profits are almost guaranteed. The pay of their executives and traders, and of the managers of hedge funds and private-equity funds they deal with, will likewise accelerate. In the short term the economy will benefit, at least to the extent financial entrepreneurship is now the apex of American wealth and innovation. But over the longer term we will be much weaker for it.

Congress has labored mightily to produce a mountain of legislation that can be called financial reform, but it has produced a molehill relative to the wreckage Wall Street wreaked upon the nation.