No more vacation: How technology is stealing our lives

E-mail and smart phones were supposed to liberate us. So why does it feel like we never have any free time? 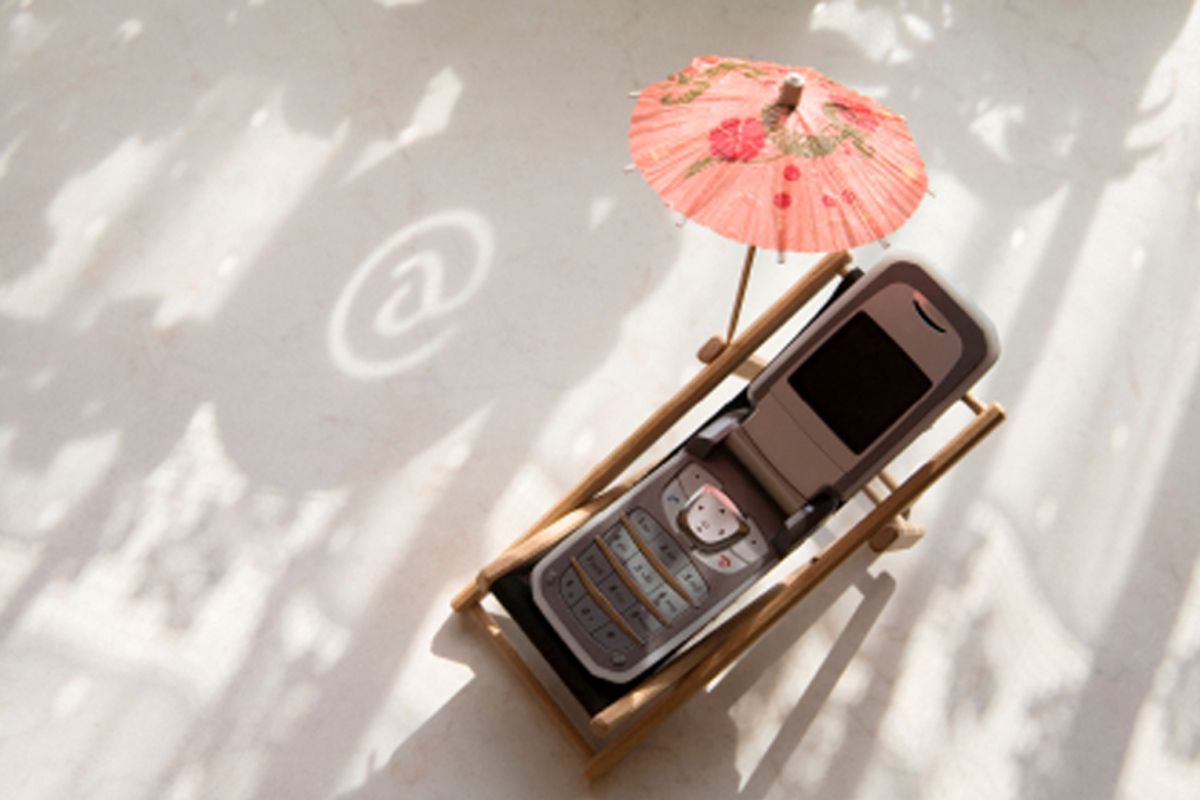 Friday before the 4th of July, my friend Sara and I walked to the local pool, talking about work stress, anxiety, difficulty relaxing. We were both struck by how lately, after 15 years of full-time work, we were so unreasonably tired. Why now, we wondered, when we have more experience and self-assurance, when we are amply compensated for our labor at comparatively cushy white-collar jobs, do we feel more spent than when we were strapped entry-level drones, running our tails off to please insatiable bosses? Why has our recent exhaustion felt so bone-deep and dire? Childless, we marveled at how our mothers managed kids and jobs, while we were so wrecked. As we entered the locker room, we were briskly reminded of the strict New York City public pool rules: no street clothes on the pool deck, no food or drink, no cellphones. Stowing our stuff in the cubbie above us, both of our hands paused in midair as I checked my phone and Sara eyed her BlackBerry nervously. As we headed out to the concrete and chlorine oasis, Sara said with an unconvincingly nonchalant laugh, "I hope nobody's looking for me." It was late afternoon before a holiday weekend, I assured her. But I quietly worried that an associate I'd been playing phone tag with might leave a message. If I didn't return it till later that night, would she surmise that I wasn't working?

This, I realized after one lap in the bracing blue water, is why we are so tired.

There's been a lot written about how the beeping and flashing gadgets with which we now surround ourselves keep us from sleeping, keep us from concentrating, keep us, ironically, from working. The thing that I have noticed of late is how often they seem to keep us from living.

Perhaps I’m feeling a loss of leisure so keenly these days because of my romanticized (but real) memories of summer days from not so long ago. Not just the ones in which I was a kid on a three-month vacation, but in which I was the daughter of parents who came home from their jobs at night and were at home, who cooked dinner, or maybe drove us to a movie or watched television or read a book without so much as a glance at a Palm Pilot or an e-mail in box. It's not that my academic parents didn't work overtime: They often read, graded papers and caught up on administrative work late into the night. But that extra work was done on what was once generously regarded as "their time." They found ways to fit it in around hours or days during which their colleagues or superiors had no idea where they were, in which they were unreachable and there was no notion that they should be otherwise.

Those rusty memories are decades old, but even as recently as 12 summers ago, while I tried to keep my head above water at my first job, my legendary and demanding boss would, at some magic moment on a Friday afternoon, disappear to her country house, where she could be reached primarily by an unreliable fax machine. She was gone for the weekend.

Earlier this month, on my honeymoon in California, I found myself checking my computer compulsively for days, not for fun, but because I was afraid of being professionally remiss. It was simultaneously an irrational and a perfectly sane concern: Every day did bring some new professional demand or question that supposedly could not wait, though I also answered the ones that obviously could. Halfway through the trip, my brain began to ease into vacation mode and my typing fingers stopped twitching. As soon as I recovered myself a bit, I also recovered some perspective on the vortex into which I'd been pulled. I'd catch sight of my innocent white Mac sitting on a hotel room desk, suddenly less a seraphic emissary of important information than a sinister conveyor of work stress. What will you want from me today? I’d wonder as I stared it down. What anxieties lie waiting within you?

We have created a monster that is consuming us. And I don't mean that "the Internet is bad" in that hypocritical and falsely ascetic way. I mean that we, along with the phones that travel with us, the texts we type in movie theaters, the instant messages we receive now even on some planes, the social media many of us are expected to participate in on behalf of our jobs, and the complexes and work ethics we have all inherited from our diverse array of guilt-generating forebears, have bubbled together into a frenzy of ceaseless professional engagement that is boiling us dry.

It's certainly a first-world problem, a privileged concern. In so many ways, the Internet has been a democratizing force, has made our lives so much easier. In most of the world, cellphone technology doesn't weigh people down; it gives them an opportunity to make a living.

But those disparities of experience don't change the fact that in certain sectors, not just the one I inhabit, technology is allowing our work to eat our lives. In Canada, labor leaders have pushed to make employers pay for the hours workers spend on their BlackBerrys out of the office, and in the United States,  lawsuits to recoup overtime pay for time spent on hand-held devices are piling up. Perhaps making bosses pay for out-of-office texting time will be just the thing to get them to discourage it, but I fear that irreversible shifts in attitude and metabolism make this an unlikely hope. Professional rhythms have quickened to match technological possibility in ways that make resistance futile.

I don't own an iPhone or a BlackBerry because I do not want to receive e-mail all day every day. Increasingly I understand this preference to be naive, impractical and really rather twee. On several occasions in the past year, days when I've run between appointments and not brought my laptop, I've had to call my boyfriend to ask him to log into my e-mail and tell me whether I've missed anything urgent. I should get a smart phone because I live in the real world. And in the real world, where I used to receive a few dozen e-mails a day, I now receive hundreds.

During a recent visit from a cousin, we ran out to do errands and get lunch, realizing only once we'd gone too far to turn around that she had accidentally left both of her BlackBerrys in my apartment. After a brief panic and a strong Bloody Mary, she confessed that the 120 minutes she'd just spent without her PDAs was the longest period of technological unavailability she'd experienced in years. As soon as we walked back in the door, she rushed to catch up on the scores of work exchanges she'd left unfinished. My cousin is a primary school principal. This was a Saturday in July.

I don't think the notion that we have to be constantly plugged in is just in our heads: I think it's also in the heads of our superiors, our colleagues, our future employers and our prospective employees. There will be judgment, or at least a note made, perhaps by a boss who's tried to reach you unsuccessfully, or an employee who has an urgent question that goes briefly unanswered.

To not be reachable if called upon at any time, except perhaps the dead of night, feels sinful; unavailability betrays disconnectedness, and disconnectedness has come to stand for idleness and indolence. How many people have sent needless e-mails at 7 a.m. or perhaps 11 p.m., with the thought, if not the conscious intention, of communicating an intensity of professional commitment, demonstrating defensively or passive-aggressively or in the hopes of beating the next round of layoffs that they were beavering away at every odd hour of the day and night.

America's excesses are never far from sight: Our endless enthusiasms for boundless capitalism, materialism and hedonism persist. But these three have always had a complicated but close relationship with their uptight buddy, Puritanism, and I can't help feeling these days like Cotton Mather and Jonathan Edwards have insinuated themselves into everyone's friends and family network, preaching the gospel of a work world without end.

Without retreating to some heretical call to smash the machines, I wonder if it wouldn't do us all some good to stuff them all in a locker for an hour and go for a swim.