"Valhalla Rising": What to see instead of "Inception" 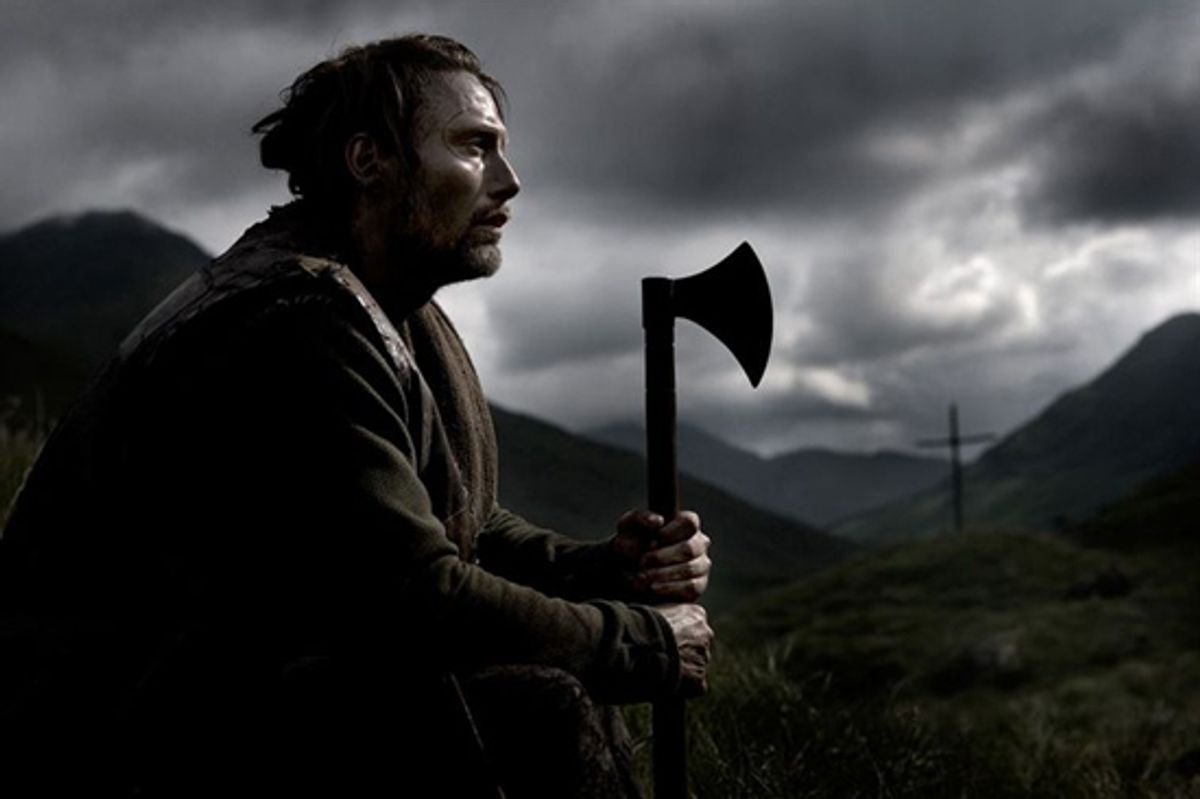 One of the reasons I had this week marked with a gold star on my 2010 movie calendar was of course Christopher Nolan's "Inception," no doubt the most newsworthy event of the Hollywood summer. Even more intriguingly, that auteurist labor of love -- and whether you like it or not, "Inception" is clearly that -- is opening opposite another one, eccentric Danish director Nicolas Winding Refn's hallucinatory Viking odyssey "Valhalla Rising."

This makes for an irresistible compare-and-contrast between two extraordinarily talented mid-career cinematic visionaries, starting of course with the fact that Nolan's movie will have 1,000 times the audience, at a very conservative estimate. (It could be 10,000 times, or 100,000.) "Inception" is largely set inside the world of dreams, which look like conventional Hollywood action movies. "Valhalla Rising" is set in the real world of medieval Britain and North America, at least nominally, but plays from beginning to end like a feverish nightmare.

"Inception" is nothing if not calculated, and while I didn't like the movie that much I don't actually mean that as a dig. Nolan is trying to push at the outer edges of blockbuster possibility, while still ensuring he packs the multiplexes deep into next month and makes a profit for his investors (who are in for a reported $200 million or so). Refn has tumbled out of the Viking longboat in the opposite direction; I assume he wants people to watch his movies or he wouldn't keep making them, but based on his erratic career to date he doesn't give a crap about commercial considerations and couldn't make a pop movie -- at least not on purpose -- to save his life.

Arguably Nolan and Refn are both trying to split the difference between action movies and art-house or independent cinema. But Nolan's goal is to blend the two to produce smarter-than-average mass entertainment, while Refn erases the distinction in a fashion that seems perversely devoted to driving both constituencies out of the theater. The closest he's ever gotten to a hit remains his 1996 debut "Pusher," a sharply observed melodrama set in the grimy criminal underworld of Copenhagen. Eventually he expanded that film into an increasingly dark and grotesque trilogy, but not until after his Hollywood detour with the 2003 John Turturro thriller "Fear X," one of those debacles that grading-on-a-curve critics like me call an "intriguing failure."

After the "Pusher" trilogy, Refn made a Miss Marple film for British television -- I haven't seen it, but it's hard to imagine a weirder combination of director and subject -- and then moved on to the dazzling, ultraviolent black comedy "Bronson," in which he tells the story of a legendary British convict in an arch, frame-breaking style derived (Refn says) from avant-garde filmmaker Kenneth Anger. I thought "Bronson" was terrific, but it's a movie designed to have almost no audience: Let's take an amoral, testosterone-drenched prison story and tell it as a campy, super-gay art film. The people who like one side of that equation won't like the other one -- or at least won't want to admit it.

Over the last four or five years Refn has been plugging along on "Valhalla Rising," which offers spectacular widescreen images of British and American wilderness (I think it was all shot in Scotland) and a completely silent performance from Refn's "Pusher II" star, Mads Mikkelsen (also the villain in "Casino Royale"), whose one-eyed, tattooed gladiator is so badass he makes Clint Eastwood's Man With No Name look like a Filipino lady-boy.

In the first and arguably best part of the movie, you wonder whether "Valhalla Rising" is going to have any dialogue at all, or any real story. One-Eye is the battered but undefeated fighting slave of some second-rate tribesmen, somewhere in Britain, who put him up against all comers in competitions for food, booze, women, gold or whatever's available. Lots of movies about the Middle Ages can do the mud and blood -- though we sure see a lot of both here -- but in this movie it's like Refn has ripped you out of time and dropped you there. There's no story because, well, there was no story: You stayed alive as long as you could, any fucking way you could, and that was it.

After One-Eye seizes the chance to kill his captors and escape, leaving alive only the boy of 9 or 10 (Maarten Stevenson) who's been feeding him, Refn does launch upon a narrative of sorts, even if I kind of wish he didn't. This is the movie in which we learn exactly how the Vikings discovered America, circa 1000 A.D.: They did a lot of acid, got all hopped-up on Jesus Christ, and took a wrong-way boat they thought was headed for the Holy Land. No, I don't think Refn is seriously suggesting this as an alternative to the normal historical version involving Leif Erikson and the Vinland Sagas and all that. He's partly suggesting wild thought-experiment possibilities -- wouldn't it be cool if they thought the people shooting arrows at them were Arabs? Or demons? --and partly just building a trail of red herrings to support his hallucinations, dream sequences and scenes of madness and violent death.

In an interview with Bilge Ebiri at IFC.com, Refn says that "Valhalla Rising" is partly inspired by Andrei Tarkovsky's "Stalker," a notoriously impenetrable film that establishes a science-fiction-flavored premise before settling into a steady state of ambient spiritual mind-fuck. That comparison helped me understand this movie better, at least in the sense that I'm not supposed to understand it, that it's a fugue-state meditation on the medieval encounter between Europe and America rather than a comprehensible yarn that travels from a beginning to an ending.

Part of me still wishes and hopes that Refn will get the opportunity to make something on the scale of "Inception" -- but then, it's not my $200 million. (Nolan could definitely stand to make something with the modest scale, not to mention the total fearlessness, of "Valhalla Rising.") It's not as if he hasn't been noticed; Refn is supposedly making a vehicle-based action film called "Drive" with Ryan Gosling, a "Thai-boxing western" that may star Mikkelsen, and something called "I Walk With the Dead." (Oh, and "Pusher" is being remade. In England. As a Bollywood movie.) He's even been rumored as a possible director for a Hollywood "Wonder Woman" picture, which by any reasonable standard is a terrible idea. When it comes to this ridiculously talented and headstrong filmmaker, I'm happy to chuck reason out the window and hope for the best.

"Valhalla Rising" is now playing at the IFC Center in New York, with more cities to follow. It's also available on-demand via IFC In Theaters, on many cable-TV systems.