Waist-high sea grass and blustery winds make this more than just another genteel croquet match. It's an adventure 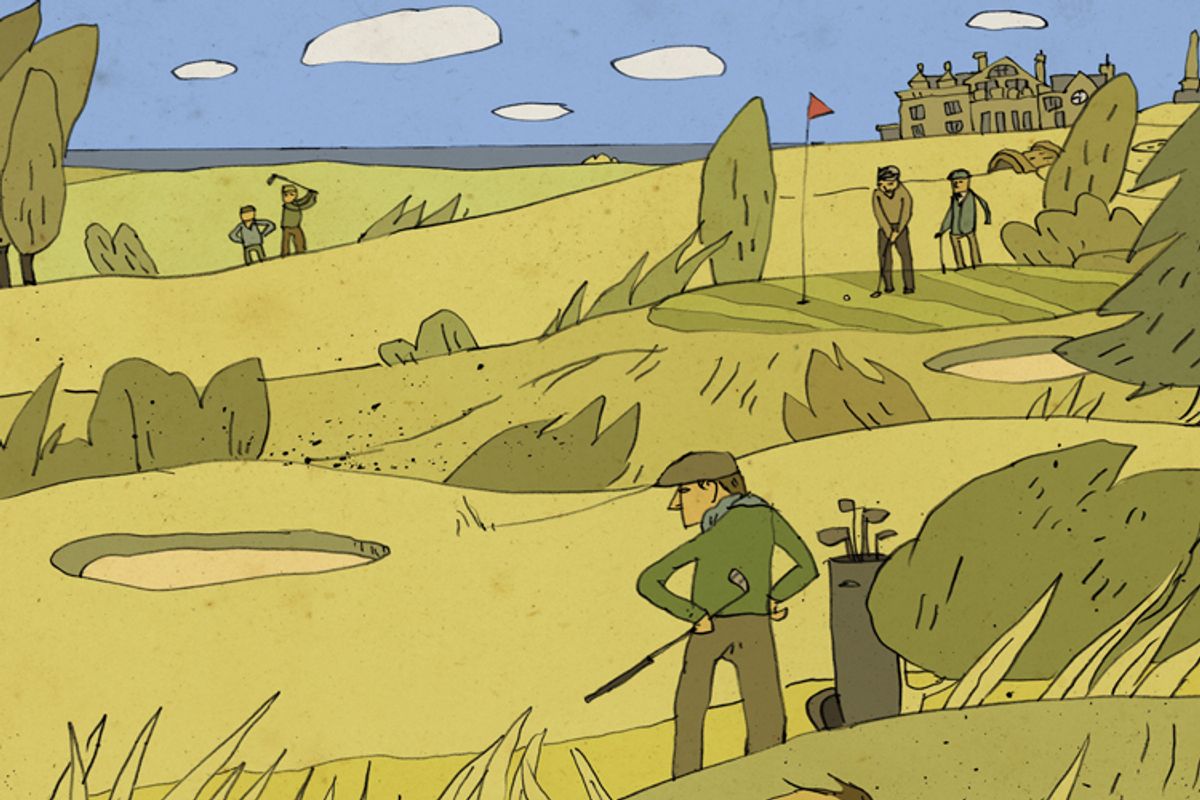 At 4 a.m. on Thursday during the 139th British Open, six hours behind St. Andrews in the pre-dawn silence of my Austin home, I tiptoed through a sleeping house of golf agnostics to renew my favorite summer ritual.

With the delight of a child expecting Santa, I fired up the glorious high-def orgasmatron at a volume audible only to our border collie. Then I sat in contented awe at the ESPN images of waist-high blond sea grass billowing across our game's Holy Land.

No sight in golf, not Pebble Beach's crashing surf, nor Augusta's heaving fairways groomed like a poodle's butt, quickens my heart like the first televised moments of what over there we must properly call the Open Championship. Watching golf's greatest major in the quiet dark reminds me of watching Neil Armstrong land on the moon in black and white. It feels so distant and foreign, almost of a different time, and so unlike our game in the States.

For starters, their open is not a genteel croquet match. In good years, with an angry ocean beside them, players limp off 18 like Vikings returning from the hunt.

I love to hear the flagpoles at the open clanging in the gales. We have some stout wind here in Texas, but we don't have to anchor our children for fear they'll be sucked into the North Sea.

How does any mortal golfer even sniff par in such brutality? I always marvel that Scots like Paul Lawrie, who won the Carnoustie debacle in 1999 after playing a lifetime in wind that would frighten Chicago, don't come to our girly-man country clubs in America and shoot 59s with their eyes closed. It might have something to do with our upholstered putting surfaces, but it could also be our sodden skies.

Unless you have experienced Scotland's radiant high latitudes — St. Andrews sits about even with Goose Bay, Newfoundland — it's difficult to appreciate the vibrant quality of sunlight and air at such monumental links as Cruden Bay, North Berwick and Machrihanish.

I've seen hardened pro photographers all but weep like Sean Connery when describing how their work leaps from the lens over there. I have sat on the stone steps of the Royal & Ancient Golf Club for hours at a time, mesmerized simply watching the sky above the first and 18th holes at St. Andrews go from Cancún blue to seething mountains of coal, then back again. Scotland's summers are grand theater. (We'll not discuss the rain just now.)

Its luminous storybook towns seem backlit by Hollywood. Rows of red and green pubs — now finally smoke-free — stand in the pristine morning light like new boxes of Crayolas. Freckled kids with names like Tavish and Tyra seem to glow on the way to school. It's enchanting and half-spooky to those of us trapped in dingy urban air most of the year. When the sun shines in Scotland, it's like the whole country is in high-definition.

The British Open is often played in a true golf village, a wee dip in the road like Gullane (population 3,700, next to Muirfield) that might vanish were it not for eons-old dunesland between the ocean and the farms that some genius architect like James Braid or George Lowe Jr. turned into a golf sanctuary. I've been to high school basketball games that had more people than some of these legendary golf company towns.

On one of my first journeys to Scotland, I teed off at Gullane's revered championship course, known to locals simply as No. 1, and to my dumbfounded glee, a young mother, well within her rights, crossed directly in front of the tee box down a communal path with her baby stroller.

"Splendid day for the golf," she chirped to our enchanted group of Yanks.

We waved and smiled as if we were at a Macy's Thanksgiving Day Parade, giggling at the thought of the SWAT-team response such a trespass would have caused at a private American golf cathedral. Such scenes are commonplace throughout Scotland and Ireland. Many of the world's consensus top 10 links courses are not only open to the general public, unlike our Oakmonts and Seminoles, but their trails and dunes are also shared with joggers, surfers and mums on a stroll. That helps to remind us golfers that, technically, we don't yet own all of nature.

Over there golf is more deeply woven into the local culture. You see happy mall-deprived teenagers walking to the courses with golf bags over their shoulders. In Ballybunion, Ireland, I once stood in a grocery check-out line and listened to two middle-aged women fervently discuss their golf grips. (Cue the ad team from Viagra.) Despite the efforts of clueless barons like Donald Trump, who is intent on Americanizing Scottish golf and importing his valet-parking culture, golf remains for most Scots an unpretentious game that knows its place.

The tournament itself is, of course, brilliant — from the singsong introductions by the beloved starter, Ivor Robson, to its fabulous rota of links courses and the eternal quirkiness of evil burns and pot bunkers, to the glorious charges and inevitable flameouts of nondescript golfers like Van de Velde, who come within steel millimeters of touching golf immortality … then disappear.

I care little about which major has the most worthy champions or finest fields. That's not why I wake with the roosters to watch the British Open. Actually, I think I might love this major the most because it seems that overlooked golfers who rarely play on a world stage somehow find their inner giant here and flirt with greatness.

That's good for golf, and the wise Scots would have it no other way.

Bruce Selcraig, descended from Scots, is a former writer with Sports Illustrated and lives in Austin, Texas.

Bruce Selcraig, descended from Scots, is a former writer with Sports Illustrated and lives in Austin, Texas.