This week in crazy: Whoopi Goldberg

"The View" co-host claims Mel Gibson can't be a racist -- he's been to her house! 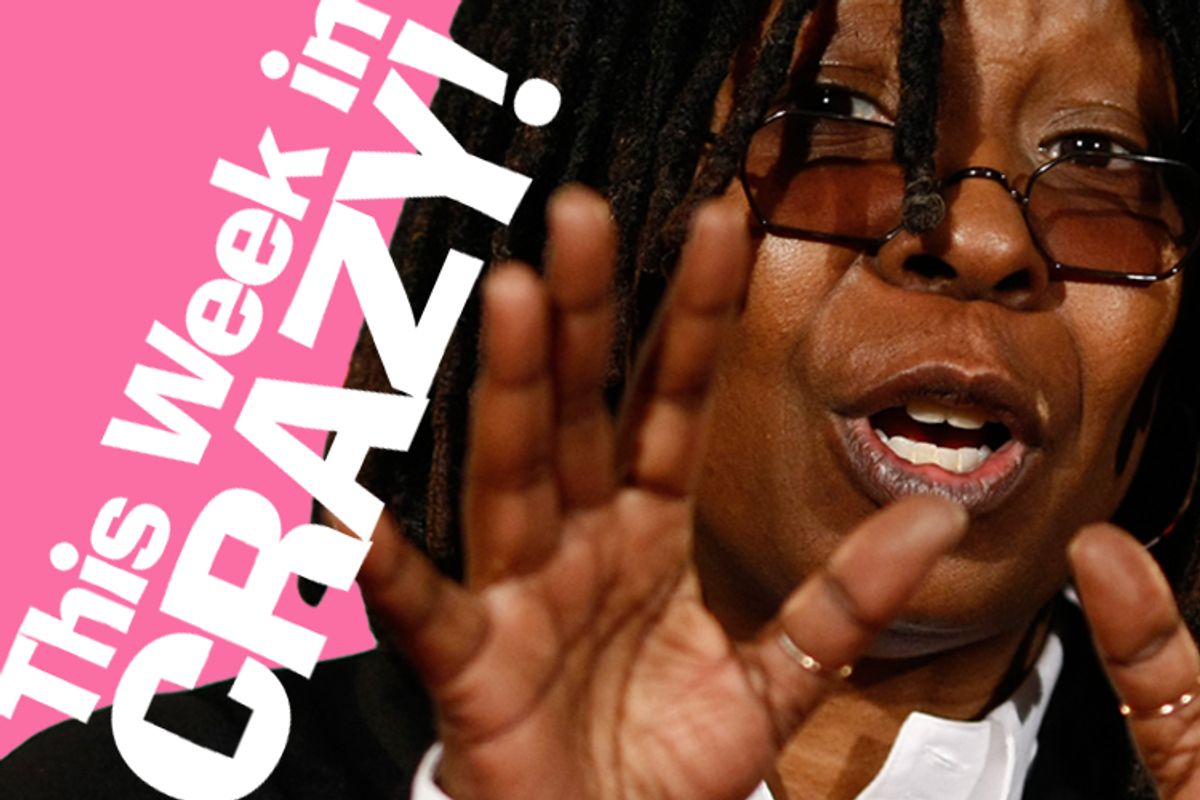 Did you hear that Mel Gibson's not a racist? He's just a "bonehead!"

So reconsider those remarks attributed to him on those colorful tapes, the ones about "niggers" and "wetbacks." And while you're at it, think again about his comments, upon his 2006 DUI arrest, about the "Fucking Jews ... the Jews are responsible for all the wars in the world." Or his rather casual reference, a few years back, to the Holocaust as "a numbers game." His diagnostician, Whoopi Goldberg, is here to explain it all away.

Monday on "The View" (which is having a banner week for crazy in the Team Division), Goldberg copped readily to Gibson being "an asshole" and said, "I don’t like what he's done. Make no mistake." She also firmly stated, "I know Mel, and I know he's not a racist. I can't sit and say that he's a racist, having spent time with him in my house with my kids." She furthermore chalked up his earlier anti-Semitic remarks to the fact that "Drunks say stupid stuff to people all the time because they're drunk." So if you've ever been drunk and forgot to blame the Jews for all the wars in the world, maybe you were doing it wrong.

On Wednesday, as the media shit storm caused by her comments hit its highest pitch, she defensively explained herself further, saying, "I don't condone this ..." and adding, "Being a black woman, you'd think you would give me a little bit of leeway to have some feelings if I was around a racist." She certainly has a fair case for going off on the anonymous dillweeds who got mad about her remarks without hearing them in full. But might we humbly suggest that a person who once defended her boyfriend's epithet-strewn blackface routine may not have the world's most finely tuned ear for racism?

Had this been the first time the Oscar winner had backed a rather dubious horse, we might let it slide. Yet isn't this the same lady who said what Roman Polanski did wasn't "rape-rape"? The one who has "questions" about the moon landing? Who confessed on Friday's episode of "The View" that she "just murdered" her new iPhone? "I opened the car door. I took it. I said, BAM!" OK, that last one makes complete sense.

Standing by her friend while most of Gibson's Hollywood circle have been busily adding extenders to their 10-foot poles is perhaps a laudable show of compassion toward a troubled person. Then again, to listen to those tirades and conclude that the person behind them -- who did not merely blame his girlfriend should she get raped but also specified that it would be at the hands of "a pack of niggers" -- is anything but racist as all hell is inconceivable, no matter how many times the alleged speaker has hung out at a black woman's home. Whoopi's right that Gibson's an asshole. He also appears every inch a racist. But Goldberg? She's just plain crazy.

Mel Gibson This Week In Crazy