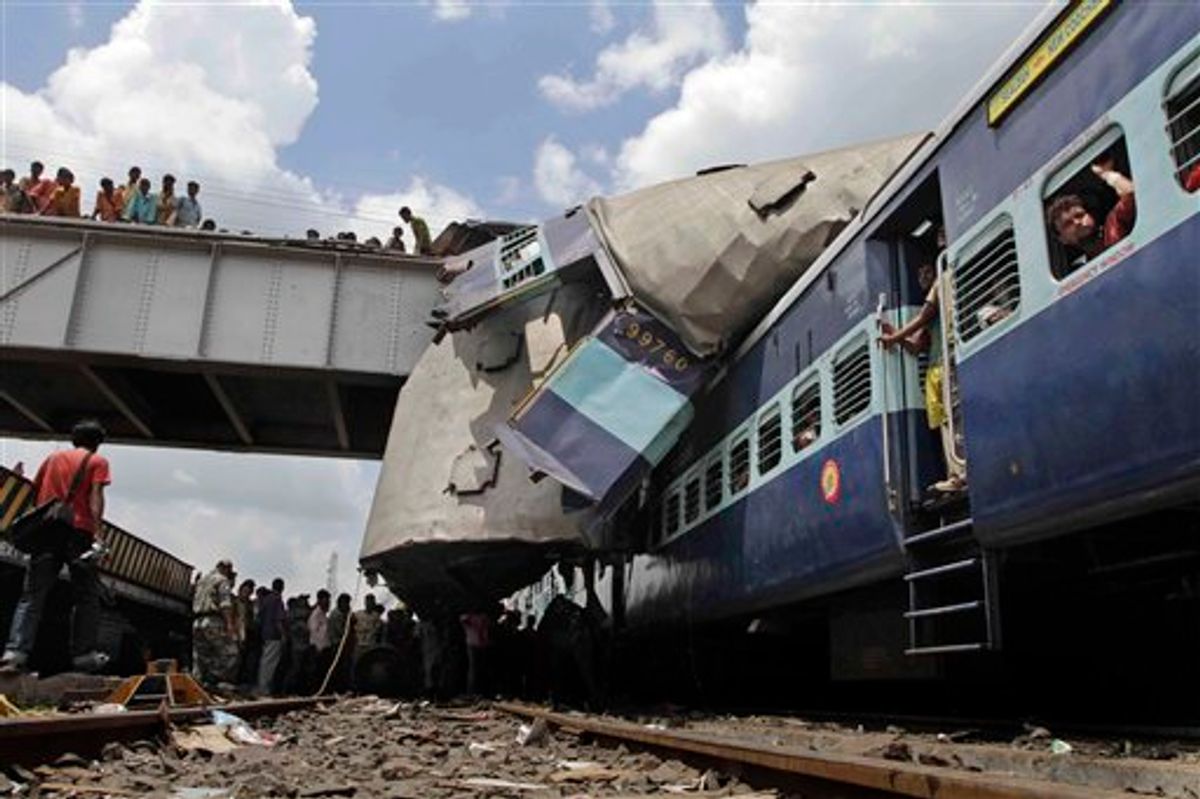 The roof of Uttarbanga Express's passenger car sits on top of Vananchal Express as rescue workers search for survivors at the site of an accident at Sainthia station, about 125 miles (200 kilometers) north of Calcutta, India, Monday, July 19, 2010. The speeding Uttarbanga Express train collided with stationary Uttarbanga Express at the station in eastern India early Monday, mangling the carriages and killing scores of people, railway police said. (AP Photo/Bikas Das) (AP)
--

A speeding express train plowed into a stationary passenger train in eastern India on Monday, killing 61 people in a crash so powerful it thrust the roof of one car onto an overpass. Officials said they could not rule out sabotage.

Residents crawled over the twisted wreckage trying desperately to free survivors before rescue workers arrived with heavy equipment to cut through the metal.

Railway Minister Mamata Banerjee, who rushed to the site, raised the possibility the crash could have been another case of sabotage, two months after Maoist rebels were blamed for a derailment that killed 145 people.

"We have some doubts in our mind" about whether it was an accident, she said.

The crash happened about 2 a.m. when the Uttarbanga Express slammed into the Vananchal Express as it left the platform at Sainthia station, about 125 miles (200 kilometers) north of Calcutta.

The accident destroyed two passenger cars and a luggage car, turning them into a tangle of twisted metal. The passenger cars were reserved for those on the cheapest tickets and such carriages are usually packed to capacity.

The force of the crash was so intense the roof of one car landed on an overpass above the tracks. Local residents climbing through the debris searching for survivors were later joined by rescue workers using heavy equipment to cut through the metal.

"I was sleeping when I felt a huge jolt and heard a loud noise and then the train stopped," passenger Lakshman Bhaumik told local television. Bhaumik survived with minor injuries.

Rescuers recovered 61 bodies from the crash site and 125 other people were injured, said Surajit Kar Purkayastha, a top police official. The two drivers of the Uttarbanga Express were among the dead, Banerjee said.

Rescue teams arrived about three hours after the accident, a local resident said. Before that locals scrambled to help survivors out of the trains and to pull out bodies.

"For many hours it was just the local residents helping and it was very difficult to help without any equipment," the unidentified man told NDTV television channel.

Police official Humayun Kabir told NDTV, however, rescue workers reached the site within an hour of the crash.

By late Monday afternoon, rescue operations were nearly complete, said Samir Goswami, a railway spokesman. Cranes and laborers were working to remove the mangled coaches so the tracks could be cleared and train services resumed.

The disaster was the second major train crash in the state of West Bengal in the past two months. On May 28, a passenger train derailed and was hit by an oncoming cargo train in a crash that killed 145 people. Authorities blamed sabotage by Maoist rebels for that crash.

Accidents are common on India's sprawling rail network, one of the world's largest, with most blamed on poor maintenance.